A home for the ayahs: from India to Britain and back again 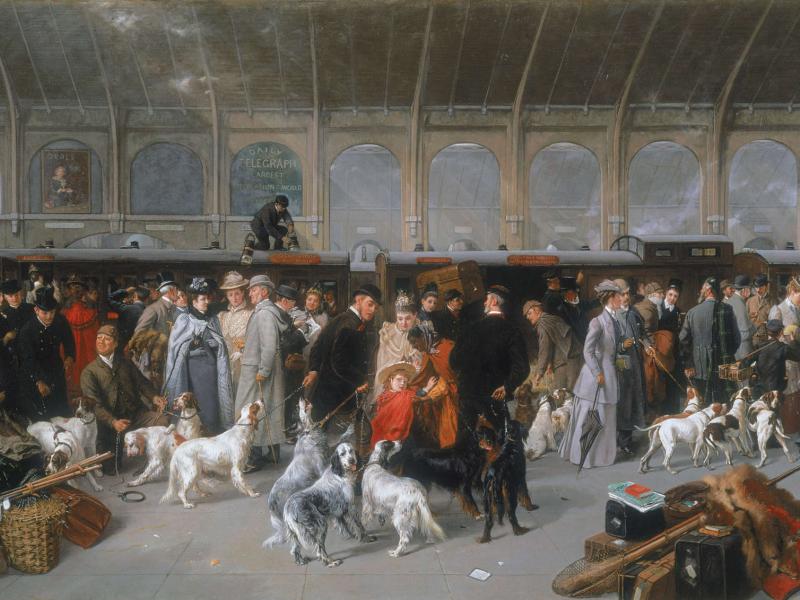 Created in the late nineteenth century, when the British Empire was at its height, covered some ten million square miles and comprised around 400 million people, this painting, ‘Going North’, vividly portrays a section of society in Britain and the vitality of a busy station. The scene depicts passengers at Kings Cross station, London, awaiting the train to Scotland at the beginning of the shooting season. Within the painting, just to the right of the centre of the canvas, among the bustle of railway passengers, luggage and dogs, we see a golden-haired little girl in a reddish shawl, clinging to her Indian ayah.

This ayah, working to fix the clothes of the girl in her care, is a painted reminder of the frequently overlooked roles of people from the British colonies in India, Africa and the Caribbean in the era of Britain's rapid industrial growth. Her presence is also, and importantly, a reminder of an often forgotten group of women who laboured for British people both in India and the British Isles: the ayahs themselves.

The founding of the East India Company in 1600 created employment for many English, Scottish and Irish people. The jobs the Company created were wide ranging – from clerks and traders to other administrators – and very desirable. Although Company jobs were not that well paid, because costs in India were generally low, employees could live very comfortable English-style lives while abroad.

One Indian visitor to Britain in the eighteenth century calculated that a servant in England cost eight times more than one in India. As a result, Company employees could afford very large teams of domestic staff. For instance, William Hickey, a lawyer who worked in Calcutta, had 63 servants. These large teams of employees included ayahs (nannies), and played an important part in creating the comfortable lives of Company staff. For many officials working in India as administrators, traders, lawyers or teachers, Indian servants and ayahs were more than just domestic help – they were also seen as marks of an opulent, successful lifestyle. Because of their sophistication, ayahs from Madras, so-called ‘Madrassi ayahs’, were most highly prized.

It was quite common for British families returning home to bring valued members of domestic staff with them to help with the journey or, when retiring, to permanently settle. The lawyer William Hickey brought his servant Munnoo back with him to Britain when he retired to Beaconsfield in 1808. Similarly, Warren Hastings and his wife imported four maids as well as two Indian servants when they returned to Britain. Charles Dickens even makes mention of women bringing their personal maids with them on their return trips in his novel David Copperfield (1850).

Many trips back to Britain were temporary. British families often sought to escape the Indian summer heat, and visited their home country between March and October, taking the long sea voyage on ocean liners that would carry them from India. After 1869 with the advent of steam-powered ships and the opening of the Suez Canal, such journeys became more routine as the journey was significantly shortened by some 4,300 miles.

On their seasonal visits to Britain, these families often asked their ayahs to accompany them or engaged the services of an experienced travelling ayah to look after their children and take care of their baggage and the memsahib. By the 1850s, as travel became more regular, the number of ayahs brought to Britain increased. It is estimated that between 100 and 140 travelling ayahs visited Britain every year.

Why did the ayahs agree to come? One important reason was economic necessity. It allowed the ayah to work her passage in both directions, from India to Britain and on the return trip. Another reason would have been their devotion to the family and especially the children under their care. Some could have also been motivated by a sense of adventure or a desire to see Britain. One ayah, Mrs Antony Pareira, travelled 54 times.

Once in Britain, the duties of ayahs were over and they were discharged, often without arrangements for their return home. Many had to advertise their services for a return passage on a ship bound for India. A few eventually found employment in Britain as parish registers and census records reveal. For instance there is a record in St Marylebone, in 15 April 1787, of Mary Ann Flora, ‘a native of the East Indies, aged 19’; in Woolwich, we have a record of the burial of Flora, ‘an East Indian’, on 26 May 1769. The 1871 Census for Ealing, Southall shows the name of Brinoo, a ‘Calcutta-born 49-year-old widow’, as a nurse and servant; and at Cheltenham, Christchurch, we find Ruth, ‘an adult Native of Madras’, an ayah in the employment of Colonel Rolandson. Interestingly, Ruth was baptised, the service performed in the Tamil language.

Many ayahs were dismissed without pay. They usually had no formal contract of employment and return passages agreed in India were not always honoured. While awaiting employment with a family going to India, the ayahs stayed in squalid lodging houses that charged high rent. An 1855 report drawing attention to their situation mentioned 50-60 ayahs living together in a disreputable lodging house on Ratcliffe Highway in the East End of London. Some ayahs were forced to beg in the streets for a passage back home. 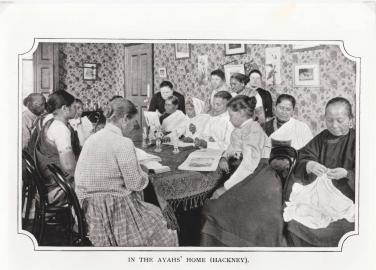 'In the Ayahs' Home (Hackney)', from George R. Sims (1901), Living London. Courtesy of The British Library
Christian charities became concerned for the welfare of the abandoned ayahs, which led to the founding of the Ayahs’ Home, which provided accommodation for both Indian ayahs and Chinese amahs (who did a similar job to ayahs). Established first in 1891 at 6 Jewry Street, Aldgate, East London, the Home was taken over by the London City Mission, who moved it to 26 Edward Road, Mare Street, in Hackney, East London in 1900. In 1921, the Home was relocated to bigger premises at 4 King Edward Road.

The Ayahs’ Home had thirty rooms. Brought here by their white British family employers, every year, around 100 ayahs lodged at the Home for a few days, weeks or even months. The Home also provided refuge for ayahs who were abandoned or ill-treated by their indifferent employers. Such instances were by no means uncommon.

This ayah was found in the streets in Hornsey [North London] by a lady on October 22nd last and brought here. The ayah says she and her boxes were turned out by her employer after being in their service for three years. The employer was seen by us, but refused to do anything further for the ayah.

The Home found placements for ayahs with families travelling out to India. The Home was run on the return ticket of the ayah, given to the Home by the family who had brought the ayah from India. It was then sold to a family needing the services of the ayah for their voyage to India.  The money raised was used for the ayahs' board and lodgings. While awaiting reengagement the ayahs spent their time reading, doing embroidery or walking in the park. The Ayahs’ Home was an important landmark. It was the only such institution in Britain with a named building.

How were the ayahs seen?

The British public considered the ayahs fascinating and tended to see them as picturesque. Ayahs were painted and photographed, as seen in the picture by George Earl (above). In contemporary literature, such as Frances Hodgson Burnett’s The Secret Garden, ayahs were often stereotyped as  ‘childlike’. Such perceptions were also present in events like the annual London City Mission Foreigners’ Fete. During the 1904 Fete a group of Indian ayahs, very much like school children of the time, were conducted to sing the hymn, ‘From Greenland’s Icy Mountains’, which they had been taught by the matron of their Home.

Indian ayahs, who mothered and cared for the children of British families both on land and on sea, contributed to life in India, aboard ships and in Britain. While only a few settled in the British Isles, they can be considered an important group of late nineteenth- and early-twentieth century migrants.