A London slum: Irish migration and its threat 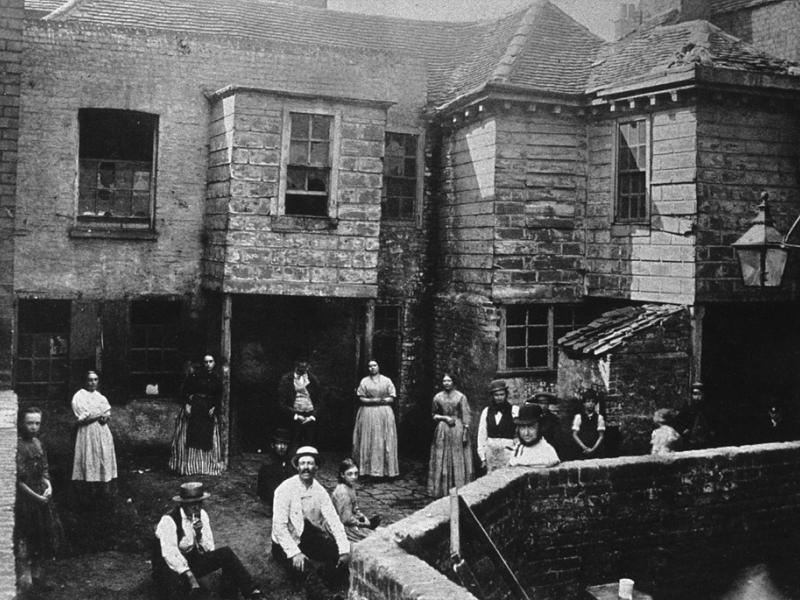 Jennings’ Buildings was known locally as the ‘Irish Rookery’ (a contemporary name for a criminal area).  It stood until 1873 on Kensington High Street, an area of London noted for its fine houses and aristocratic inhabitants. Kensington Palace, birthplace of Queen Victoria, stood opposite. The ‘miserable and ill-ventilated’ huts of this slum were in sharp contrast to its affluent surroundings.

A London slum in Kensington 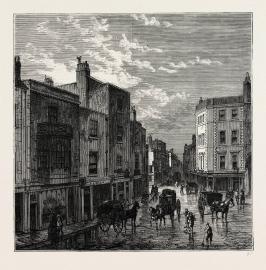 A 19th century engraving of Kensington High Street, London, in 1860 (Artokoloro Quint Lox Limited / Alamy Stock Photo)
Owned by the respectable and wealthy local Bird family, Jennings' Buildings consisted of 81 two-story wooden tenements grouped around 5 narrow courts. The Buildings were immensely overcrowded with over 1,000 people living in accommodation meant for only 200.  They were filthy indoors and out, without drainage and with only 49 toilets for all inhabitants.  As a consequence, ‘human excreta lie all over the courts, in every corner of the place.’  And, not surprisingly, the death rate of Jennings’ Building was twice that of surrounding Kensington. Indeed, the average lifespan of the Buildings’ inhabitants was 17 years as opposed to 48 years for the middle and upper classes. One observer of the Buildings noted ‘the naked feet of the children, and the ragged and dissolute looks of men and women’, which presented ‘a painful contrast to the general decency’.  The picture of Market Court, in the main source above, taken in 1865, appears to support this description. 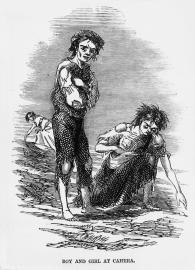 This illustration from 1846 shows a starving boy and girl raking the ground for potatoes during the Irish Potato Famine, which began in the 1840s (Courtesy of Hulton Archive/Illustrated London News/Getty Images)
In 1861, of the approximately 1,000 inhabitants of Jennings' Buildings, 800 were either Irish migrants or their children. They made up part of the 100,000 Irish migrants in London and the 805,000 Irish migrants in mainland Britain. There had always been a steady stream of migrants coming from Ireland. However, by the late 1840s the number had massively increased. A vast majority of new migrants were driven by hunger. In 1845, the Irish potato crop, the staple food for most of its eight million inhabitants, was destroyed by blight. Mass starvation ensued. The British government expected Ireland, already a poor country, to support its own starving population but it was an impossible task. Between 1846 and 1851, it is estimated that one million Irish people died of starvation. Furthermore, Irish landowners took the opportunity to evict small tenant farmers from their land in order to grow more efficient crops. In one area of Ireland alone, 4,000 were evicted in a few months. Small wonder that between 1846-51, two million Irish emigrated, many to North America, but a very large number to the British mainland. 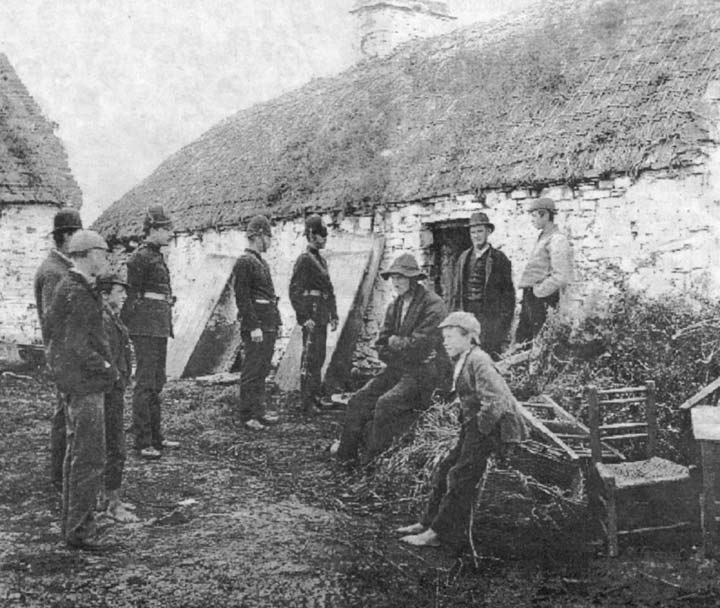 An image of an Irish eviction by police

The threat of the ‘Irish Rookery’

The male migrants of Jennings’ Buildings found work in Kensington helping to construct housing for this rapidly expanding area of middle-class London. They also worked as fruit pickers in surrounding orchards. Many of the women worked as laundresses, cleaning the clothes of their wealthy neighbours. Such work was not always reliable and some had to depend upon local government poor relief, often in the Kensington workhouse, when work was not forthcoming. A few turned to petty crime.

Despite their hard work and their contribution to the Kensington economy, including paying high rents for their slum dwellings, for the most part the inhabitants of the Buildings were seen as outsiders.  This was not only because they were Catholics in a Protestant country but also because the Irish working class, generally, was believed not to share respectable British values.  If they drank and found recreation on the streets of Kensington this was widely viewed as a moral failing of Irish migrants rather than a result of their having no room in their homes to seek relaxation as did the more wealthy.  If this made them more vulnerable to arrest for public order offences this was frequently viewed as proof that they shared a criminal culture. The local newspaper, the Kensington Gazette, wrote in 1855:  ‘in the heart of town there has been an acre long desecrated as the haunt of poverty and disease, dirt and crime.  To point out a spot of equal social deformity is difficult—to discover one worse is impossible.’

In 1873, the local Medical Officer reported that the slum’s lack of lavatories was actually ‘an advantage, regard being had to the character of residents.’  Indeed, he believed that the ‘difficulty was in getting the inhabitants to use them as ordinary persons would.’  He concluded, ‘Altogether the “Buildings” were well looked after, and if they were objectionable, it was by reason both of the bad class of houses, for which the present generation is not responsible, and the habits of the people who inhabited them…’.  By finding the Buildings’ inhabitants largely responsible for their own misfortune, the medical examiner was simply echoing widely held views that the Irish poor in general were undeserving of help. In other words, their misery was believed to be brought on by their own failings rather than any material misfortune that might have befallen them.

In all, the presence of Jennings’ Buildings with its population of Irish immigrants and their descendants was viewed by many to pose the threat of bringing disease, disorder and criminal activity to respectable Kensington. The threat which Jennings’ Building was thought to pose is summarised by this quote from the West London Observer newspaper:

‘The inhabitants consist chiefly of the lower order of Irish… They are continually creating disturbances, assaulting the police, and by their violent and disgraceful habits the inhabitants of Kensington are continually kept in fear of some outrage. They are, in fact, the terror of the neighbourhood.’

From slum to grand house

In 1873, a wealthy individual, Albert Grant, also an Irish migrant but a banker and a friend of royalty, bought the Buildings from its highly respectable, local owners. Grant bought the Buildings in order to demolish them and make way for the construction of Kensington House, which was, on completion, the most expensive house in London. The former residents moved out into other London slums and ten years later Albert Grant went bankrupt and died in relative poverty.

Kensington House, whose grandeur can be seen in the picture below, was itself demolished in its turn.

Image courtesy of the Royal Borough of Kensington and Chelsea Archive

Liz Curtis (1984), Nothing but the Same Old Story: Roots of Anti-Irish Racism – illustrated and very accessible

Jennifer Davis (1984), ‘Jennings’ Buildings and the Royal Borough: The Construction of an underclass in mid-Victorian England’  in D. Feldman & G. Stedman Jones (eds.), Metropolis London: Histories and Representations since 1800

Reports of the Medical Officer of Health for Kensington, 1856-1873