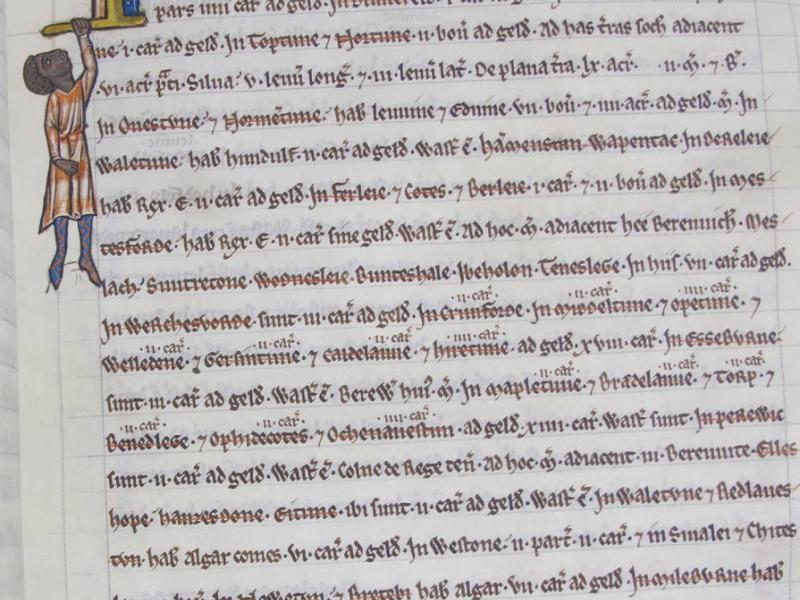 The entry for Derbyshire in an abbreviated version of the Domesday Book – the Domesday Abbreviato – seems to contain the image of a black man.

This image invites many questions, including: what was its purpose? how did it reach early thirteenth-century England? and what might it have meant to the people who saw it at the time?

(Source information: the image is provided courtesy of The National Archives, ref: E 36/284)

The Domesday Abbreviato, also known as the Exchequer Abbreviato in the National Archive, is one of three condensed, abbreviated versions of the Domesday Book produced in the thirteenth century. The Domesday Book was the survey of England ordered by King William the Conqueror in 1085, principally to find out who owned what land and resources so that the King could levy taxes.

The survey covered 37 counties and named 13,418 places in about two million words. Within it, the Domesday Book gave the names of landholders in each county, the manors that each landholder owned, their values and the names of their subtenants, and the names of many boroughs as well as details of their customs. It also included the number of freemen and others in each manor and the resources available including land taxable uses, plough teams, livestock, mills and supporting equipment and buildings.

The format of the Domesday Book was not one that could easily be updated, and the mass of detail in its text buried the essential information about landholding, manors and titles which was important for levying taxes. These key details were extracted into summarised versions. These abbreviated versions were far more portable and easily reproduced and contained the essential information needed for immediate administrative use. 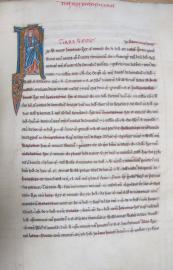 Hereford entry in the Abbreviato (Courtesy of The National Archives)
The Domesday Abbreviato is sumptuously illustrated – a document fit for a king. The initial letters or capitals of each county are picked out and illuminated in gold, red and blue, with illustrations of the King, archbishops, bishops, barons, earls and many mythical beasts.

The entry for each county opens with the ‘TERRA REGIS’, ‘the King’s land’, with its capital letter beautifully painted. The size, colouring and detail of that letter is a direct measure of the importance of the landholder whose property is summarised. The capitals for the entries describing the King’s holdings include gold and are always the largest, most colourful and ornate.  The capital letters for other entries are much more modest and simple in two colours – red and blue. Red lines indicate the importance of each property in the entry. The King’s entries, as is to be expected, have more red lines than any of the entries of other landholders.

The capital letter for the entry for Derbyshire has a man of African descent holding onto a letter ‘I’. Its colouring and size indicate that it is the opening letter to an entry summarising the King’s property in the region.

An African man in thirteenth-century England?

Why might the Abbreviato feature an image of an African man?

Like many other islands, Britain has a long record of migration, which dates back thousands of years. An African presence can be specifically dated back to the migration to Britain of the Roman Emperor Septimius Severus, who was born in modern-day Libya.

An African presence in Britain dating to around the same time as the Exchequer Abbreviato was discovered when a skeleton was examined by the BBC History Cold Case team. The skeleton was found to have come from a medieval Christian cemetery in the grounds of a monastery in Ipswich. Carbon dating, bone analysis and DNA tests revealed the man was born sometime between 1190 and 1300 in North Africa and that he had lived in Britain or an equally cold, damp climate for at least the last ten years of his life. Nine other African skeletons have been found in the Ipswich cemetery and these people seem to have come from sub-Saharan Africa.

Close-up of the Derbyshire man (Courtesy of The National Archives)
For almost two hundred years after 1095, Europeans waged war against Muslims in an attempt to take control of the lands around Jerusalem, in what we now call the Middle East. These wars have become known in the West as the Crusades. The battles created great hostility between the Islamic world and Christendom but also, and unintentionally, they resulted in a flow of culture and ideas from East to West, and some scholars argue that the Crusades could have played a part in bringing these Africans to Britain.

They may have come to Britain as prisoners captured during one of the many Crusades during the period. Alternatively, they may have come to England as visitors, as there were sub-Saharan Christians from what is today Sudan and Ethiopia who took part in the Crusades on the side of Europe against the Muslims of the Middle East.

The scribe who drew the image in the Abbreviato might have seen an African man who had come to England as a prisoner or a visitor following one of the Crusades during the period.

What did the image of the African man mean at the time?

To understand what the image might have meant at the time, we can compare its representation with other figures we know in the Exchequer Abbreviato. When we see a man in a film or a play wearing a pinstriped suit and tie, we can be fairly certain that he represents a business man. Similarly, we have some idea of the status of the man in the image in society from what he is wearing, when his clothes are compared to others in the Exchequer Abbreviato.

Since Roman times, long flowing clothes had denoted high rank, whilst the short tunic worn over hose was normally the dress of peasants and labourers. If we compare the African’s dress with how the kings are dressed elsewhere in the Abbreviato we can see, for instance, that the kings (see below image) have long, flowing dress reflecting high status, while the African man wears the short tunic indicative of low status. From this we can guess that the African man represents perhaps a peasant or a labourer or someone we might call ‘working-class’ today. The purpose of the image was to indicate that the Exchequer Abbreviato entry for Derbyshire manors, opening with the capital ‘I’, belonged to the King. The scribe for this entry might have seen a person of African descent, who came as prisoner or visitor following one of the Crusades and he pictured the person as a peasant or labourer.

The Domesday legacy – An online description of the Domesday Book created by the National Archives.

Above is a description of what we know about the African man in the Abbreviato, but there are other questions that might be asked about the image.

As mentioned above, and as we know, clothing, positioning, and other personal features in artworks can tell us a great deal about a figure’s intended status and sometimes play an important representative function.

When analysing the African in the Abbreviato, we can probe further into his appearance and consider the following: