The Anglo-Saxon invasion and the beginnings of the 'English' 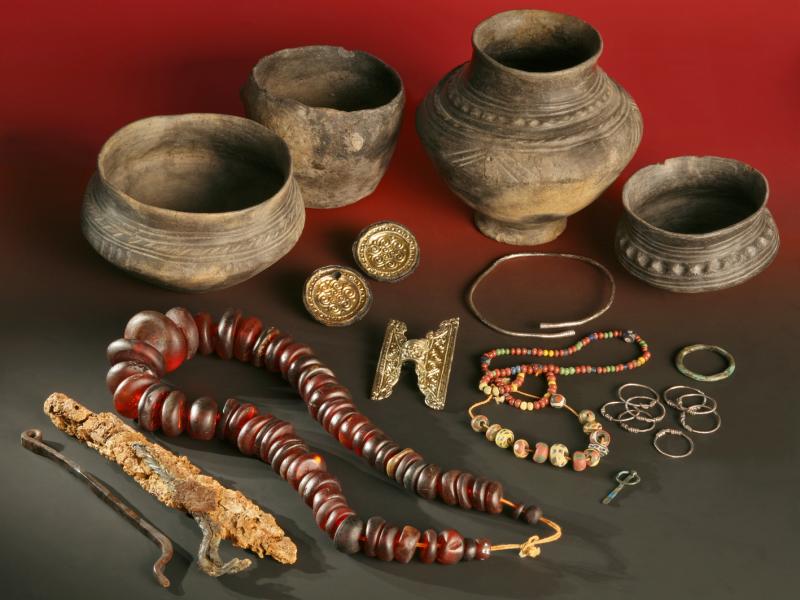 Despite advances in genetic research, archaeological evidence is still our main source of information about the early inhabitants of the British Isles. There is plenty of it, but it isn’t always easy to interpret.

There was much change in Britain during the fifth century, caused by the economic and political disruption that followed the end of Roman rule, as well as the influx of new ideas and new people we tend to call the 'Anglo-Saxons'. Our understanding of the origins and the movement of these new migrant peoples, and their impact on Britain in this century, is slowly altering.

By analysing similarities between the material culture (tools and objects) found in Britain and in Northern Europe, we have been able to track Anglo-Saxon influence. The pots and material artefacts above, from Issendorf, Northern Germany,  are closely similar to those found in Norfolk cemeteries in Spong Hill, near North Elmham. These parallels might suggest that the Anglo-Saxons carried their tools with them from Germany and settled in Norfolk. Perhaps. But the picture is a bit more complicated than that.

During the fifth century AD Britain ceased to be part of the Roman Empire and became a group of small warring territories, from which eventually developed the medieval kingdoms of England, Scotland and Wales. This process involved population movements around the Irish and North Sea coastal regions, of which the largest was that of the Anglo-Saxons from northern Germany and southern Scandinavia into eastern England.

Two early accounts of the Anglo-Saxon migration were written by authors who were both Christian clerics, Gildas and Bede. Gildas was British and wrote in about 500AD, probably in south-western Britain. He describes in his account the departure of the Roman army, followed by the arrival of bloodthirsty invaders, who killed the native British population or drove them into exile.

Two hundred years later Bede, an Anglo-Saxon monk in the monastery of Jarrow, wrote The Ecclesiastical History of the English People, which he completed in 731AD. He drew on Gildas's work, but in his own account describes the Anglo-Saxon invaders, his own ancestors, as those carrying out the just vengeance of God and therefore being a people chosen by God.

Bede gave a precise date, 449AD, for the first arrival of the Anglo-Saxons and he said they came from three tribes: the Angles, Saxons and Jutes, who themselves came from different parts of Germany and Denmark – the Angles were from Angeln, which is a small district in northern Germany; the Saxons were from what is now Lower Saxony, also in northern Germany; and the Jutes were from Jutland, now part of Denmark. According to Bede the Angles settled in East Anglia, the Saxons in southern England, and the Jutes in Kent and the Isle of Wight.

The name ‘Anglo-Saxon’ comes from the fusion of the names of two of these peoples. The terms ‘English’ and ‘England’ come from a further shortening, all terms coming from the name of a small district in northern Germany, Angeln.

Bede’s story has been so influential that many scholars have taken it as their starting point rather than as a piece of historical evidence to be tested. The tribes Bede names in his account have been understood as the names of distinct peoples, who arrived in separate groups, all from specific places. But Bede was explaining regional differences that existed in his own day, in terms that made sense to him, centuries after the migration had actually taken place. The archaeological evidence suggests, instead, that Britain’s people were much more mixed. The incomers did not all come from the same place at the same time in separate groups and many of the regional differences have other explanations.

Also, any version of this migration story that presents it as the rapid and complete replacement of Britons by Anglo-Saxons shortens a process that took centuries, and a different course in different parts of Britain. Crossing the North Sea by boat was not like the early European journeys across the Atlantic to discover America; they were not difficult, unusual and dangerous voyages to unknown lands. People had been travelling by boat around the coasts of northern Europe for thousands of years, and trade across the Channel was established long before the Romans arrived. During the Roman period people had moved around the empire, many of them coming to or travelling from Britain, and movement didn’t end completely once Rome was not ruling Britain any longer, even if the big official shipments of goods and money did stop. The Britons knew about the peoples of Germany and Scandinavia as traders, slaves or pirates, and the Anglo-Saxons knew about the land they decided to come to, and once they arrived they were able to make repeat journeys to return home or to bring more of their family over.

The truth about Anglo-Saxon migration

There has been much debate about how many Anglo-Saxons arrived and how many of the native Britons survived their invasion. The key issue in this debate is the extent to which change in culture and language was caused by a large scale invasion or whether or not the social, economic and political changes we know took place, combined with native adoption of a Germanic lifestyle and language after the disintegration of the Roman Empire, were the result of a much smaller incoming group.

Language, archaeology and genetics have been used with varying success to expand, confirm or contradict the story of an all-conquering Anglo-Saxon migration provided by Bede and other early medieval historical sources. Figures of between two and six million have been suggested for the population of Roman Britain on the basis that the scale of land use and density of settlement shows it was as great or greater than the population listed in the Domesday Book in 1087 (which has been estimated at around two million) (see: 'An African presence in thirteenth-century Britain'). There was probably a population decline at the end of the Roman period but we can only guess at actual numbers.

In some areas, for example Norfolk and the Vale of Pickering in Yorkshire, the density of Anglo-Saxon settlement has been shown to be comparable to the population density of the later Middle Ages. In other regions, for example in the north of England near Hadrian’s Wall, pollen analysis suggests regrowth of the woodlands cut down for timber during the Roman period that could have resulted from a fall in population.

Even if the name ‘Angle’ was applied to people living in a larger region of north Germany and Denmark there were not enough of them to wipe out and replace all of the people already living in the east and south of Britain. The story is more complicated than that, but it is certainly a story about people moving and arriving in a new country where they and their descendants had a big impact.

As a result of the Anglo-Saxon invasion, the British and/or Latin spoken in lowland Britain disappeared and was replaced by Old English, the direct ancestor of modern English (see: 'Making peace'). Rural settlements in early Anglo-Saxon England included one new imported type of building, the grubenhaus, which had a large pit under the floor. Burials also changed. In addition, new types of dress, weapons and pottery appeared in Britain during the fifth and sixth centuries. Many of these were very like the brooches, pots and weapons being used and buried on the other side of the North Sea.

Clearly a new people brought their belongings and ideas about how to make pots, bury the dead and build houses.  A lot of the people buried with the new types of brooches or pots certainly were immigrants but even these proportions are hard to determine because local people could also have used these things: some ‘Anglo-Saxon’ brooches were  probably worn by women whose ancestors were British, even if  their descendants thought of themselves as ‘Anglo-Saxons’.  Some ‘Anglo-Saxon’ cremation pots may have held the remains of British people as well as those of Germanic immigrants.

When we look at regional patterns we can see they don’t have the simple explanation Bede gave. 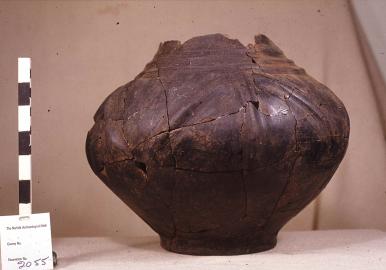 A Spong Hill, Norfolk, burial pot. Courtesy of Norfolk County Council Historic Environment Service
The settlement of Jutes from Denmark in Kent may be reflected in gold pendants called 'bracteates', characteristic of southern Scandinavia in the later fifth century, but other ‘Kentish’  jewellery, pots and glass vessels are like those found across the Channel, used by the Franks in the Rhineland and northern France, with whom Kent was in close political and economic contact in the sixth and seventh centuries. The ‘Angles’ of East Anglia were buried with dress fasteners and pots of types that had origins in different places around the North Sea, including both ‘Saxon’ and ‘Anglian’ regions.

Our current picture of the Anglo-Saxon migration to Britain is that in some regions like Norfolk there may have been many incomers who arrived early in the fifth century, but in other regions migrants arrived later and in much smaller numbers. Some of the incomers were successful war bands who met little organised resistance in the parts of Britain closest to their homelands; elsewhere the local population remained but its leadership either eventually adopted Anglo-Saxon language and customs or was replaced, leading in turn to the Anglicization of their people.

Anglo-Saxon migrations did contribute significantly to the population of England but perhaps not on the scale that has sometimes been suggested, and their impact was not the same in all parts of the country. Many people have Anglo-Saxon roots, but where those roots stretch and the ways they are entangled, is more complicated than Bede and others would have us believe.

Helena Hamerow and David A. Hinton (eds.)(2011), The Oxford Handbook of Anglo-Saxon Archaeology

Catherine Hills (2003), Origins of the English

The finds from Spong Hill have been published in reports in the series East Anglian Archaeology  and in Catherine Hills and Sam Lucy (2013),  Spong Hill Part IX: Chronology and Synthesis

Recently, scientific evidence has been used to try to work out the proportion of incoming migrant 'Anglo-Saxons' to other post-Roman residents of Britain. Unfortunately, research based on modern DNA has produced some contradictory results, either arguing that most modern British populations are descended from the prehistoric inhabitants of the islands or coming to the opposite conclusion that the male British population in the eastern part of Britain was all but wiped out by invaders.

More recent research is based directly on the skeletons of people who lived at the time, extracting ancient DNA and isotopes from their  teeth, which can show whether individuals grew up where they were buried. These techniques may eventually provide enough examples to give conclusive answers.

Migration and conversion: The Christianisation of Britain