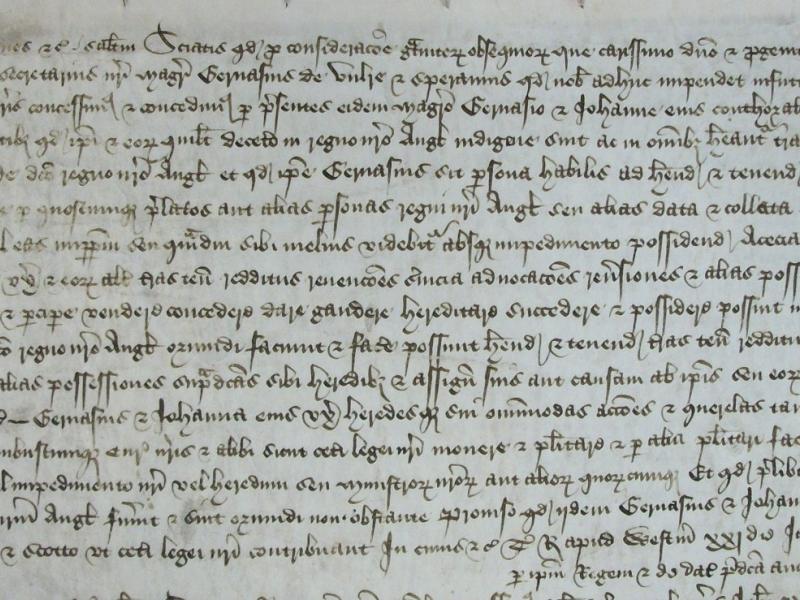 The letter of denization granted to Gervase le Vulre, the King's French Secretary, in 1441.

The king to all to whom [these letters shall come], etc, greetings. Know that, in consideration of the gracious service that our blessed and faithful secretary, Master Gervase de Vulre, has hitherto given to our most beloved lord and progenitor, and also to us, and which we hope he will do in the future, we, of our especial grace, for us and our successors, have given and do give by these present [letters] to the same Master Gervase and to Joan his spouse, both originally deriving from our realm of France, that they and each of them shall henceforth be natives in our realm of England, and shall in all things be considered, treated, held and reputed as our true lieges of our said realm of England, and that Gervase himself should be a suitable person to have and hold offices and administrations given and collated to him by us or by any prelates or other persons of our realm of England or elsewhere, or to which he has been or will be given or collated, possessing it or them without impediment in perpetuity or for as long as seems good to him. And also that Gervase and Joan his wife, and either of them, may be able to demand, purchase, buy and receive, sell, grant, give, enjoy, inherit, succeed to and possess lands, tenements, rents, revenues, services, advowsons, reversions and other possessions whatsoever freely in all things, just as our other true lieges born in our said realm of England do and are able to do, having and holding the abovesaid lands, tenements, rents, revenues, services, advowsons, reversions and other possessions to them, their heirs and assigns, without reason from them or either of them, in perpetuity and otherwise. And that the aforenamed Gervase and Joan his wife, and their heirs, shall be able to move and plead all manner of actions and complaints, both real and personal or mixed, in any of our courts and elsewhere, in the same manner as our other lieges, and to be impleaded by others, freely and wholly without interference or impediment from us or our heirs, or from our ministers or any others whatsoever. And that notwithstanding that the aforesaid Gervase and Joan did and do originate from outside our same realm of England. Provided that the same Gervase and Joan should perform liege homage to us, and contribute lot and scot in the same manner as our other lieges. In [witness] of which etc.

By the king himself and of the date aforesaid, with the authority of parliament.

(Source information: the image has been provided courtesy of The National Archives, ref: C 66/450, m. 12)

Migration to Britain in the late Middle Ages

The late Middle Ages was a period of what we could call 'quiet' migration. There were no-large scale migrations in or out of England, such as had been seen in the Norman Conquest of 1066 or in the expulsion of Jewish people from Britain in 1290 (see: 'Poems of protest'). Yet immigration still continued on a small scale for numerous reasons: for trade and work; for study; to flee persecution in one’s own homeland; or as a response to natural disasters such as the Black Death which struck Europe in 1348-9 and the major floods in the Netherlands in 1421.

Gervase le Vulre was one of these ‘quiet’ immigrants. He came to England in 1436 and made the country his permanent home in 1441, when he took out the letters of denization (see main source above). Gervase had already been employed by the English government in France as one of the king's ‘French secretaries’: that is, officials who could speak and write fluent French and helped with confidential legal and diplomatic business for the English king. The document shows that Gervase had moved to England with his wife Joan. It declares that he was French, but we know from other documents that he was actually Flemish (that is, from modern-day Belgium) and still owned land in Flanders when he died in 1465. Since Flanders was controlled by the duke of Burgundy, who was hostile to the English at this time, Gervase may have felt that his chances in England were improved by representing himself as one of the French people loyal to the cause of Henry VI.

Gervase’s career was shaped by the Hundred Years War (1337-1453). For much of this series of hostilities, England held significant parts of northern and Western France (especially in Normandy and Gascony) and had important allies elsewhere (for example, in Brittany). As the war turned bad for the English and they began to pull out of these regions in the 1430s and 1440s, some local people joined them and also began to make their way across the Channel. From tax evidence, we can positively identify 3,694 named people from France who are known to have been resident in England at some stage between 1440 and 1487. We also know that 856 French people who came to England between 1370 and 1550 obtained letters of denization. These numbers may seem very small, but they are clearly only the tip of a much larger iceberg. Furthermore, the entire population of England for much of the fifteenth century was only around 2.5 million. If we add up all the foreign-born people appearing in these records  – individuals of many different nationalities from all across Europe, and even beyond – and adjust the figures to take account of omissions, it is quite possible that first-generation immigrants comprised anything between 2 and 4 per cent of the population. We would need to multiply that figure up again each time to represent second- and third-generation immigrants, and so on.

Gervase le Vulre was therefore only one of many people who chose to move to England from other countries in the fourteenth and fifteenth centuries.

Letters of denization were official government grants allowing a person born abroad to be treated as if they had been born in England. The Crown first started issuing them in the 1370s, in response to the desire of some wealthier immigrants to have a reasonably full range of legal rights. Recipients were required to renounce their former loyalties and take an oath of allegiance to the king of England. In return, they were to be treated in more or less the same way as any English subject born within the realm. They and their descendants were entitled to own land, property and other possessions in England and to have their legal cases dealt with in English courts.

Denization was not quite the same as the later process of naturalisation, which became available in the sixteenth century. Denization allowed many rights, but it did not necessarily exclude people from paying customs duties (on exports, as well as imports) at the higher rate normally charged to foreigners. Nor did denization necessarily allow the recipient to participate in parliamentary elections: it was only naturalization that later explicitly allowed that right (see: 'Blood libels, castration and Christian fears').

The cost of letters of denization varied considerably depending on the social status of the recipient. Some people paid around £2, but occasionally the fees could rise as high as £50. To put that into context: the annual net income of a minor aristocrat at this time was between £50 and £100, and the annual gross income of a skilled worker would be around £5. Only wealthy merchants usually had the ready cash to pay ‘up front’ for such privileges, and many other people probably had to borrow the money to pay the fees, perhaps from fellow foreigners, who ran many of the credit services available in England at the time.

As a result, many immigrants of lower social status who appear in the tax records of the period, such as artisans, craftsmen, labourers and so forth, neither needed, nor could afford, letters of denization. The majority of resident aliens lived in England on the goodwill of their neighbours. It was not until the 1540s that this larger group of skilled and unskilled migrants was obliged to obtain denizations. Henry VIII ordered all French-born people living in England to leave the kingdom, or to obtain letters of denization allowing them to stay. Henry was seeking to protect England's borders from French spies, and denization was one means to control the French population living in England, in particular on the south coast.

The letters of denization for Gervase le Vulre survive because, as was normally the case, he was required to have his grant registered in the king’s Chancery, on a record called the Patent Roll. As is normal too, the copy of the grant that was given to Gervase, with the king’s seal attached to it, has been lost over the centuries. The Patent Rolls are made of many pieces of parchment sewn together to form a long row many metres long, and then rolled up so they could be stored. These rolls are now kept at The National Archives in Kew and can be seen by the public. They are an important source because they tell us about the immigrants who wanted their residency in England to be made official and had the wealth to do so.

England's Immigrants: downloads for teachers: The University of York and The National Archives have used the England's Immigrants database to produce resources to support the teaching of British immigration in the middle ages and early Tudor period.

The website and database England's Immigrants, 1330-1550 tells the stories of some 64,000 people born outside England who moved to and lived in the country in the late Medieval period. These included Welsh, Irish and Scots, as well as large numbers from France and the Low Countries (the modern-day Netherlands) and smaller but highly visible groups from Scandinavia, Germany, Spain and Portugal, Italy and Greece.

The individual case studies on the website highlight some of the personal stories that this project has been able to uncover. The database is easy to navigate and has many visual functions, including graphs and maps that can be generated from the data.

The website also has a section for teachers, with links to teaching resources on The National Archives' website and other useful resources for studying migration in the late Middle Ages. These resources include lesson plans with supporting materials, contextual essays and podcasts.