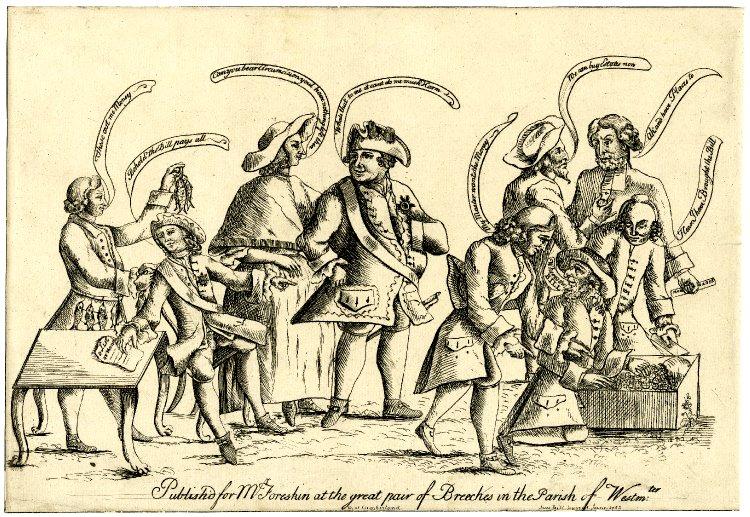 Satire on the Jewish Naturalization Act, suggesting that the Duke of Cumberland is to be circumcised or castrated, ca. 1753 (Courtesy of The British Museum)
Show source description

Lettered with captions in the image and 'Publish'd for Mr Foreskin at the great pair of Breeches in the Parish of Westmter', this satirical cartoon is warning against the danger of passing the ‘Jew Bill’, i.e. the Bill to naturalise foreign-born Jews of 1753. It sees the naturalisation of foreign-born Jews as a threat to both the moral and physical integrity of the British nation and contrasts Christian values with the corruption which it was felt would follow if Jews were to gain political status and power.

Unlike the Tories of the time, the Whigs, who were friendlier to commercial trading interests, are portrayed to the left of the picture as willing to betray Britain’s national interest by passing the bill in order to gain access to the financial credit which some wealthy foreign Jews could offer. The Tories, whose values were more firmly rooted in landed aristocratic wealth, saw the Whigs as selling the nation to hostile foreign interests and used anti-Semitic slurs in their successful propaganda campaign to repeal the Act in 1754.

The Jewish practice of male circumcision is used in this cartoon as a symbol for political castration which is why the title refers to ‘Mr. Foreskin’ (as the foreskin of the penis is removed from Jewish male babies eight days after birth). The integrity of the nation (body politic) is harmed just as the integrity of the baby’s body is seen to be compromised by circumcision. This explains too why the woman in the picture is asking her husband if he minds being circumcised. These are all allusions to the Jews rejecting Christianity. Jews in this cartoon, all bearded males, are pictured on the right and include a Jewish pedlar kneeling over a box of trinkets. Most Jews in Britain in the eighteenth century would have been poor or middling petty tradespeople rather than the wealthy businessmen who lobbied the Whigs for naturalised status.

The return of Jewish people to Britain

Jewish people had been banned from British soil since their expulsion in 1290 up until their formal readmission under Oliver Cromwell in the 1650s. Many of those who first settled in the late 1600s were Sephardi or Spanish Jews, i.e. refugees from Spain and Portugal who had fled persecution from the Spanish Inquisition and settled in Amsterdam. From Amsterdam, a small number of Sephardi Jews made their way to England. Some Sephardi Jews benefited from international trading activities. Jewish people were generally banned from owning land or from participating in guild crafts in Europe. As a result, many went into trade, a few of these becoming wealthy and gaining real influence. Despite success, even wealthy Jewish traders were not entirely socially accepted in elite circles.

Sephardi Jews were followed to England by Ashkenazi Jews from Germany in the mid-1700s. Ashkenazi Jewish refugees, from the ghettoes of Germany and Central Europe, were generally poor pedlars and petty tradesmen, but even among this group were one or two prosperous banking families.

The movement of wealthy merchants to Britain was an attractive prospect to Whig politicians who wanted to capitalise on their trading links and access to capital in an expanding Atlantic economy. To make the most of the arrival of these migrants, the Whigs proposed a Bill which would enable property-owning foreign-born Jews to petition Parliament to become naturalised by a Private Act. Naturalisation would allow new migrants to become full British subjects, and to purchase, bequeath, and inherit property freely. Unlike denization, which was granted by Royal Patent, not by Parliament, naturalisation afforded more extensive rights regarding property inheritance. Under denization, property could not be passed on to one’s children. Denization had earlier been available to a handful of Jews, but naturalisation was seen as a larger concession. As with denization, however, the expense of applying for naturalisation meant it would prevent all but the wealthiest from attempting it (see: ‘Becoming English’).

Opposition to the naturalisation of Jews

Though passed by the Whig government in 1753, Tory opponents waged a massive and openly anti-Semitic propaganda campaign against the Act. Tory press and pamphlet campaigns revived medieval anti-Semitic prejudices and falsely held Jewish people collectively responsible for the crucifixion of Jesus. These pamphlets claimed that Jewish people sacrificed gentile children for their blood (aka the ‘Blood Libel’) and were determined to corrupt Christians.

The pamphlets argued: How could non-Christians (who were to be eternally damned to hell for their continuing rejection of Jesus Christ as the son of God) be allowed in theory to become judges and political representatives over actual Christians? If, they argued, Jews were admitted as full British subjects, they might demand mass male circumcision—a charge which connected circumcision with castration on both a personal and political scale (see main source above). The campaign also condemned Jews for their different customs and appearance and linked them to economic corruption, a charge also made against the Whigs.

A temporary victory for prejudice

In the event, the campaign was successful, the Naturalisation Act was repealed in 1754, and Jewish people were not admitted to fully equal political status in Britain until the mid-nineteenth century, in 1858.

Written by Dr. Madge Dresser, Associate Professor of History, University of the West of England