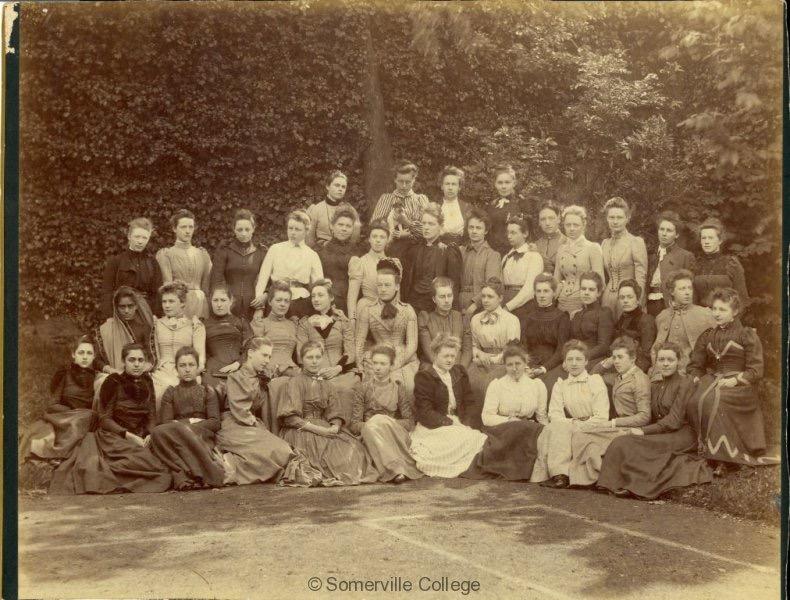 This photograph shows the Indian student Cornelia Sorabji at Somerville College, Oxford, in 1891. Sorabji is seated on the far left in the middle row in her sari. It also shows two other Indian students, Bamba and Catherine Duleep Singh. Somerville was a college for women only.

From the middle of the nineteenth century, the small resident Asian population in Britain was augmented by an increasing number of Indian students at British universities. Indian students at British universities included Mohandas Gandhi, Jawaharlal Nehru and Muhammad Ali Jinnah, the leaders of the Indian independence movement in the 1920s and 1930s, as well as many other lesser-known young scholars.

Why attend a British university?

Qualifications from British universities were essential to obtain a job with the Indian government, including the Indian Civil Service. British qualifications were also essential for other professions, including medicine, law, education, the police and engineering. A perfect example of the importance of movement to Britain for study is the fact that the Indian Civil Service exam was only held in London. Even degree-level education obtained from an Indian university was not considered good enough for local professions. Parents, therefore, at great expense and hardship, as there were very few scholarships, sent their sons and sometimes their daughters away to study. In the early years of the nineteenth century, Indian students numbered 100-200 and were largely confined to London, Edinburgh, Oxford and Cambridge. There were also many students from Africa and other countries that Britain had colonised, although the largest single group of overseas students were Indians. By 1900, over 700 male and female students from the Indian sub-continent were registered at British universities. By 1930, 5,408 students from abroad studied at British universities with, as a snapshot, 1,800 from India, 532 from South Africa and Rhodesia (now Zimbabwe), 212 from Canada, 190 from Australia and 134 from New Zealand.

Who was Cornelia Sorabji?

Cornelia Sorabji was an Indian student in the nineteenth century. Born into a Christian Parsi family in Nasik in 1866, Cornelia studied at Deccan College. Despite the fact that she had gained a First in her finals, Sorabji, as a woman, did not qualify for the Government of India scholarship. In 1889, she came to England to study Medicine at Somerville College, Oxford, but while in the midst of her studies she changed to Law because she wanted to help the purdahnashin (women behind the purdah, who were confined to the house and secluded by religious and social customs). These women suffered injustices and were even cheated of their property rights by men because of their unequal social positions.

In India, as rulers, the colonial-era British considered themselves racially and culturally superior to their Indian subjects and generally did not interact socially with them. Indian students in Britain, however, received a more ambivalent welcome. As the only Indian woman student at Somerville College, until the arrival of Bamba and Catherine Duleep Singh in 1890, Cornelia Sorabji was granted some special privileges. She was, for instance, allowed to have a fire in the morning to dress by – but alongside this her tutors also patronised her. She recalled that ‘old ladies were always trying to convert me’; when she told them that she was already a Christian their reaction was that she looked ‘so very heathen’.

Life for women students in Victorian Britain was beset by barriers. Among them, until 1893, they had to be accompanied to their lectures by a chaperone and, although they sat exams, they did not receive official degrees. The greatest hurdle Cornelia Sorabji had to face was linked to this. It was proposed that she would take her Bachelor of Civil Law exams alone at her own college, supervised by the warden, and not in the schools with the male students. This was because the London examiner refused to examine a woman. This infuriated Sorabji as she saw this as devaluing her work. She felt that some day, when women were allowed to take a degree, hers might be withheld, because she had not sat her exams with the men in the schools. She put up a fight and finally by a special decree passed by the university she was allowed officially to sit the exam with the men.

Sorabji returned to India in 1894 and worked as a legal adviser for women with property cases. She was awarded the Kaiser-I-Hind Gold medal in 1909 for her work with and for women. In 1930 she returned to live in Britain. She died in 1954, aged 88.

A home for the ayahs: from India to Britain and back again