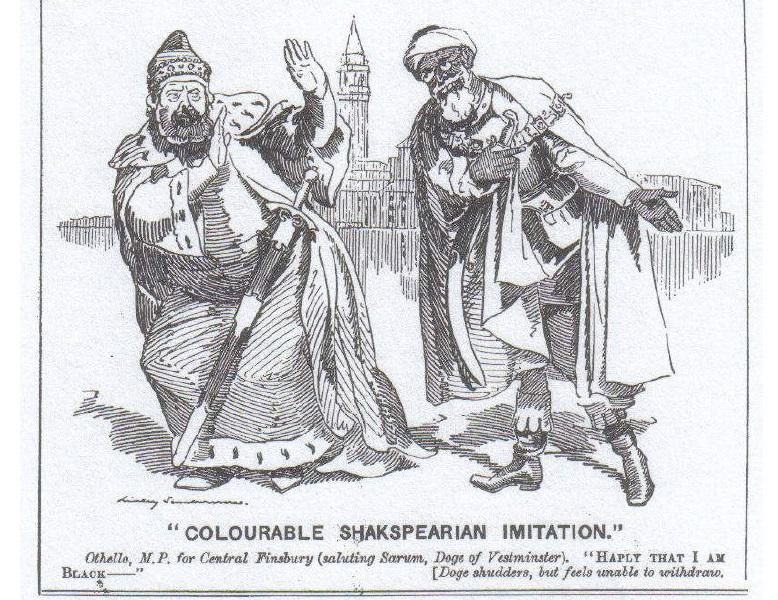 Punch, or the London Charivari was a popular British weekly magazine established in 1841, which produced humorous cartoons reflecting current affairs.

Dadabhai Naoroji was the first MP of Indian ethnicity to be elected to Parliament. The cartoon of him as Othello, above, refers to Lord Salisbury’s remarks in 1888 that England was not ready to elect a ‘Blackman’ to government after Naoroji's first failed campaign. The success of Naoroji’s election in 1892 went on to prove that this was not the case. The cartoon makes light of this.

The cartoon refers to Shakespeare’s Othello (Act 3, Scene 3) ‘Haply, for I am black’. These are lines given to Othello, when he is talking to Iago and trying not to believe that Desdemona has been unfaithful to him. Othello was one of the most famous ‘black’ men in English literature.

In the nineteenth and early twentieth century, ‘black’ was often used to describe people from Asia as well as people of African descent (unlike today where the term is more regularly used to describe people of African descent only). However, Naoroji did have fair skin and many commentators at the time were keen to point this out.

Dadabhai Naoroji, of Bombay Parsi origin, was the first Indian to be elected to Parliament in Britain. Naoroji travelled to Britain in 1885 as a business partner of Cama and Company. A member of several businesses, he became Professor of Gujarati at University College, London (1856–65). He was one of the founders of the Indian National Congress in Bombay in 1885, which was the main nationalist party that campaigned for Indian independence from British rule. He was known as the ‘Grand Old Man of India’.

Britain and India had strong business links in the nineteenth century so Naoroji was not the only Indian businessman to travel to Britain. As India was part of the British Empire, there were strong trading links between the two countries and a steady flow of ships that would take British people to India and Indian people to Britain. Many of the sailors who worked on these ships, known as lascars, settled in Britain (see: 'The lascars'). University students and political petitioners would also travel from the Indian subcontinent to Britain. It is very difficult to be certain about the number of men and women from the Indian subcontinent who lived in Britain at the end of the nineteenth century; estimates suggest there were up to 15,000 by 1947.

In 1886, Naoroji campaigned as Liberal Party candidate for the strongly Conservative seat of Holborn in London, but was unsuccessful. In 1888, referring to Naoroji's defeat, the Conservative Party Prime Minister, Lord Salisbury, remarked that an English constituency was not ready to elect a 'Blackman'. This statement gave Naoroji more notoriety and was referred to in the above Punch cartoon. In 1892, Naoroji stood as Liberal Party candidate for the constituency of Central Finsbury in London. He was successfully elected with a majority of five, joining Gladstone’s government. He lost his seat in the General Election of 1895, when the Conservatives won back power.

As an MP Naoroji supported votes for women, pensions for the elderly, Irish Home Rule and the abolition of the House of Lords. Although he was elected by British men, Naoroji claimed to represent millions of Indians who had no democratic government of their own, and were ruled by the British parliament.

In 1906, Naoroji stood as a candidate for Lambeth North but was again unsuccessful. In 1907, Naoroji left England to retire in Bombay, where he died in 1917.

In 1895, another Indian man was elected to Parliament. He was Mancherjee Merwanjee Bhownaggree, also born in Bombay, and he was elected as Conservative MP for the London constituency of North-East Bethnal Green. One of the issues he campaigned on was anti-immigration (see flyer). Bhownaggree was successfully elected for a second time in the 1900 General Election, but was defeated in the 1906 General Election. 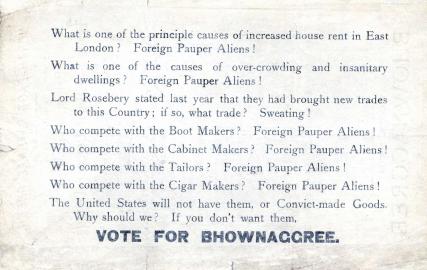 The first non-white MP in Britain was probably David Ochterlony Dyce Sombre, who was of mixed European and Indian descent. In 1841 he was elected as a Radical-Liberal to the seat of Sudbury, in Suffolk. In 1842, however, Parliament overturned the result citing 'gross, systematic, and extensive bribery' during the campaign, and he and the other Member for the Sudbury division, Frederick Villiers, lost their seats. It is possible that John Stewart, elected as MP for Lymington in 1832, was also from a mixed ethnic background.

After Naoroji and Bhownaggree, the next MP of migrant origin was Shapurji Saklatvala. Also born in Bombay (and of Parsi origin), Saklatvala won the seat of Battersea North in 1922 as Labour candidate, and was defeated in December 1923. He regained the seat in October 1924, when he stood as a Communist representative and held the seat until 1929. No other non-white MPs elected in Britain until 1987 when four MPs, Diane Abbott, Paul Boateng, Bernie Grant and Keith Vaz, were all elected for the Labour Party.

Art in Parliament – on a portrait of Naoroji

Sumita Mukherjee (2004), ‘Narrow-majority’ and ‘Bow-and-agree’: Public Attitudes Towards the Elections of the First Asian MPs in Britain, Dadabhai Naoroji and Mancherjee Merwanjee Bhownaggree, 1885-1906’, Journal of the Oxford University History Society

The election of Naoroji shows us that migrants were able to make significant political impact on British life as elected representatives. Naoroji was not only representing Indian people but was also representing the local needs of his constituency.