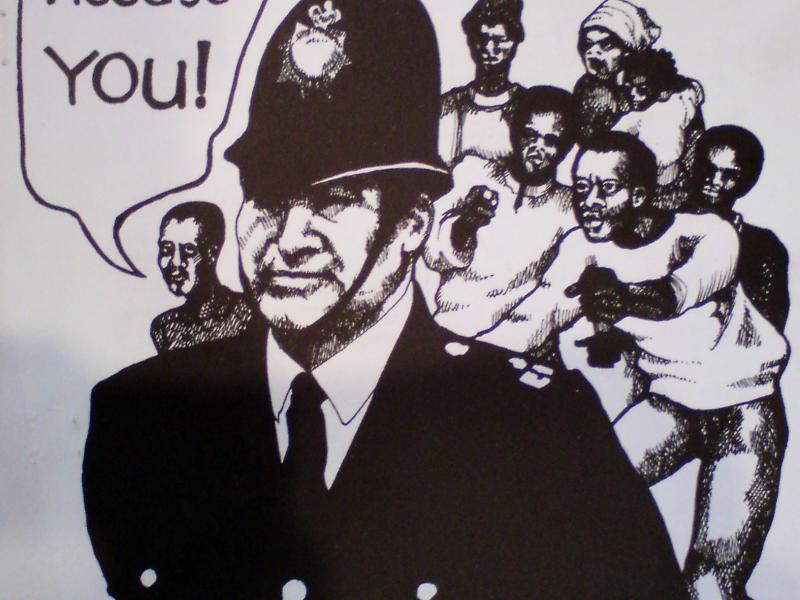 Black Dimension was published in 1969 at a time when many young black and Asian migrants were becoming involved in Britain’s Black Power movement. The magazine was edited by Darcus Howe, who became a well-known campaigner for black rights in the 1970s and 1980s.

Black Dimension is useful to historians for understanding how young black radicals saw life in London. It contains first-hand accounts of police violence and  analysis of the reasons for racism in Britain. Additionally, it is useful for showing the steps taken by young migrants to challenge prejudice and to campaign for equal rights.

Black Dimension was one of many magazines published by the British Black Power movement, and young migrants more generally, in the late 1960s and early 1970s. In addition, Black Power Speaks, and The Freedom News were published by the Black Panther movement (see below). Hustler! was published by young black journalists and was designed to represent all strands of opinion across the whole Caribbean community in west London. It was supported by Frank Crichlow, a migrant from Trinidad and the owner of the Mangrove Restaurant in Notting Hill, which became the unofficial centre of the Caribbean community in London (see below for more on the Mangrove restaurant).

The Black Power movement in Britain

The British Black Power movement emerged in London in the summer of 1967. The black American radical Stokely Carmichael spoke at a gathering in Camden, inspiring black people living in Britain to organise against prejudice and ‘white power’ – the privileged status of white people. By 1968 there were a variety of different radical Black Power groups in Britain. Some wanted to use guerilla tactics to overthrow the British state, others wanted to form a mass movement and use direct action to bring about change. All radicals associated with black power believed that black people had a right to defend themselves and their communities, using force if necessary, and that they should challenge widespread assumptions about the inferiority of black people.

Darcus Howe and The Black Eagles

Darcus Howe travelled to Britain from Trinidad in 1961, believing he would be welcomed by British people as a fellow member of the British Empire. However, Britain was not what Howe expected. The country was poorer than he thought, and there was more prejudice than the propaganda about the Empire he had heard in Trinidad had led him to believe. Although he was well educated and well qualified, Howe was refused work in well-paid professional jobs. He was also subjected to racist abuse by white men who resented the fact that he had a white girlfriend. Initially, Howe lived in Notting Hill, where there was a large Caribbean community (see: 'Murder in Notting Hill'), and during the 1960s he began to work as a journalist for Hustler!, a paper published by and for the Caribbean people resident in the area. 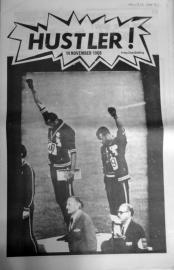 Darcus Howe became involved in the Black Power movement for a number of reasons. In the late-1960s he was influenced by a number of black intellectuals including Caribbean writers and activists C. L. R. James and Walter Rodney, and American activists such as Martin Luther King, Malcolm X and Stokely Carmichael whom Howe met in London. The inspiration they offered, coupled with Howe's own experience of discrimination in housing, the job market and particularly in policing, led him to found The Black Eagles, and later join the British Black Panther movement in order to campaign for the rights of migrants.

Black Dimension magazine (see main source above), published in 1969 and edited by Darcus Howe, set out the demands of The Black Eagles. These included the demand for decent housing for all migrants, the release of political prisoners, and the demand that black people who were accused of crimes should be tried by a jury made up exclusively of black people.

Black Dimension is useful as a historical source as it helps us to understand the causes and consequences of migration and to understand change over time. Articles in Black Dimension discuss the aspirations of recent migrants to Britain, as well as the reality that these migrants faced when they arrived. First-generation migrants who were involved in the Black Power movement tended to believe that Britain was a benevolent mother country that would welcome their arrival. They also tended to assume that they would be treated with dignity and respect by their fellow subjects of the British Empire. In reality, migrants experienced various forms of discrimination that caused widespread disillusionment.

Broadly speaking, the first migrants who arrived in Britain from the Caribbean and Asia in the late 1940s and early 1950s tended to accept the discrimination they experienced as a fact of life. By the late 1960s that had changed. More recent migrants as well as black people born in Britain challenged discrimination in a more overt way than those who had migrated in the previous decade. By the late 1960s some young new arrivals, and many young black Britons, responded by organising themselves to demand equal rights. This change was brought about by a variety of factors.

First, young black people in Britain were inspired by the example of radicals in Africa, the US and Asia, who were fighting for civil rights against colonialism and racism. Black Dimension shows that British black radicals saw the struggle against white domination in Britain as part of an international movement. Black Dimension published articles on campaigns run by black students in Canada and the US, as well as struggles to end the rule of the British and French empires in the developing world. These articles often reflected the experience of the writers. Darcus Howe, for example, had collaborated with black radicals in the US and Canada in the late 1960s.

Secondly, British racism had become more forceful by the 1960s. Conservative MP Enoch Powell encouraged white British people to blame migrants for the economic and social problems the country was experiencing and grew very influential in the late 1960s and early 1970s. While Powell was not part of the Government of the 1970s, Ministers still passed laws that reflected his agenda. His speeches against immigration were one factor behind the 1971 Immigration Act, a law that allowed the government to stop black and Asian people entering Britain, whilst allowing white people from Australia, New Zealand and Canada to enter Britain freely (see: 'Families divided'). The 1971 Act also gave the government the power to repatriate some recent migrants. Again, this shows the influence of Powell, who argued that repatriation should become government policy. Powell also caused widespread fear by claiming that black and white people could not live together in peace, and therefore that migration would lead to violence. Young migrants responded to ‘Powellism’ by organising campaigns against racism.

The largest and most influential black power group in Britain were the Black Panthers. The British Panthers were founded in the summer of 1968 by the Nigerian playwright Obi B. Egbuna. However, Egbuna was soon arrested and charged with conspiracy to murder police officers, because of an essay that he wrote encouraging black people to resist police violence collectively. Following Egbuna’s conviction in December 1968, Althea Jones Lecointe took over the leadership of the movement.  Jones Lecointe was a migrant from Trinidad, who had moved to London to study Biochemistry at the University of London. Under Jones Lecointe the Panthers became a highly effective community organisation that produced a newspaper, Freedom News; led campaigns against police brutality and discrimination in employment, housing and education; and ran sessions to encourage black people to study books by radical authors. 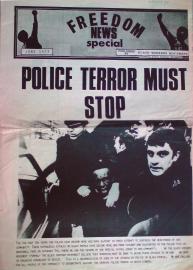 Freedom News magazine cover, June 1973 (Courtesy of The George Padmore Institute)
By the early 1970s they had as many as 3,000 members mostly based in Notting Hill and Brixton. The Panthers had a large Caribbean membership, and also had African members and others who had come to Britain from the Indian subcontinent.

Black Panthers and the Mangrove trial

The Black Panthers' most influential campaign was the campaign in defence of the Mangrove Restaurant, a Caribbean restaurant in Notting Hill. The Mangrove restaurant was established by Frank Crichlow in the late 1960s. Crichlow was a migrant from Trinidad who arrived in Britain in the 1950s. His restaurant became famous for its food and as a centre of Caribbean culture in Britain. Crichlow also supported Hustler magazine and saw his  restaurant fall subject to continual, repeated police raids. The police claimed to be searching for drugs but none were ever found. Because of the apparently bogus drugs claims, the black radicals in Notting Hill believed that the police were targeting the Mangrove restaurant because Crichlow was a successful black businessman, with a white partner, and white police officers resented his success. Additionally, the Mangrove became a centre where black people could organise to stand up to police racism. Finally, as discussed in Cox, Shirley and Short's The Fall of Scotland Yard (1977), the Notting Hill police recycled illegal drugs – essentially, they would sell drugs that they had seized at ‘police prices’ on the streets of Notting Hill. Crichlow refused to allow police drugs to be sold in his restaurant.

The day-to-day experiences of Darcus Howe and others within the Caribbean and Asian communities in Britain at this time frequently featured exclusion and threat from the police and others. Although many people were able to make their way in society, success came in the face of this, a desire for equal treatment led to a desire to organise and resist repression. Through magazines, rallies, connections with the wider African and Asian diaspora, as well as protests, the men and women in these communities stood up for their rights and, after a long struggle, saw the widespread nature of discrimination in Britain start to shrink.

Barry Cox, John Shirley, Martin Short (1977), The Fall of Scotland Yard – on the illegal activities of some members of the Metropolitan Police in the 1960s and 1970s

Vivienne Sanders, Peter Clements, Nick Shepley, and Robin Bunce (2015), History+ for Edexcel A Level: Democracies in Change: Britain and the USA in the Twentieth Century – provides a good narrative overview of migration in Britain in the period 1918 to 1979, which situates the rise of the Black Power movement in its broader context

Satnam Virdee (2014), Racism, Class and the Racialized Outsider –offers a more detailed account of the recent politics, sociology and history of migration

The George Padmore Institute has many resources on Britain's black community, including the Black Power movement.

The National Archives - 'Rights, resistance and racism: the story of the Mangrove Nine'

The short film Mangrove Nine is a documentary about the Black Power movement’s most significant campaign of the early 1970s.

The history of the Black Power movement in Britain offers students the opportunity to draw contrasts and comparisons with other campaigns for justice and equality: