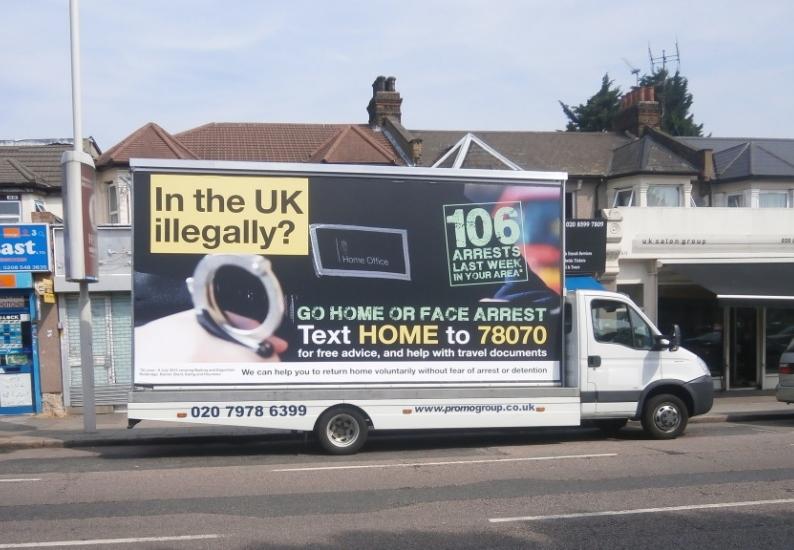 In July 2013, the Home Office (the government department responsible for immigration control in the UK), arranged for a vehicle to drive around neighbourhoods in London displaying a billboard with the text: ‘In the UK illegally? GO HOME OR FACE ARREST. Text HOME to 78070 for free advice, and help with travel documents’.

In the top right of the image the advert stated ‘106 ARRESTS LAST WEEK IN YOUR AREA’. These messages were printed over an extreme close-up image of uniformed hands holding a pair of handcuffs.

The 2013 ‘Go Home’ van advertising campaign (pictured above) took place in a period of increasing political and public attention to ‘illegal immigrants’ in Britain. The term ‘illegal immigrant’ is not straightforward; it implies that the person to whom it refers has broken the law, and suggests that they did so in the way they entered the country. However, there are many ways in which someone's immigration status can become unlawful.

From legal to irregular: what makes a person's immigration status unlawful?

A person's immigration status can become unlawful if:

1) Someone may have entered the country with a visa that allowed them to stay for a limited amount of time, and then stayed longer than this (known as ‘visa overstayers’).

2) A person may have a visa that allowed them to stay in the country under certain conditions, but those conditions subsequently changed. For example, someone may be given a spousal visa to enter the country to marry a UK citizen. If the relationship then disintegrates, they may no longer have the right to stay in the country. This may be the case even if the couple have children, or if the relationship breaks down as a result of domestic abuse.

3) A person may enter the country to seek asylum in order to be recognised as a refugee, on grounds that they would be persecuted in their country of citizenship. It cannot be illegal to ask to be considered for refugee status under the 1951 Refugee Convention and the 1948 Universal Declaration of Human Rights. However, if the receiving country rejects a person’s claim for asylum (for example because they do not believe the person would be persecuted in their country of citizenship), and if the person has exhausted all grounds for appeal, they may then have no legal basis on which to remain in the country.

4) The law may have changed since a person arrived, so that their residency status has changed without any change in their own situation, or they may not be able to find the documents that are now required to prove their rights to remain. Immigration legislation in the UK has changed often in the early twenty-first century: between 2000 and 2016, there were seven changes to primary legislation on immigration and naturalisation in the UK; and further changes to regulations, procedures, enforcement and measurement of immigration which did not require primary legislation.

Because of such variations in situations and intentions, many experts in this area prefer to use terms such as ‘irregular migrant’ rather than ‘illegal immigrant’ to refer to people whose legal rights to remain in the country are unclear.

We do not have reliable estimates for the numbers or countries of origin of visa overstayers or other categories of irregular migrants in the UK. In Australia, which does keep figures on visa overstayers, 'British' was the fourth largest nationality of overstayers in 2013 (3,780 people)

The Home Office stated that the 'Go Home' van advertising, part of a broader communications campaign they called ‘Operation Vaken’, was intended to encourage people who did not have the correct legal permissions to be in the UK, to return to the country from which they had arrived. The Home Office said this would avoid their usual practice of finding, arresting and removing such people from the country by force. Instead, it would allow people to arrange their travel with dignity – and also save money for the taxpayer, who would otherwise incur the costs of their arrest. According to the Home Office’s own evaluation of Operation Vaken, 11 people left the country as a result of seeing the 'Go Home' advertising van, and seven as a result of hearing about the van through news reports or internet commentary. 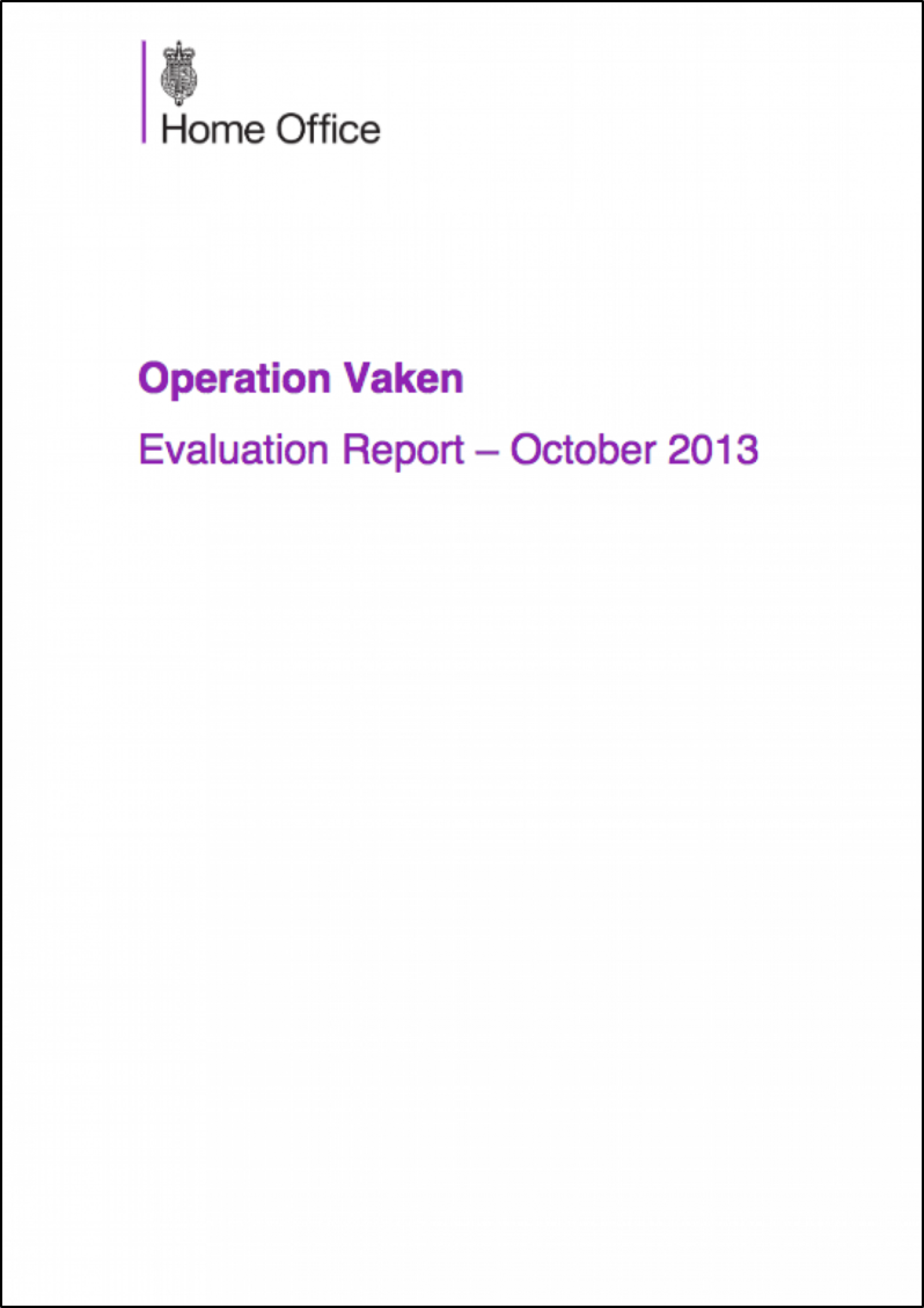 The image of the 'Go Home' van (above) is taken from news coverage of the campaign. One reason the advertising received a lot of media attention is that the phrase it uses – ‘Go Home’ – was notorious as a slogan of far-right racist organisations, such as the National Front, that were particularly active in Britain in the 1970s. The phrase was directed at people who appeared not to be white and British, many of whom had settled in Britain as subjects of the British Empire, or lived in the UK since birth; it implied that those groups could never be considered ‘at home’ in the UK. This kind of racialised abuse had since become less acceptable in public life; as described in a 28 July 2013 article in the Guardian newspaper, many people found the use of this phrase in official government advertising disturbing as it seemed to go beyond speaking to people who were ‘in the UK illegally’, and to draw on those memories of public racism.

In 2007, Labour Home Secretary John Reid tried to demonstrate a tough stance on tracking down people breaking immigration law, by accompanying enforcement officers on dawn raids to arrest people, and asking journalists to report this. Operation Vaken in 2013 can be seen as part of a similar pattern of actions by successive governments intended to draw the general public’s attention to the tough actions being taken to prevent ‘illegal immigration’.

Despite the different situations that can result in irregular migration status, in political speeches, media coverage, and everyday talk, people often associate the idea of ‘illegal immigration’ with asylum seeking (or people who have been refused asylum). Asylum seekers are people who ask for protection from a state other than the country of their citizenship, on the grounds that in their country they would face persecution because of their race, religion, nationality, membership of a particular social group, or political opinion. Such persecution could include imprisonment, torture, death, displacement, violence, or other forms of discrimination. Large proportions of people seeking asylum in the UK in the early twenty-first century come from countries that were formerly colonies of the British Empire (e.g. Pakistan, Somalia, Sri Lanka, Zimbabwe); countries in which British armed forces are involved in contemporary warfare (e.g. Afghanistan, Iraq, Syria) and/or countries to which British companies sell weapons (e.g. Pakistan, Somalia, Sri Lanka).

The numbers of people seeking asylum in the UK rose significantly between the 1990s and the early 2000s, but the proportion of net migration accounted for by asylum seekers in the same period actually fell. Throughout this period, Press and politicians often referred to ‘bogus’ asylum seekers, associating people seeking refuge with illegality; in 2003, a Press Complaints Commission guidance note was issued requiring news media to use more accurate language.

The largest national groups of people seeking asylum in the UK in 2013, the year of the 'Go Home' van campaign, were from Iran, Pakistan, Sri Lanka and Syria. People have left those countries to escape human rights abuses such as torture, persecution for their religious faith, their sexuality and their political beliefs, and to get away from international and civil wars. In 2013, there were 23,584 applications for asylum in the UK. This represented 8% of the net migration (i.e. the number of people entering minus the number of people leaving) to the UK that year, and 0.04% of the UK population as a whole. 62% (14,622) of asylum applications in 2013 were refused, though many people appeal the first decision and some of these are granted asylum or leave to remain on appeal.

The attention that the 'Go Home' vans attracted also led to creative forms of resistance, including street protests (some of which were filmed and circulated online), disruption of Home Office enforcement raids, Twitter campaigns, and attempts to disrupt the helpline the 'Go Home' campaign advertised. As described in the Operation Vaken Evaluation Report, two-thirds of the calls to the number were classified as ‘hoax’ calls. Many of these campaigns of resistance used social media instead of, or in combination with, traditional forms of activist politics.

Similarly, many more people were aware of the van through news reporting, both traditional and online, than had seen it in real life.

You can find regularly updated and reliable statistics and analysis of migration trends on the Migration Observatory website.

Mapping Immigration Controversy is a website dedicated to a research project that mapped responses to the 'Go Home' van and other government immigration campaigns. It includes short blog posts and links to other reading including the final research report, and a short video summarising the research.

Southall Black Sisters is an organisation that has campaigned on the rights of migrant women since the 1990s. In particular they support women who have entered the UK on a spousal visa but whose residency has become unauthorised after they left their husband, for example after they had to choose between remaining in an abusive relationship, or breaking their visa conditions. An archive of their campaigns and related issues can be found on their website.

Some people might challenge the idea that events as recent as 2013 should be considered ‘history’ in the same way as other events captured on this site. They might argue that the 'Go Home' van and other happenings of the recent past are too close to us for us to view them as objectively as we might view information about medieval Britons, or even information about Britons of the early twentieth century. With that in mind, consider the following questions: