Jewish immigration and the Aliens Act

'A Voice from the Aliens', 1895 (Courtesy of The Modern Records Centre)
Show source description

This pamphlet, written by Jewish trade unionists in 1895, attempts to counter the stories about Jewish ‘aliens’ in Britain that were popular at the time. It argues that there are wide structural reasons for poverty and unemployment in Britain and that immigrants are not to blame.

(Source information: the pamphlet can be found in the papers of William Wess - trade unionist, socialist and Jewish activist - at The Modern Records Centre, University of Warwick, ref: MSS.240/W/4/2/9. A scanned copy of the full document can be found here)

‘Savage state-sanctioned anti-Jewish riots aka pogroms, along with poverty made worse by widespread economic and political discrimination, caused over 2.5 million of the 6 million Jewish people living in Eastern European to flee their homes between 1870 and 1914. Most went to Western Europe and America but between 120,000 and 150,000 arrived in Britain. In response, Britain passed a law restricting immigration known as the 1905 Aliens Act.

Most of the Eastern European arrivals were very poor and less westernised than earlier Jewish immigrants to Britain, though there were a few wealthy individuals among them. The Jewish people already living in Britain in 1870 were nervous that their own hard-won status might be put at risk by an influx of impoverished and more ‘alien’ Jews. These new immigrants had suffered a hostile environment not only in Russia and Poland, but in Austria-Hungary and Romania. In Russia, most Jewish people had been restricted by the state to a ‘Pale of Settlement’ where they had lived in small villages or ‘shtetls’. Typically these Jews of the Pale were pedlars, carters and/or based in small workshops where they worked as tailors, shoemakers and metal workers. Some also were employed in textile and tobacco factories. A minority in certain regions worked in agriculture but few were peasants in the traditional sense. Within the Pale, economic opportunities were limited, and they worsened as the population increased. Restrictions on what schooling and occupations Jewish people could follow and where they could live were progressively tightened and peaked with the expulsion of the Jews of Moscow in 1891–1892. In Britain this new wave of immigration was met with increasing unease.

Beyond the Pale: Britain's doors close 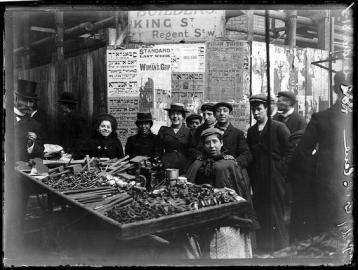 'Petty Coat Lane Londres' by Charles Chusseau-Flaviens, ca. 1900-1919. The photo is of Jewish people on Petticoat Lane, London, and shows Yiddish being used (Courtesy of George Eastman Museum, gift of Kodak Pathé)
The image of England as a liberal safe haven for persecuted people can be traced back at least to the time of the English Civil War when Protestant radicals such as the Levellers stressed the individual rights of ‘freeborn Englishmen’ against the powers of the state. We can also see support for the idea of England as a haven for foreigners in the Whigs’ support of their fellow Protestants, the Huguenots, from the 1680s. It was echoed too in their initial and more commercially motivated welcome to foreign-born Jews in the Jewish Naturalization Act of 1753. However, more traditionally nationalist elements in elite circles were not so kindly disposed and played on grassroots anxieties to end a welcome to foreigners. (see: ‘Blood libels, castration and Christian fears’). The flight of Jewish people from Eastern Europe from the 1870s further tested British willingness to make space for refugees and economic migrants. Anxieties about ‘diluting’ the strength of the English population intensified as internal class tensions and rivalry with other European powers for imperial dominance increased in this period. Since it was noted that poor people in Britain - be they ‘indigenous’ or ‘alien’ - were outbreeding and thus increasingly outnumbering the English middle classes, there were calls for more punitive policies against the poor and the foreigner. A nationalist backlash took hold, some of which was shored up by Social Darwinist ideas.

In the end, the Aliens Act of 1905 marked the conclusion of an open-door period in British history. Also, although foreign migrants were referred to as ‘aliens’ rather than as ‘Jews’ in the legislation, anti-Semitic prejudice was widespread in the debates of the time. Poor Jewish people were said to bring crime, bad labour conditions, anarchism, dirt and disease into the country. We see some of these concerns expressed in the extract below from an 1893 House of Commons debate, where the Conservative MP for Thanet, Mr. James Lowther, shares his worries about the growth of the ‘Jewish race’ and the fact that the country is being ‘overrun’ by ‘destitute foreign immigrants’. Lowther’s speech sets the ‘Anglo-Saxon race’ against newcomers and is filled with fears about foreign labour and the hygiene of ‘aliens’. 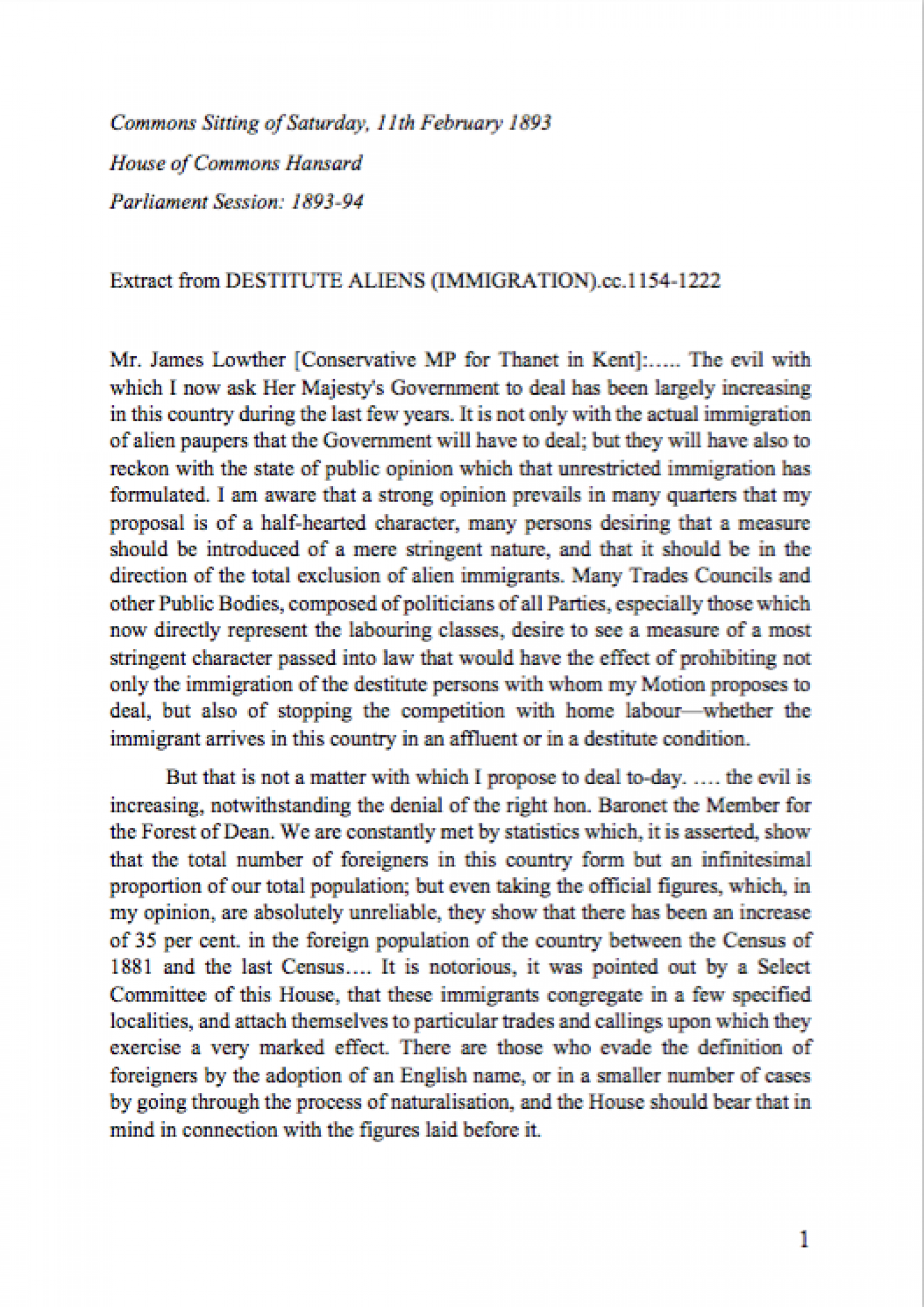 Panikos Panayi (2010), An Immigration History of Britain: Multicultural Racism since 1800

Written by Dr. Madge Dresser, Associate Professor of History, University of the West of England