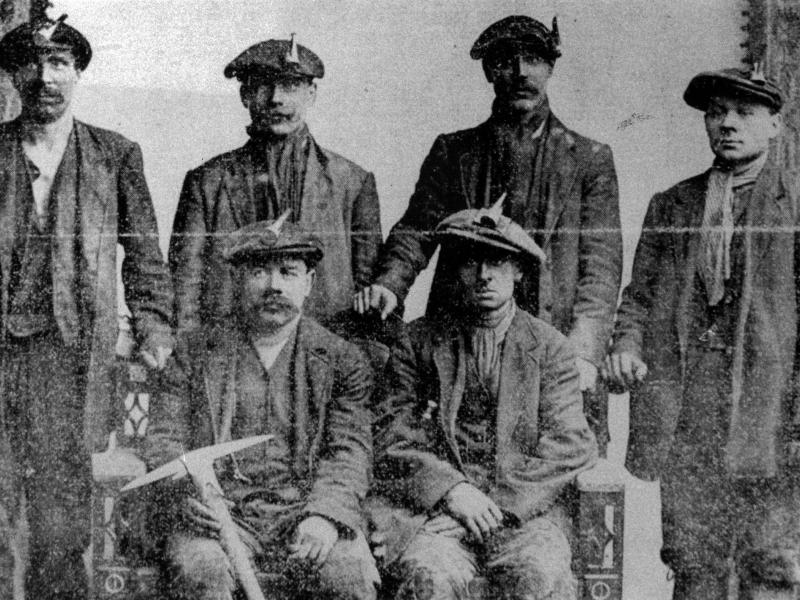 The photograph captures a group of Lithuanian miners wearing their work clothes.

It comes from a collection at SCRAN (Scottish Cultural Resources Access Network), which includes photographs of Lithuanian miners, businesses, newspapers, and social events.

One in four Lithuanians – about 650,000 individuals – emigrated from their homeland between 1870 and the First World War. Most went to the United States, but a significant number settled in Scotland’s industrial central belt, particularly around Coatbridge and Bellshill in Lanarkshire, and Newtongrange in Midlothian. By 1914 there were about 12,000 Lithuanians in Britain, 7,000 of them in Scotland. Most were farm workers who had been pushed out of Lithuania by ‘Russification’ policies and a deteriorating economy. Following the failure of the Polish-Lithuanian uprising against the Russian Empire in 1863, Russia reacted by implementing so-called ‘Russification’ policies. These were processes of cultural and political assimilation. Public use of the Lithuanian language was forbidden, there was anti-Catholic discrimination by the Orthodox Church, and some areas of Lithuania were repopulated by ethnic Russians.

Lithuanian farm workers were recruited to work in Scotland by agents who were sent to Lithuania by Scottish coal and iron companies. While the Lithuanian influx was much smaller, less well-known and more short-lived than the movement from Ireland, it was equally controversial, not least because of opposition within the mining communities which provided employment to both groups of immigrants. The key distinguishing features of the Lithuanian immigration were the persistent public misunderstandings about the nationality of the immigrants, and the almost total disappearance of the community after the First World War.

Lithuanians were only one element in a wider movement of migrants to Scotland. By far the biggest influx was from Ireland. Irish harvesters had traditionally worked seasonally in south-west Scotland, but their numbers increased significantly in the late eighteenth century, as poverty pushed and opportunity pulled them, particularly to jobs in handloom weaving in and around Glasgow (see: 'The Irish'). Very cheap steamship passages from northern Irish ports to Glasgow after 1800 increased the flow still further and by 1851 – during the Famine crisis - nearly seven per cent of Scotland’s population was Irish-born. Women worked in the cotton and jute mills, and men as miners and general labourers. The Irish continued to dominate immigration to Scotland in the second half of the nineteenth century and for most of the twentieth century. They had a consistently bad press because their extreme poverty put an extra burden on the Scottish poor law, their Catholicism was perceived as a threat to Scotland’s dominant Presbyterianism, and their willingness to accept pittance wages and break strikes led to accusations that they were stealing jobs and inhibiting the development of trade unionism. (Scotland’s dominant Presbyterian culture and identity made it difficult for immigrants with a different faith to integrate and assimilate. The hostility experienced by Lithuanian Catholics was similar to that encountered by their Irish co-religionists, but with the extra stigma that the Lithuanians were non-English-speaking foreigners).

Italian immigrants first became established in the eighteenth century, especially in Edinburgh where the culture of the Enlightenment created a demand for Italian music, painting and interior decorating (see: 'Italian immigration to Britain'. In the nineteenth century they began to appear as wandering street musicians and stall holders. Permanent settlement began to take place towards the end of the nineteenth century, when many Italians were recruited as contract labourers by padroni, or recruitment agents, who sought them out in Italy. In the twentieth century – by which time there were about 5,500 Italians in Scotland – they became particularly associated with ice-cream parlours, and also shifted from street vending to restaurant owning. Unlike the Irish and Lithuanians, they were largely self-employed. While they were not discriminated against like the Lithuanians and Irish, probably because they were not competing for jobs, there was some opposition because they opened their shops on Sundays. After Mussolini’s declaration of war in June 1940, there was a spate of attacks on Italian premises and some individuals were interned (see: 'Building Italian communities')

By the late twentieth century, Asians constituted the highest proportion of non-European ethnic communities in Scotland, but they had also been present in smaller numbers in the nineteenth century, not least as medical students. Travelling pedlars criss-crossed the country in the early twentieth century, and later moved into permanent retail businesses. By the mid-1990s there were 50,000 people of Asian origin in Scotland, about one per cent of the population. That was a very low figure compared with most Western societies.

Local newspapers are a rich, multi-textured repository of information about social, economic, cultural and political issues. The Dalkeith Advertiser was a weekly newspaper, published in an area that was one of the centres of the Scottish mining industry and a location where many Lithuanians settled. The article featured below is an extract from a report delivered at the annual conference of the Scottish Miners’ Federation, which had just been held in nearby Edinburgh.  The extract reflects in particular the misunderstanding of Lithuanian immigrants’ place of origin, the nature of their employment, the hostility they experienced, and the division of opinion about the grounds on which they were opposed by Scottish miners. 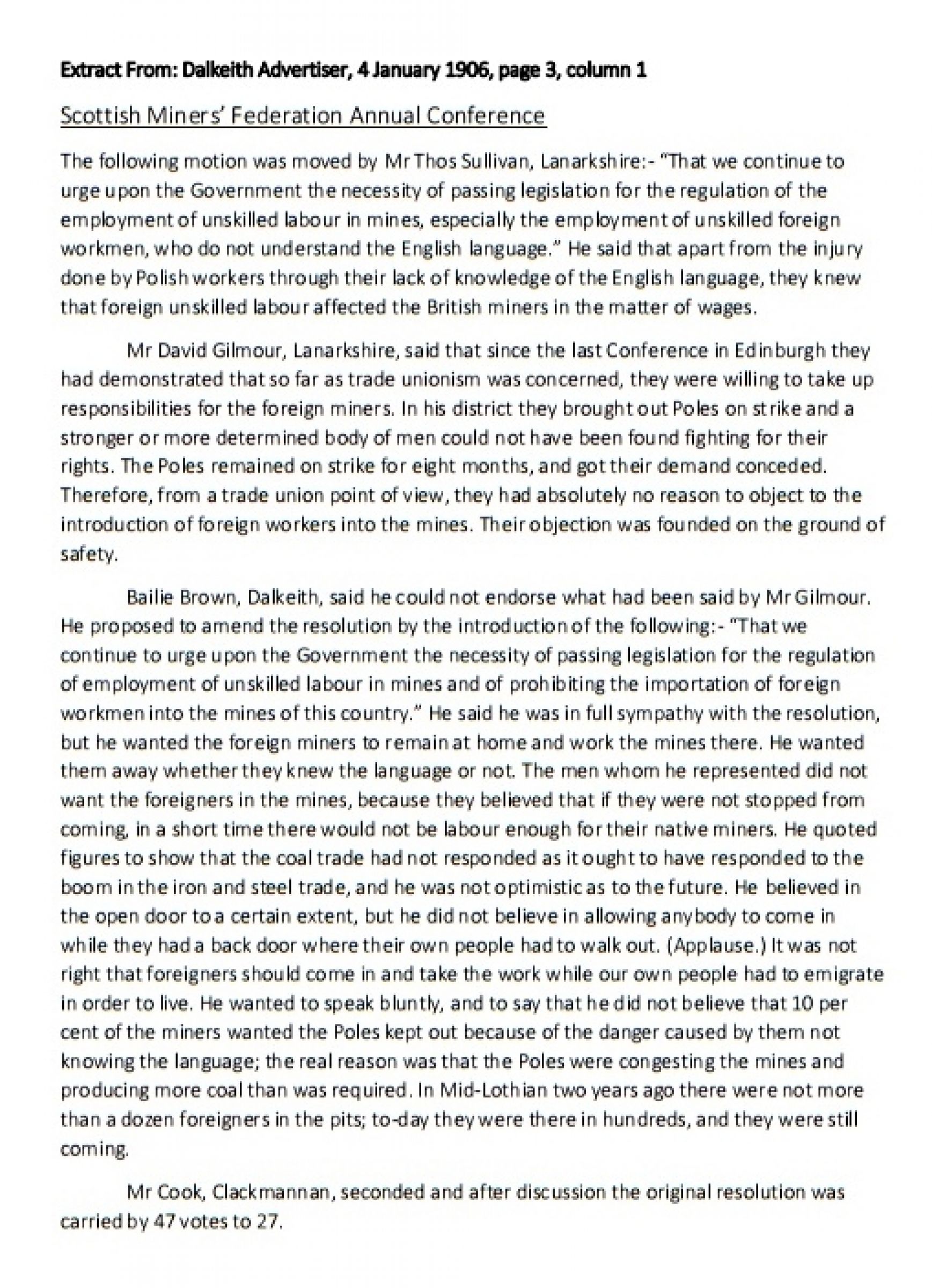 The immigrants the article is referring to had come to Scotland from Lithuania, not Poland. Around 1900 the Midlothian mining industry was centred around Dalkeith and Newtongrange. The Lothian Coal Company, which shipped much of its output to the Baltic, had also sent agents to Lithuania to recruit workers for their pits. Since the 1860s Russification policies in the Baltic States and East Prussia had been driving Lithuanians overseas, mainly to the United States. Some were escaping conscription into the Russian army, while others were economic migrants, and their movement was therefore shaped by the familiar combination of ‘push’ and ‘pull’ influences. Many recruits thought that they were going to the USA or Canada, and some were indeed ‘stage migrants’, who moved on to America when they had saved enough money. Stage migration is where individuals, families or communities did not migrate in a single, straightforward linear movement, but were rolling stones who continued to relocate, either within their new country, or on to another country.

The experience of Lithuanian miners was beset by misunderstandings. As well as being incorrectly labelled as ‘Poles’ or ‘Russian Poles’ and believing they had landed in America rather than Scotland, many had come from an agricultural labouring background, and thought they were being recruited for the same employment overseas. This was because when they disembarked at Leith, the coal company agents who met them were unable to communicate because of the language barrier. When they gestured with a digging motion, the Lithuanians thought they were being recruited as farm workers, not coal miners.

The attitude of host communities and fellow workers was not only one of misunderstanding, it was also often one of hostility. This is clearly demonstrated in the extract above. In particular, Lithuanians faced the hostility of the Scottish Miners’ Federation on the grounds that they undercut wages, diluted the labour market, broke strikes and caused accidents because the language barrier prevented them from understanding instructions. As the extract demonstrates, however, not all union delegates condemned the ‘Poles’ as strike breakers, and in due course the Lithuanians were accepted into the Lanarkshire Miners’ Union.

The hostility evident in the extract was echoed elsewhere, not least by politicians of different political colours. John Wilson, a Unionist, said in 1900 that he did not believe ‘it proper that this country should be the dumping ground for all the paupers of Europe’. Keir Hardie, later leader of the Labour Party, as leader of the Ayrshire miners led a campaign against them, and the Glasgow Trades Council branded them as ‘evil’, echoing the Miners’ Federation’s demand for immigration controls to keep them out. Like many Irish immigrants to Scotland, the Lithuanians also faced hostility from the religious establishment. Most of them were Catholics who found it impossible to gain acceptance into mining communities which had long been torn apart by sectarianism and into a country where aggressive Protestantism was at that time one of the hallmarks of national identity. As a result they developed their own support structure of clergy, newspapers, shops, and businesses.

Not all encounters between Scots and Lithuanians were hostile, but – inevitably – harmonious encounters did not make news. The Lithuanians seem to have been tolerated rather than welcomed, and the late nineteenth-/early twentieth-century migration did not persist long enough for a significant community to become embedded in Scottish society.

The legacy of Lithuanians in Scotland

The Lithuanians’ impact in terms of the controversy they aroused is clearly evident in the newspaper extract, but perhaps their main legacy was a negative one, in that they are scarcely remembered in modern Scotland. During World War I there was considerable hostility directed at them as aliens. Some of the men were liable for service in the Russian army, and when they were stranded in Russia after the Revolution, their dependent families back in Scotland found themselves facing eviction in their hundreds from company-owned housing – and subsequently the withdrawal of their poor relief. Many women and children therefore found themselves with no choice but to return to Lithuania, and 400 of them were repatriated in 1920. Their return – and the virtual disintegration of the Lithuanian community – helps to explain their invisibility, but it was worsened by a deliberate amnesia, for the immigrants’ descendants did not want to preserve ethnic memories because of the double stigma of being foreigners and miners in a country which did not hold either category in high regard.

Those who stayed in Scotland found it difficult to maintain a sense of community. About 400 of the 6,000 Lithuanians who came to Britain as Displaced Persons (‘DPs’) after the Second World War settled in Scotland and established links with their countrymen who had emigrated there half a century earlier. They went to the same districts where previous generations had settled – the Lanarkshire coal and steel communities of Bellshill, Mossend and Carfin – but some went further afield, to the aluminium works at Kinlochleven in the Highlands.

Marjory Harper and Stephen Constantine (2010), Migration and Empire, Chapter 7, 'Immigration and the Heart of Empire'

John Millar (1998), The Lithuanians in Scotland: A Personal View

A study of the Lithuanians in Scotland will allow students to evaluate:

Causes of the movement: economic and political push, and the pull of recruitment agents’ promises.

Consequences: employment in coal mines instead of – as many of them had expected – in agriculture, coupled with the hostility of fellow-workers and Scottish communities to their Catholicism, linguistic distinctiveness and alleged strike-breaking.

Changes: the shift from trade union hostility to gradual acceptance.

Continuity: the re-emergence of a Lithuanian community in twenty-first-century Scotland, following the 2004 expansion of the EU.

Difference: the reluctance of the Lithuanian community to integrate or assimilate into Scottish society, demonstrated by the emergence of Lithuanian-language newspapers and Lithuanian clubs, and clustered housing.

Significance: the Lithuanian story demonstrates wider, generic themes about immigrant experiences, embracing recruitment tactics, misunderstandings, discrimination, and assimilation. It resurrects a little-known, rarely-studied dimension of immigration to Britain, and reminds us of the diversity of the immigration narrative.