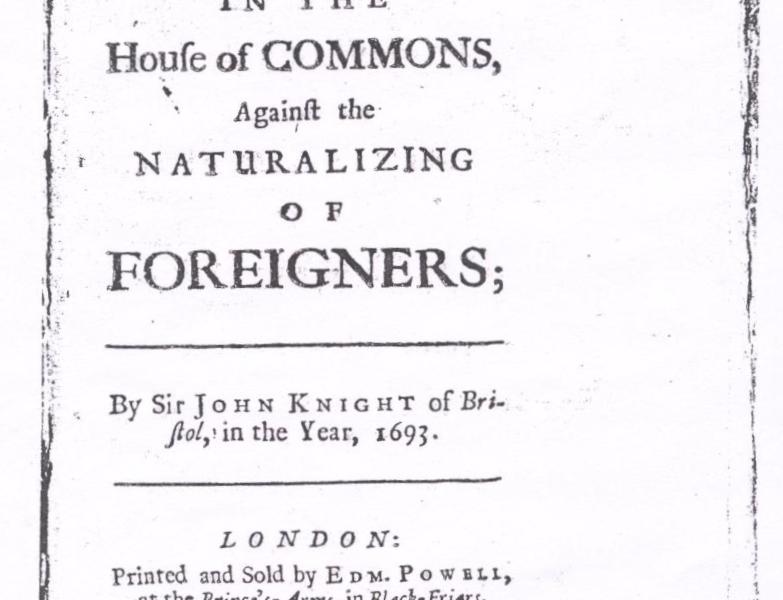 Title page from 'A speech in the House of Commons, against the naturalizing of foreigners; By Sir John Knight of Bristol, in the year, 1693' (Courtesy of the British Library)
Show source description

While Protestant refugees were welcomed into sixteenth- and seventeenth-century Britain, they still faced local and political opposition.

This title page is from a speech to the House of Commons against the Bill for the naturalisation of Foreign Protestants in 1693. Sir John Knight was the mayor of Bristol in 1690 and MP for Bristol 1690-1695. In terms reminiscent of later discussions about migrants and migration, the speech expresses contempt for foreigners, who are characterised as threatening English jobs and culture. Knight concludes his speech with advocating kicking ‘the Frogs’ (i.e. migrants from France) out of the kingdom along with the Bill itself.

The mass exodus of French Protestant refugees (also known as 'Huguenots') who fled from religious persecution in France after the Revocation of the Edict of Nantes 1685 included wealthy merchants, who often had to abandon all of their assets in France, artisan weavers and skilled craftsmen, some of whom were initially forced to camp out in makeshift settlements in English ports such as Bristol (see also: ‘The plight of the Huguenots’ and ‘Huguenot silk weavers in Spitalfields’). Though some came to England, many eventually left for North America or elsewhere in the Protestant West.

The story was similar, although different in very important ways, for the inflow of impoverished Protestant migrants from the war-torn district of the Palatinate in what is now Germany in the years after 1708. Living on the Rhine, the Palatines were often victims of French attacks. The Protestants amongst them were also subject to oppressive treatment from their Catholic ruler. Crop failure, a bad winter and reports of a better life available in England and the American colonies led to the arrival in London of approximately 10-15,000 Palatines in 1709. London's population in those days numbered only around 600,000. 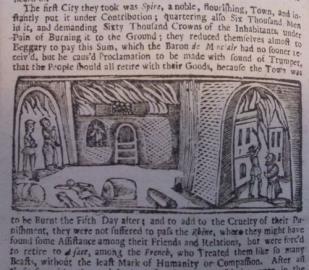 'An account and depiction of refugees' sufferings in Germany, from the State of the Palatines for fifty years past to this present time', London, 1710 (Courtesy of The British Library Board)
The Palatines, most of whom arrived ill and destitute, camped out at first in parks and yards and in government-provided tents in Blackheath, Camberwell and Greenwich. In the beginning they were subsidised by charitable donations from the public – mainly from Whig supporters. The Whigs saw both Palatines and Huguenots as persecuted refugees who deserved their aid and they identified with them as fellow Protestants fleeing oppressive Catholic regimes. In their support, they stressed that many of these refugees had skills as farmers and craftsmen that would enable them to make a positive contribution to the British economy. Daniel Defoe, the author of Robinson Crusoe, wrote a pamphlet in defence of the ‘Poor Palatines’ in 1709, just as his fellow Whigs were pushing through a Bill to naturalise foreign-born Protestants. But this initial welcome came under increasing strain as immigrant numbers increased.

The Tories, who had traditionally opposed this immigration, waged a propaganda campaign against both the migrants and the naturalisation Bill (see main source above). They argued in the press and pamphlets that these migrants were a drain on the economy, took jobs away from the English poor and that though they were largely Protestants, they were not members of the Church of England, and as such posed a threat to the nation’s security. Tory charges gained currency, especially amongst tradesmen and the labouring poor, after it was discovered that there were Catholics amongst the tide of these German-speaking incomers. In the event, many of the Palatines were eventually resettled in the American colonies where they joined other German-speakers to become the largest single group, aside from enslaved Africans, to enter the American colonies between 1680-1780.

A better fate for the Huguenots?

The Huguenots, whose refugee status was more straightforward and who were exclusively Protestant, had a more positive reception in England. Among them were prominent merchants whose international commercial contacts enabled them to lobby on behalf of their fellow co-religionists. Both Huguenots and Palatines had ‘cultural capital’, i.e. were largely literate and had skills and social and religious networks that allowed them to flourish in an expanding capitalist economy spanning the Atlantic. The question of their competing for jobs with the indigenous population was somewhat defused by the fact that most eventually emigrated to the British colonies.

Written by Dr Madge Dresser, Associate Professor of History, University of the West of England