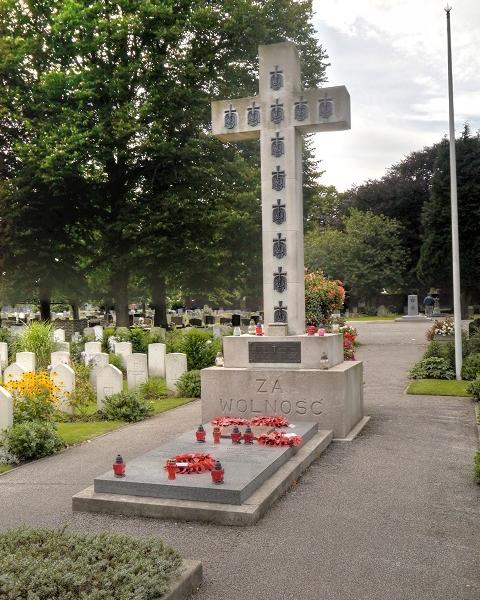 The main sources for this page are extracts from oral history interviews undertaken for PhD research with World War II-era Polish refugees living in the UK. The interviews were conducted in the early 2000s and the Polish participants were quite elderly at the time. The most important aspect of these oral history interviews was the way they enabled these people to tell their stories, and explain what it was like to be a refugee.

In the first, ‘Anna' talks about how she and her family were deported by Russian soldiers in 1940. She tries to explain what it was like living in Siberia – how difficult it was, and how the morals of wartime are different to the morals of peacetime. It was very important for her to share her memories of the chaotic  journeys she went on, and the physical struggles she had.

In the second extract 'Jan' talks about how the Polish airmen who were resettled near Leicester tried to start a Polish community there. His testimony is important because it shows us how hard it is to start up from scratch, and how closely people need to work together.

The picture above is of a Polish war cemetery in Nottinghamshire. There are many places in Britain where the Polish contribution to the Second World War, as Allied troops, is commemorated. It is a very important history for the Polish community, and for British history too. The inscription means 'for freedom' – the Polish forces fought 'for our freedom and yours'.

Invasion of Poland and population displacement

At the end of World War I, the 1919 Treaty of Versailles had taken land from Germany to give to Poland in a new settlement for Polish independence, and borders were also tense with Russia, Poland’s former occupying power. Poland almost immediately ended up in a new war with its eastern neighbour, successfully taking more land eastwards and populating it with Polish people. These post-World War I tensions sowed the seeds for future conflict.

By the late 1930s Hitler was openly campaigning to take back land from Poland, and Poland's fate was effectively sealed when the Soviet Union and Germany made the Nazi/Soviet Non-Aggression pact in August 1939, agreeing to carve up all of eastern Europe between them. The dual invasion of Poland by Germany and the Soviet Union in September 1939 – with Germany invading from the west and Russia invading from the east soon afterwards – unleashed considerable population displacements within the country.

On the eastern side of Poland, Soviet forces targeted the families of army officers and people who were key to local administration, many of whom had only moved to the eastern part of the country in the 1920s, culminating in mass deportations of over one million people to Siberia in 1940 and 1941. Those who survived the journeys to Siberia, and life in the gulags there,  were eventually released after an amnesty with the Russian government in 1941. This amnesty led to the migration of civilians to Red Cross civilian camps throughout India, Africa and the Middle East and the creation of a new wing of the Polish armed forces, the Second Polish Corps. The Corps supported the Allied forces, and many of its members fought in famous battles as Allied troops, including the Battle of Monte Cassino in Italy, and with the air force in the Battle of Britain.

At the end of World War II it was clear that it would be difficult and dangerous for many Polish people outside of Poland to return home, due to their country having fallen under Soviet influence. These displaced Poles settled around the world – in the US, Canada, Australia, and also in the UK, where the 1947 Polish Resettlement Act allowed people connected to the armed forces to stay and work, helping them settle in towns and cities all across the country. This Act was the first time the government had passed a law to settle such a large number of migrants – over 150,000 Polish people ended up in the UK in those early post-war years through this scheme. Thousands more came as 'European Volunteer Workers', people who had been displaced by the war, living in camps across Europe, and were brought to the UK via a government work and settlement programme.

While the important role played by Polish troops in the success of the Allied forces was clearly a significant factor in the creation of the Resettlement Act, the Act itself was also a response to Britain’s need for workers in the post-war period. Immediately before the start of sustained Commonwealth migration, government documents show that Poles and other Eastern Europeans were considered to be 'ideal' immigrants. Not only were they white and Christian, but the settlement programmes ensured they worked where they were needed – in the industries across the country which were most hit by shortages such as building, coal mining, textiles, hotels and catering, agriculture and engineering. Many of these Poles had been highly qualified in Poland before the war, working in skilled professions; like most refugees, they found it hard to translate these skills and status into equivalent jobs and lifestles in their new environment.

Because of this settlement, most larger towns and cities across the UK, north and south, have a Polish presence that dates back to the immediate post-war period. After the trauma of war, and the further pain of being exiled from their home country, these refugees forged new lives and communities, eventually setting up Polish clubs, churches and Saturday schools.

This migration story is important to British migration history in many ways. It shows how closely the war connected Britain to the rest  of Europe, it demonstrates the significance of government support for settling new migrants and it explains the history of one of the largest immigrant populations in the UK at the time, a population which peaked at over 160,000 people in 1951, before sustained migration from the Commonwealth began.

Written by Dr Kathy Burrell, Senior Lecturer in Social and Cultural Geography, Department of Geography and Planning, University of Liverpool

These sources show us one of the key causes of migration – war and forced displacement. They outline a refugee experience that has been important historically but also resonates now. The people caught up in this migration history had to endure long and traumatic journeys, lived in terrible conditions and lost loved ones along the way. It is striking how chaotic their experiences seem. This should remind us of the messy nature of migration, and refugee stories. People often do not realise what is happening at the time when they are caught up with these traumatic events.

In the immediate post-war period Polish refugees struggled to feel at home in the UK. Most people had experienced trauma, and were now living in a new country, doing jobs they had not necessarily trained for, and were unable to go back to a country they missed and loved. One of the most important responses was the development of strong Polish communities across towns and cities. To try to look after each other, and to keep a strong sense of Polish identity, people pooled their resources and over time established Polish churches and community clubs. Most of these are still open now.

In time, the 1947 Polish Resettlement Act was passed by the government to employ and assist these refugees and this helped them to settle. The legislation was significant because it sought to help the whole community of Polish people who needed new residence, rather than focusing on individuals.