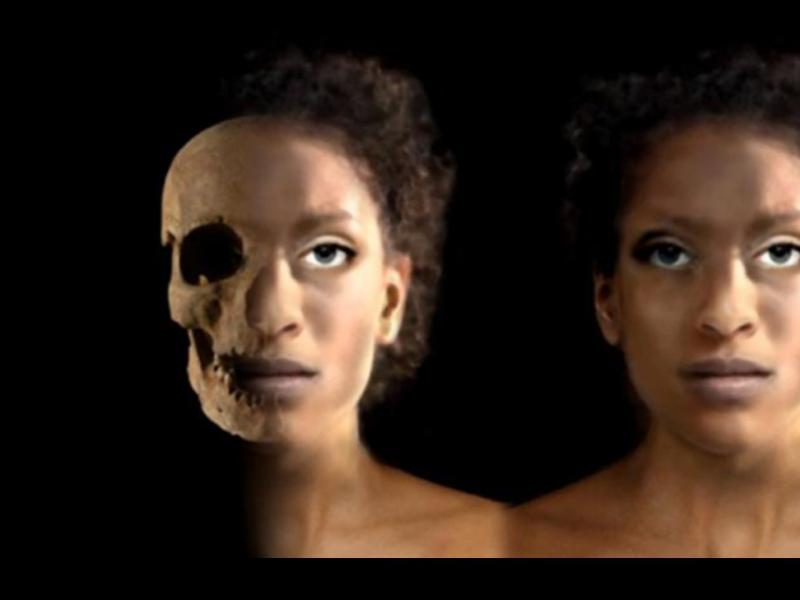 The buried remains of a woman with African ancestry from Roman York were discovered in Sycamore Terrace, York, in 1901.

The skull and teeth of her skeleton, which have been stored in Yorkshire Museum, were recently examined by scientists at the University of Reading.

Migration to Britain in the first century was part of the expansion of the Roman Empire and the outcome of colonial and imperial processes. The Roman Empire grew from the city of Rome to encompass Europe, North Africa and the Near East. Britain was first invaded by Caesar in 55/54 BC and then conquered in 43 AD by the Emperor Claudius.

The reasons for the Roman Empire’s expansion are much debated. There was obvious economic gain to be had, and military security is often given as a reason for the Empire's wars, but competition for military honours and internal politics also played an important part in growth. Emperor Claudius, for example, was initially perceived as weak and tried to increase his prestige by conquering Britain.

There were not enough citizens of Rome or even Italy to control the whole Roman Empire, but there were many people in the provinces that had accepted Roman rule. Inscriptions carved into stone to commemorate the dead on tombs, or to record who set up an altar to the gods, show that people came not only from Italy, but also from Gaul, North Africa and Spain; in the later Roman period new troops were recruited from Germany and even from beyond the frontiers of the Empire.  The Roman conquest of Britain led to the migration of many soldiers and administrators, merchants and also women and children.

It is difficult to estimate total numbers of people who came to Britain during the era of Roman control: troop movements are quite well-documented but there are no surviving records of how many civilians journeyed to the province. Stone inscriptions were only erected by a few wealthy individuals who had adopted Roman ways of doing things; from the whole of Britain only about 2,500 stone inscriptions survive. The analysis of skeletons offers archaeologists an opportunity to identify the origin of many more individuals by studying skull shape as well as isotope and DNA signatures (more on this below). Evidence suggests that, over time, locals and incomers intermarried, and that the populations in major urban and military sites were very diverse.

Due to the relative lack of written sources for the Roman period, we often do not know why individuals came to Britain. Some migration was voluntary, to take advantage of opportunities in a new Roman province, but there was also forced migration, for example, of slaves. We know even less about how the local population responded to incomers; while there were revolts against Roman rule there is also much evidence that suggests integration. Many of the incomers occupied powerful positions, and their practices and beliefs probably influenced the lives of local peoples.

One way we can learn about early migration history is through the work of archaeologists, who have studied human remains to learn more about the people of Roman Britain. For example, the grave of a young woman (see main source above) was discovered in 1901 in Sycamore Terrace York; she was buried in a stone sarcophagus with very rich grave goods (objects placed into a burial for the afterlife, or as an offering to the dead) in the later 4th century. The objects placed into her grave included bracelets made from local jet and more exotic ones made of ivory. A short inscription on a bone mount, that once probably decorated a box, suggests that this high status young woman was a Christian as it says ‘Hail, sister, may you live in God’. Recently, the skull and teeth of her skeleton, which have been stored in Yorkshire Museum, were examined by scientists at the University of Reading.

The shape of her skull suggests that she had North African ancestry; this is not very surprising in a place like York, where inscriptions and written sources mention Africans. People from Africa who came to Britain include the Emperor Septimius Severus, who was born in what is Now Libya and ruled from AD 193-211.

Archaeological scientists can also analyse the chemical signatures preserved in human teeth. The ratios of stable isotopes such as oxygen, carbon, nitrogen and strontium in human teeth can provide information about ancient diet and origin. Oxygen and strontium signatures vary depending on the climate and underlying geology of the area where an individual grew up. Individuals from hot, coastal, areas will have a different signature to those who grew up in cooler areas of continental Europe. However, it is important to stress that isotope analysis is better at excluding local origin (i.e. an individual’s signature is very different from the local signatures) than pinpointing a specific area of origin (i.e. many areas have similar isotope signatures).

Studies of the remains of the Ivory Bangle Lady suggest that she was born and brought up in the south of Britain, or the continent, rather than in Africa. Archaeologists can interpret this finding in a number of ways. For example, it is possible that one parent of the Ivory Bangle Lady was from North Africa, but that she grew up in a different part of the Empire. Other skeletons from York and other Romano-British towns show that some incomers (as identified by their isotopic signatures) look almost like locals in terms of their burial rites and grave goods, while some archaeologically very exotic burials are in fact those of people born locally. Why could this be? We need to consider the fact that the dead do not bury themselves. Grave goods and burial rites might be shaped by parents or partners who had a different geographical origin to the deceased. A few hundred skeletons from the Roman period have now been studied by scientists using what is a very expensive technique, and the results show high levels of mobility and migration – up to 30% in some towns. However, the sample study is biased as it examines mostly unusual and exotic burials, so actual migration levels were likely much lower.  A different picture of movement would probably emerge if countryside burials for the same period were sampled.

Romans Revealed - Key Stage Two website, which allows students to excavate the skeleton of the Iron Bangle Lady from York by clicking on the skeleton and viewing short videos describing the grave goods and the science behind the findings.

Department of Archaeology, University of Reading - There is a lesson plan and PowerPoint on the Ivory Bangle Lady from York.

Museum of London: The Harper Road woman - discover the story of a 14-year old girl from the southern Mediterranean who lived in the Roman city of Londinium, over 1500 years ago.