Sailing from St. Vincent: the story of Jannett V. Creese 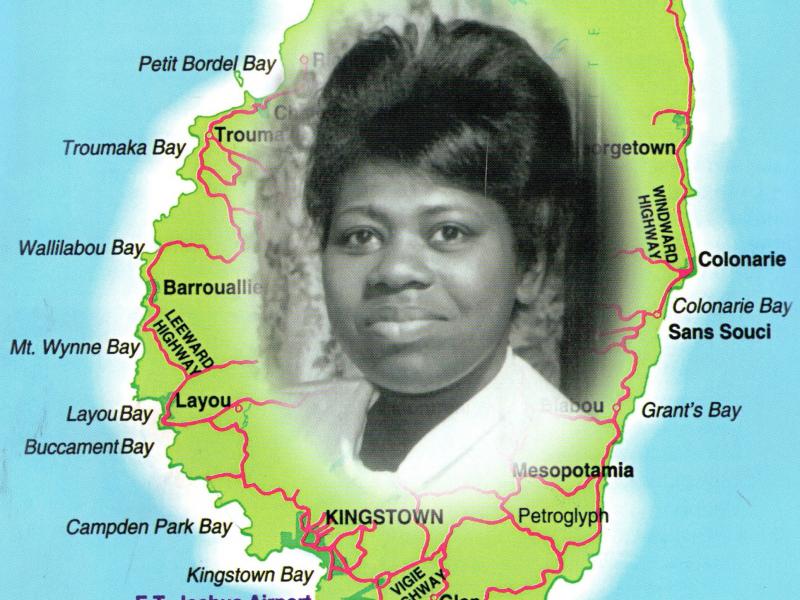 Jannett V. Creese's autobiography, My Windward Side,  is typical of many such publications printed from the 1980s onwards. It was released in 2002 and was cheap in cost and cheerful in appearance. Local authorities – in this case Stockport Council – or community projects encouraged ordinary people to write down or record their experiences. The aim was to publish the life stories of those who do not normally feature in history books such as those in ordinary occupations, women, and migrants. In this case, Jannett could be said to fit into all three categories.

Stockport Council was particularly keen to present the black presence in the town – the only other person they were aware of was Arthur Wharton from the early 1900s who was Stockport County’s goalkeeper. As has been humorously noted, ‘Wharton’s significance is not that he was one of many County failures over the years, but that he was Britain’s first professional black footballer and, indeed, at the start of his sporting career he had been anything but a failure.’

Jannett’s autobiography is a particularly rich source as she writes powerfully about her life in the Windward Islands, her journey to Britain, and her experience making a new home eventually in Stockport. In her case, religion played an important role before and after migration. Her writing style is informal but engaging and Jannett manages to show the pressures of being a female migrant but also her sense of achievement of making a new life for herself.

You can find excerpts from Jannett's autobiography here.

Recruiting for the NHS: Caribbean nurses in Britain

Jannett Creese was born in 1940 on Saint Vincent, a part of the Windward Island chain of the Caribbean. The oldest of thirteen children, Jannett came to Britain to train as a nurse in London in 1959 after having grown frustrated with her early career as a teacher in Saint Vincent. On the completion of her nursing studies in London, she went on to further training in midwifery in Birmingham, returned to work in London and then moved to Stockport in the north west of England in 1992, to work in hospitals in the Greater Manchester area.

Jannett Creese in uniform (image from Jannett V. Creese, My Windward Side, 2002)
Jannett was one of many thousands of Caribbean nurses recruited by the National Health Service (NHS) after the Second World War who, alongside doctors and specialists from the New Commonwealth, and the contribution of many other migrants, enabled it to function through to today. The NHS, formed in 1948, was desperate to expand its workforce as it aimed to provide an integrated health care system for all free at the point of entry. As early as 1949, the NHS began active recruitment from the Caribbean to train nurses and by 1955 there were, according to Stephanie Snow and Emma Jones, ‘official nursing recruitment programmes across 16 British colonies and former colonies’.  Jannett was one of these recruits, albeit from one of the smallest of the West Indian islands. Most of those recruited from the colonies had to commit to a three-year contract but Jannett, with her prospects limited at home, saw her move to Britain as a permanent migration, and this turned out to be the case. Jannett was a very successful and dedicated nurse but what singles her out amongst her peers is that she has published her autobiography, My Windward Side (see source above). The book enables her triumphs and challenges as a black female migrant to Britain to be understood.

The women of Empire

Although the black migrants that came to the UK in the years immediately after the Second World War from West Africa and then the Caribbean were largely male, the proportion of women increased during the 1950s. The focus on the Empire Windrush with its 492 West Indians on board which arrived in Tilbury Docks in June 1948 has tended to disguise the full complexity of black migratory movements to Britain. First, it ignores the earlier pre-1939 presence in Britain which was around 10,000 people (see: 'African freedom in Tudor England', 'Britain's merchant shipping', 'The African diaspora'). Second, most black migrants who came in the years from 1948-1951 were from West Africa and not the Caribbean. By the early 1960s, there were over 100,000 West Indians in Britain but almost all of these had come in the 1950s. Third, although there were only around 20 West Indian women travelling on the Empire Windrush, the proportion of women grew in the 1950s, many coming to train as nurses. Fourth, although most of those on the Empire Windrush settled in London, by the 1950s Caribbean migrants settled in most cities and towns in England.

Jannett and her husband were some of the first to settle in Stockport and in her memoir she relates the mixed responses they and their children received. Mainly there was friendship and support, but there was also an element of surprise and occasionally blatant racism. This pattern was also replicated in Jannett’s career as a nurse. Racism has far from been removed in the health service (from fellow staff and patients alike), but there are now mechanisms for it to be addressed and more familiarity with what has become one of the most diverse workforces in contemporary multicultural Britain.

Tony Kushner (2012), The Battle of Britishness: Migrant Journeys, 1685 to the Present

Andrea Levy (2004), Small Island  – a novel set in the era of Jannett Creese's arrival to England which tells the story of Caribbean migrants

Mike and Trevor Phillips (1998), Windrush: The Irrestible Rise of Multi-Racial Britain – an overview of the Windrush-era.

Stephanie Snow and Emma Jones, ‘Immigration and the National Health Service: putting history to the forefront’, History and Policy, 8 March 2011