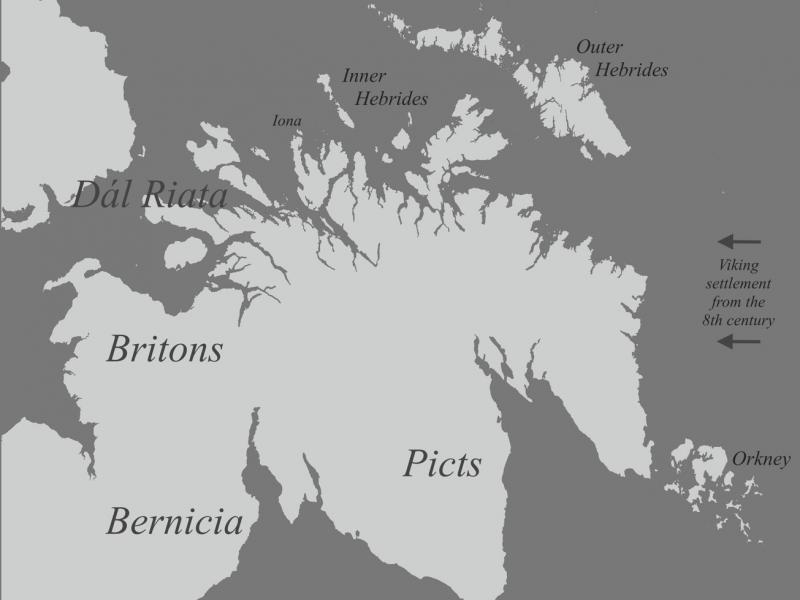 The map depicts the area of northern Britain that is now Scotland. In the early middle ages, this area was inhabited by peoples of a number of different backgrounds  - Gaels, Britons, Picts and Anglo-Saxons. A fifth group, Scandinavians, would become a presence in the far north from the eighth century.

Northern Britain in the seventh century

In the early middle ages, the area of northern Britain that is now Scotland was inhabited by peoples of a number of different backgrounds – Gaels, Britons, Picts and Anglo-Saxons. A fifth group, Scandinavians, would become a presence in the far north from the eighth century.

The map in the main source shows that Northern Britain in the seventh century was home to several different groups. In the west was the Gaelic-speaking kingdom of Dál Riata, encompassing Argyll, the Inner Hebrides and Antrim in the north of Ireland. East and north of Dál Riata were the Picts. To the south-west were the Britons of Dumbarton. The Picts and Britons spoke Pictish and Cumbric, respectively – languages that had evolved from the Brittonic language spoken in Britain since the Iron Age (the closest modern-day relative of these Brittonic languages is Welsh). Finally, to the south-east was the Anglo-Saxon kingdom of Bernicia, which straddles the modern-day Scottish border. Old English, the antecedent of modern English, was spoken here.

Here we discuss peoples as defined principally by the language they spoke; i.e. the Picts were those who spoke Pictish. But we must bear in mind that the language of a population can change quite easily. For instance, somebody whose grandparents spoke one language might themselves speak an entirely different one, because of invasion or political or cultural changes. Therefore, we must be careful not to make any assumptions about the ‘ethnic’ makeup of a population based on the language they spoke.

The Anglo-Saxons migrated to Britain from the continent in the fifth century (see: The Anglo-Saxon invasion and the beginnings of the 'English'). The northernmost Anglo-Saxon kingdom was Bernicia—this kingdom crossed over into what is now southern Scotland. Anglo-Saxon sources, such as Bede’s Ecclesiastical History of the English People, written in 731, emphasise the Anglo-Saxon origins of Bernicia. Certainly, the ruling elite of Bede’s day were culturally Anglo-Saxon. Archaeological and place-name evidence suggests, however, that a significant part of the population were Britons. Even the name ‘Bernicia’ is Brittonic in origin. These cultural links did not stop the Bernician kings from expanding west into Brittonic territory during the seventh century, when the kingdom was at the height of its power.

For many years, it was accepted that Gaelic-speaking western Scotland came into being when invaders arrived from Ireland and drove out the locals. This was based on later medieval traditions that ascribed the founding of Dál Riata to the semi-mythical ‘Sons of Eirc’, from whom all the kings of Dál Riata were descended. Modern historians are very sceptical of these kinds of medieval ‘origin stories’—which were often written centuries after the events they portray. If we cannot trust our medieval written sources, we might turn instead to archaeology, as we would expect an invasion to leave some mark on the archaeological record. However, archaeology shows that there was continuity in this region right up until the Viking Age, which suggests that there was no invasion from Ireland.

According to linguistic historians, it may well be the case that Gaelic was always spoken in western Scotland. The mountain ranges of central Scotland are a significant natural frontier: it is quite likely that Gaelic developed on one side of that frontier and Pictish on the other. There is no reason, then, to think that invaders from Ireland pushed the original inhabitants from Argyll and surrounding areas.

While there may not have been a significant large-scale Gaelic migration into Argyll in the early medieval period, there was certainly much movement of individuals—both between the two islands, and between Dál Riata and other regions of northern Britain. This was an era of significant cultural exchange. In the sixth and seventh centuries, many Irish people would leave their homeland in the name of Christianity—they sought to live as ‘exiles’ in foreign regions, spreading the word of God and founding monasteries.

A good example of this kind of immigrant to Scotland is Columba. A native of Donegal in the north of Ireland, Columba travelled to Scotland in the 560s. He obtained from the Dalriadan king a small Hebridean island on which to found a monastery. This island monastery, called Í (now Iona), would become a centre of learning that produced the earliest literature from Scotland (written in Latin). Columba also travelled to the eastern parts of Scotland, where he is credited with converting the Picts to Christianity. Columba is the most famous example, but there were many other Christian missionaries from Ireland and from other regions. Sometime in the sixth century, for instance, a Briton called Ninian travelled north to evangelize to the southern Picts.

The coming of the Vikings

In the late eighth century, the Christian peoples of Britain and Ireland reacted with shock to a series of violent attacks across the two islands—the Vikings had arrived! These attacks are recorded in the Irish and Anglo-Saxon chronicles—documents, typically kept in a monastery, that recorded the important events for every year. In the 790s, the chronicles record attacks on monasteries in Northumbria and the east coast of Ireland. However, we must bear in mind that the chroniclers had their own biases: these Irish and Anglo-Saxon monks were not particularly interested in events outside of monastic communities like their own, or in events far away from them in northern Britain. There may have been many Viking attacks in the far north, or attacks on non-ecclesiastical centres, that we simply do not hear about in the sources.

Where did these invaders come from? The Vikings who first attacked Lindisfarne and other monastic settlements in the late eighth century were identified in the chronicles as coming from Hörðaland in western Norway. This makes sense, geographically, as the western Norwegian coast is relatively close to the Northern Isles. This area of Norway is also where archaeologists have uncovered the most goods from Britain.

At some point, Scandinavian attacks turned into Scandinavian settlement. In northern Britain, this was concentrated in the Northern Isles, the Outer Isles and parts of the northern mainland (Caithness and Sutherland). It is not clear when exactly the first Scandinavians began to settle down in the far north. It was certainly a gradual process. Archaeological evidence would seem to indicate that Scandinavian settlement only became widespread in the second half of the ninth century—this is when we find burials in a pagan, Scandinavian style.

These settlers were different, then, to the Danish armies who invaded the south of Britain in the ninth century (see Making peace: Scandinavian migrants and King Alfred's 'fyrd'), though they would have spoken more or less the same language. For the far north, unfortunately, we do not have the written sources that are available for the Danes in England. The exact extent and chronology of the settlement of the far north is still debated by historians.

The Scandinavianisation of the far north

By about 1200 CE, most of the far north and north-west had become entirely ‘Scandinavianised’. The local population spoke Norse, and Norse place-names had replaced those which had existed before the arrival of the Vikings.

But how exactly did this Scandinavianisation come about? This is a very difficult question, as we have no written sources from the far north from before the twelfth and thirteenth centuries. Historians are still debating this question and have come up with two competing explanations for the causes of the Scandinavianisation process:

1) That the invaders completely replaced the existing population. The original inhabitants were either killed or driven out.

2) That much of existing population remained. As was the case with Normans in 1066, only locals at the elite level were replaced. Those who had previously been Pictish, or Gaelic, now adapted to new identity – that of the new ruling class. They learned the new language and adopted the cultural traditions of the invading group.

Although this is still a contested issue among historians, a number of points are worth noting here. Firstly, it is probable that a single model does not apply across the whole of northern Scotland. There was undoubtedly regional variation. Secondly, there are many centuries during which these regions are invisible to us in the historical record—processes of replacement or cultural adoption may have taken place over a very long period.

Christianisation of the Scandinavian settlers 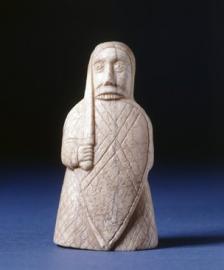 The Lewis Chessmen dated c. 1150–1175.. A chess-piece, made of walrus ivory, depicting a warder in a long garment, armed with sword and shield. Image courtesy of The British Museum Online Collection.
One thing that we can point to as a long-term effect of this migration is the Christianisation of the Scandinavian settlers. By about 1000 CE, stone sculpture in Scandinavian Scotland begins to reflect a religious and cultural shift – at this time, pagan burials disappear from the archaeological record. Instead, we begin to find Christian grave markers carved with Norse runes. Slowly but surely, the Scandinavian settlers had taken on board the religion of the natives. This suggests a high level of cultural contact between the settlers and the surrounding peoples, despite the language barrier.

The influence of these migrations can be seen very clearly in the place-names of Scotland. In the far north, for instance, Scandinavian place-names are extremely common. In Shetland and Orkney, we still find many place-names ending in –setter or –ster, derived from the old Norse word 'setr', meaning ‘dwelling’. In the south and west, on the other hand, place-names derived from Gaelic are common. Travelling through Argyll today you will come across many place-names that begin 'Kil–' (from Gaelic cill, ‘church’). The Gaels of Dál Riata have also indirectly lent the country its name. The inhabitants of Dál Riata were called Scotti in Latin, a name previously applied by Roman writers to the inhabitants of Ireland. It is from this name that the modern name Scotland is derived.

In the later middle ages, the Gaelic, Pictish and British kingdoms would merge into the kingdom of Alba, a Gaelic-speaking realm, which covered much of the same territory as modern-day Scotland. Later still, the Northern Isles and the Hebrides would be incorporated into this kingdom. The country that emerged—Scotland—had been formed by many centuries of population movement, both large-scale migrations and the movement of individuals.

The Anglo-Saxon invasion and the beginnings of the 'English'