Seafarers and stowaways in ‘London’s Harlem’ 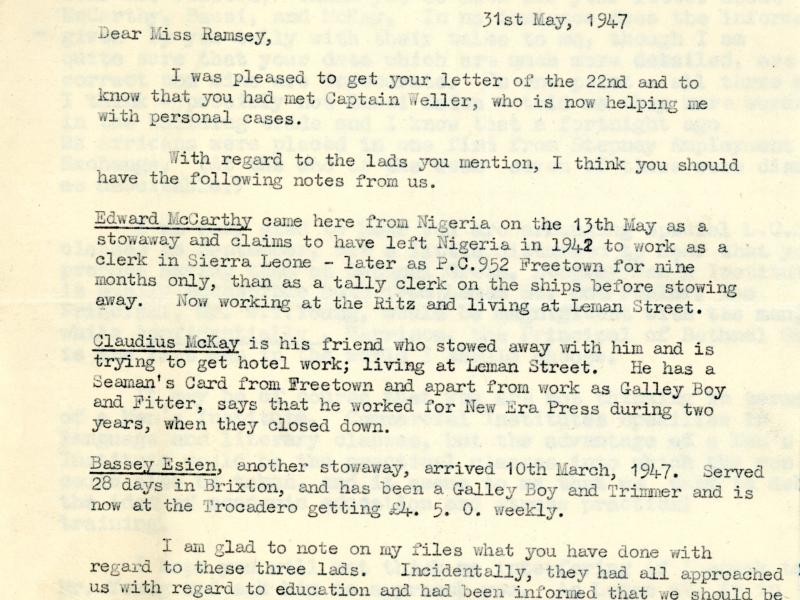 A 1947 letter from Mr Bullaid of the Colonial Office Welfare Department, regarding Edward McCathy, Claudius McKay and Bassey Esien, who were all African stowaways to the Stepney area (Courtesy of Tower Hamlets Local History Library and Archives)
Show source description

Edith Ramsay (1895–1983) was an educationalist, community worker and local councillor who served on a Colonial Office Advisory Committee and was concerned with the issues faced by newly arrived immigrants in Stepney from the 1940s onwards. Her collection of letters, notes and newspaper cuttings reveal the different stories and experiences of African and Caribbean people living in London’s East End during the post-war period.

The old borough of Stepney

Stepney was a borough in London’s East End, in close proximity to the London Docks. It was formed in 1900 and incorporated areas including Whitechapel, Wapping, Shadwell and Limehouse. In 1965, Stepney was absorbed into the newly created London Borough of Tower Hamlets, alongside neighbouring Poplar and Bethnal Green.

Stepney had, for a long time, been home to a small African and Caribbean population, the majority of whom had arrived aboard trading ships. For example, a parish register from St Dunstan’s Church in Stepney records the christening of John Wilkes, described as 'a Negro Black of M.E.O.T. (Mile End Old Town) aged about 28 years', dated 10 September 1780.

By 1944, a report commissioned by a committee of ‘concerned residents’, chaired by Rev. St. John Groser of St George-in-the-East Church, claimed that approximately 400 black settlers lived in the Stepney area, half of whom were Indian (the term ‘black’ applied to all non-white people at this time), nearly a third African and less than a tenth Caribbean. These numbers were supplemented by a transient population of seamen and black US troops amounting to around 300. When the war ended, many African and Caribbean seamen chose to remain in Stepney and seek employment, instead of returning home where job opportunities were scarce. They were joined by African and Caribbean stowaways who, like their predecessors, settled in and around Cable Street, a poor, working-class area in Stepney, badly afflicted by bomb damage.

Despite their relatively low numbers, the perception at the time was that the majority of Cable Street’s residents during the immediate post-war years were black and, as such, the area became known in the national press as ‘London’s Harlem’. It was also labelled ‘The Coloured Quarter’ by sociologist Michael Banton in his 1955 study of the area. Although some were highly qualified, many African and Caribbean men were only able to secure unskilled or semi-skilled work, with many being employed as labourers, porters and stokers.

An article published in The Times during January 1950 illustrates some of the difficulties faced by African and Caribbean immigrants in London’s East End, namely unemployment and squalid living conditions:

‘Before the war there was a large Indian population in the area, but it disappeared during the bombing. About 1943 the immigration from West Africa began, the men occupying the empty houses. Coloured American and Canadian troops went there on leave and since the war stowaways from West Africa and the West Indies have tended to drift there as well as the seamen who are casual residents. There is now a fairly big male colony of different nationalities, and they do not all mix well. A great many are unemployed and all are living in squalor. The combination of low wages, poor housing stock and discrimination also resulted in many African and Caribbean settlers being unable to secure decent accommodation. Instead, they often found themselves living in run-down, overcrowded and insanitary conditions. With few recreational facilities available, many of the settlers tended to socialise with members of the small Asian, Maltese and Arab communities who ran the busy cafes and lodging houses in the Cable Street area, often thought to be venues for prostitution, gambling and the illegal sale of goods.’ – 'Coloured Men’s Needs’, The Times, 31 January 1950

During the immediate post-war years, racial tensions began to escalate and racially motivated attacks were reported in the press, such as a night of unrest recorded in The Sunday Dispatch on 27 February 1950. The article describes a 'crowd of more than 200 [who] roamed the East End of London to attack coloured men'. According to the Dispatch's account, two men, John Pearce, 32, and Phillip Ellul, 24, were fined '20s. each ... for using insulting words and behaviour. Both men were stated by the officer to have been jostling coloured men off the pavement in the Cable-Street area. Ellul (who pleaded not guilty and said he was talking to a friend when the police car pulled up beside him) had a piece of cast iron in his pocket.' 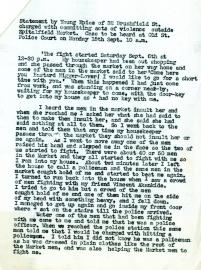 The statement of Young Epiae of 32 Brushfield Street, regarding a racist attack in 1947 (Courtesy of Tower Hamlets Local History Library and Archives)

Similar aggression is evident in the statement of Young Epiae. Describing his attempts to confront men who had accused his white female housekeeper of being a prostitute, Epiae's account not only displays the violent language that could be aimed at black men in this area at this time, but also the speed at which those words could shift into violent actions. His story ends with the statement that one of the men who attacked him identified himself as a policeman and attempted to have Epiae charged with assaulting an officer.

Racial tensions like these only worsened over the course of the 1950s, when Cable Street became the focus of moral panic as the issue of prostitution gained greater prominence in Parliament. There was prostitution in the area historically (a home for 'penitent prostitutes' had been established nearby in the 18th century for example) but in the 1950s/60s the area became notorious for it, portrayed in the national press as London’s red light district in the same way that Soho was later described.

Edith Ramsay, who gained the nickname ‘The Florence Nightingale of the Brothels’, was the principal of an adult education institute in the area, a local councillor and unofficial community worker. She was determined to prevent unsympathetic observers turning the issues in the area into issues of race, and focused instead on the plight of the young women drawn into prostitution.

Despite Ramsay's and others’ efforts, the area was targeted for slum clearance in the late 1950s. Slum clearance schemes were generally initiated either by local authorities, in this instance by Stepney Borough Council, or by the London County Council (LCC). Sometimes people were rehoused locally in new estates, otherwise there was a tendency for people to migrate eastwards to Essex to new LCC estates being built there or private housing. Generally, at this time, slum clearance schemes were welcomed by local residents. In Stepney, this clearance resulted in the displacement of much of the local population, including many African and Caribbean immigrants. 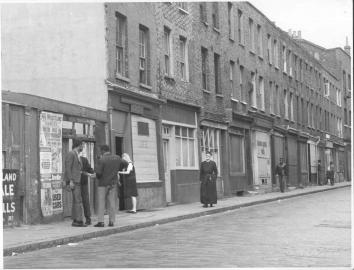 Although there was a continued growth of the African, Afro-Caribbean, and Asian presence, via seafarers settling, into the 1950s, the dramatic increase in Bengali immigration to the area in the 1960s and especially in the 1970s meant that the remaining black population was demographically over-shadowed and the brief life of a small community of people of African origin came to an end (on the development of this area see also: ‘The East London Mosque’ ).

The story of migration to Stepney is a rich one, with various migrant groups coming to live and work in the area over time.

This case study offers the opportunity for students to draw a number of connections and comparisons with other migration stories on this site across key themes, such as:

- The relationship between war service and migration to Britain

- The relationship between Britain's shipping industry and migration

- The reoccurring theme of discrimination and violence against migrants

Students might also be interested to explore broader questions such as the changing meaning of the term 'black' over time, slum clearance schemes in Britain, and the history of New York's Harlem area.

Music and migration: songs from the Irish in Birmingham