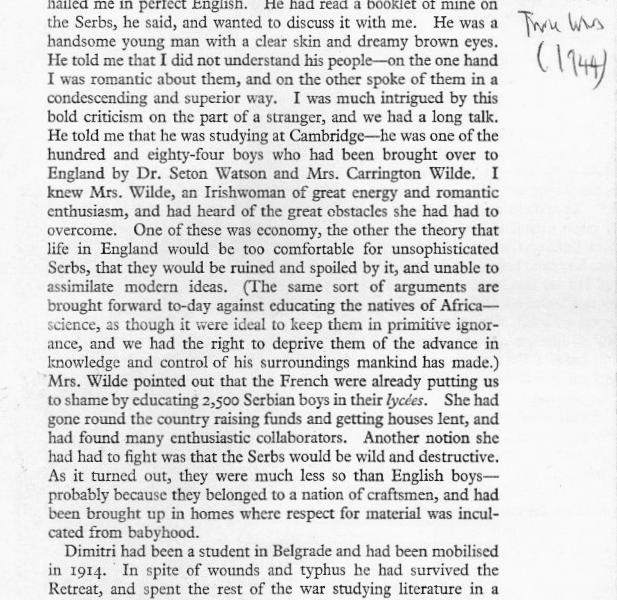 Extract from Francesca Wilson, In the Margins: Recollections of Relief Work in and between Three Wars (London: John Murray, 1944)
Show source description

Francesca Wilson (1881–1981) was involved in refugee work in the First World War, the Spanish Civil War and the Second World War. She was born in Newcastle to an active Quaker family and educated at Newnham College, Cambridge (the only college in the university at the time that was for women) and became a schoolteacher. During the First World War, she joined the Friends’ War Victims Relief Committee, a Quaker group, and went to Corsica to work to help Serbian refugees with the Serbian Relief Fund. Wilson continued to work with refugees during the years between the World Wars and offered aid to those from the Spanish Civil War. During the Second World War when her memoir In the Margins (1944) was written, she was working for Polish refugees.

Inspired by the example of the Suffragettes (see: ‘Indian aristocrats and protest’), Francesca Wilson and other women played extremely important roles in relief and refugee work during and after the First World War. During the 1930s, for example, women were prominent in the organisations set up to help refugees from Nazism and they continued this work during and after the Second World War. Such activities were often dangerous and demanding, but without them many victims of war and persecution would not have survived. In Britain during the twentieth century, there were as many as 5,000 individual organisations set up to help refugees. This is a very neglected tradition of help and the role of women within them have been further marginalised by historians.

The plight of the Serbian people was desperate following the military defeat of their country in the early stages of the First World War. Hundreds of thousands, including men, women and children, fled the country. It is estimated that between 18,000 - 27,000 died in the journey towards Greece and temporary freedom in 1915. The Serbian Relief Fund was set up to help these refugees and to find places of safety for them. Some 3,000 Serbian children went to France and, to relieve the pressure, the Serbian Relief Fund hoped to bring 600 of them to Britain. Due to a lack of resources and the negative attitude of the British government, in 1916 only roughly half that number was given temporary refuge. The government feared the children would be unsuited to life in Britain and would be a drain on resources. A senior Foreign Office official in September 1917 noted ‘We were ourselves always opposed to these boys being brought to England, but Mrs [Carrington] Wilde [of the Serbian Relief Fund] insisted upon it’.

Similar opposition was voiced by the British government in 1937 against the entry of child refugees from the Spanish Civil War, but again activists succeeded in bringing them to Britain. However, in November 1938, after the Kristallnacht pogrom, the government was more sympathetic to the entry of Jewish children and others to be brought from Germany, Austria and eventually Czechoslovakia (see 'Jewish refuge and the Nazi regime'). Campaigners persuaded the British Home Office that the fate of these young victims of Nazism was so dire that such a movement to Britain without their parents was morally defensible.

In the end, 300 Serbian children came to Britain. Almost all of them were boys – the aim of the Serbian authorities was that they would become the future manhood of an independent Serbia after the war. They were distributed in sixteen small ‘colonies’ across England, Scotland and Wales where they were educated alongside British pupils at both state and private schools. The colonies were all located in urban areas and most were in small hostels, rather than private homes (differing from the Belgian children at the same time and those escaping Nazism in the 1930s, where only a minority were placed in hostels). The hostels for the Serbians varied in quality and management but they allowed the children to maintain a sense of solidarity at a time of tremendous trauma and upheaval in their lives. 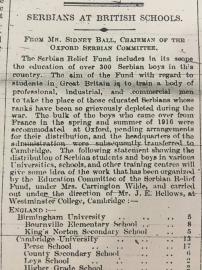 In addition, over sixty attended British universities where they studied engineering, agriculture, forestry, commerce and medicine. Roughly 30 were given jobs in engineering and agriculture which was not always a happy experience. They regarded the work as too hard and unrewarding, one complaining to the Serbian Relief Committee that ‘we are getting weaker everyday’.

Many of of these children had fought alongside adults and had witnessed war at its most barbaric. Yet despite the fears of the government and others, the Serbian children adapted quickly in Britain and soon excelled in their studies, winning academic prizes and succeeding in sport. The latter included cricket which would have been totally alien to them! Whilst there was some limited local opposition, this was rarely expressed and when they left at the end of the war there was much affection towards them. In turn, they had fond memories of Britain.

After the war, all these children returned to Serbia. This was also the case with almost all the quarter of a million Belgians who came to Britain as refugees during the war. After 1918, hostility towards ‘aliens’ (as these refugees were now perceived – see: 'Jewish immigration and the Aliens Act'), ensured that this would be carried out quickly, and, with the Belgians, without much sensitivity. 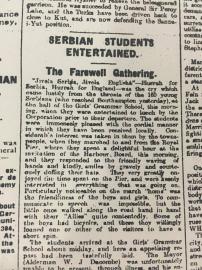 Refugee children in Britain: past and present

Although a small movement, the Serbian refugee children were part of an important but neglected tradition of migration to Britain. Before the First World War, Jewish orphan children whose parents had been killed in pogroms (organised riots) in Tsarist Russia were found homes in Britain. In the First World War itself, over 50,000 Belgian children were part of a massive refugee movement of 250,000 following the German invasion of Belgium in 1914. In 1937 close to 4,000 Spanish refugee children came to Britain and between 1938 and the outbreak of the Second World War 10,000 mainly Jewish children came as part of what is now known as the Kindertransport. After the war refugee children, accompanied and unaccompanied, were part of many different movements to Britain. Today the number of unaccompanied refugee children in Britain far exceeds that of the Kindertransport.

It should also be noted that in the cases of Belgian, Serbian, Spanish and Jewish children from 1914 through to 1946, most of the funding to look after them in Britain came from private sources. Moreover, the government insisted that their stay should be temporary. Indeed, it is rare that refugees have been allowed into Britain without restrictions. Even then their entry has usually come as a result of pressure from public opinion and the press. This continues today with young asylum seekers – the attitude of the government appears less generous to their entry than that of many ordinary people in Britain. 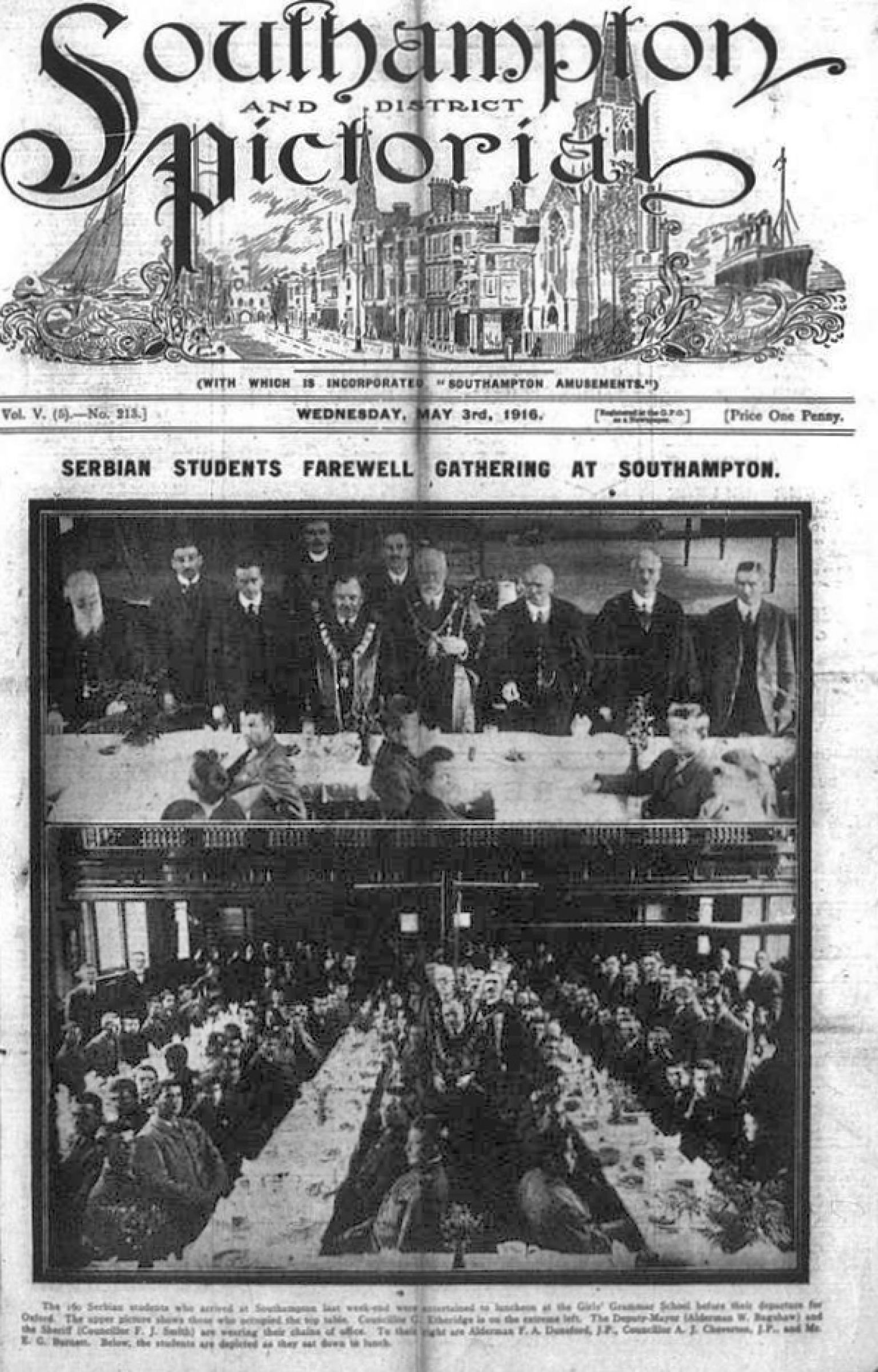 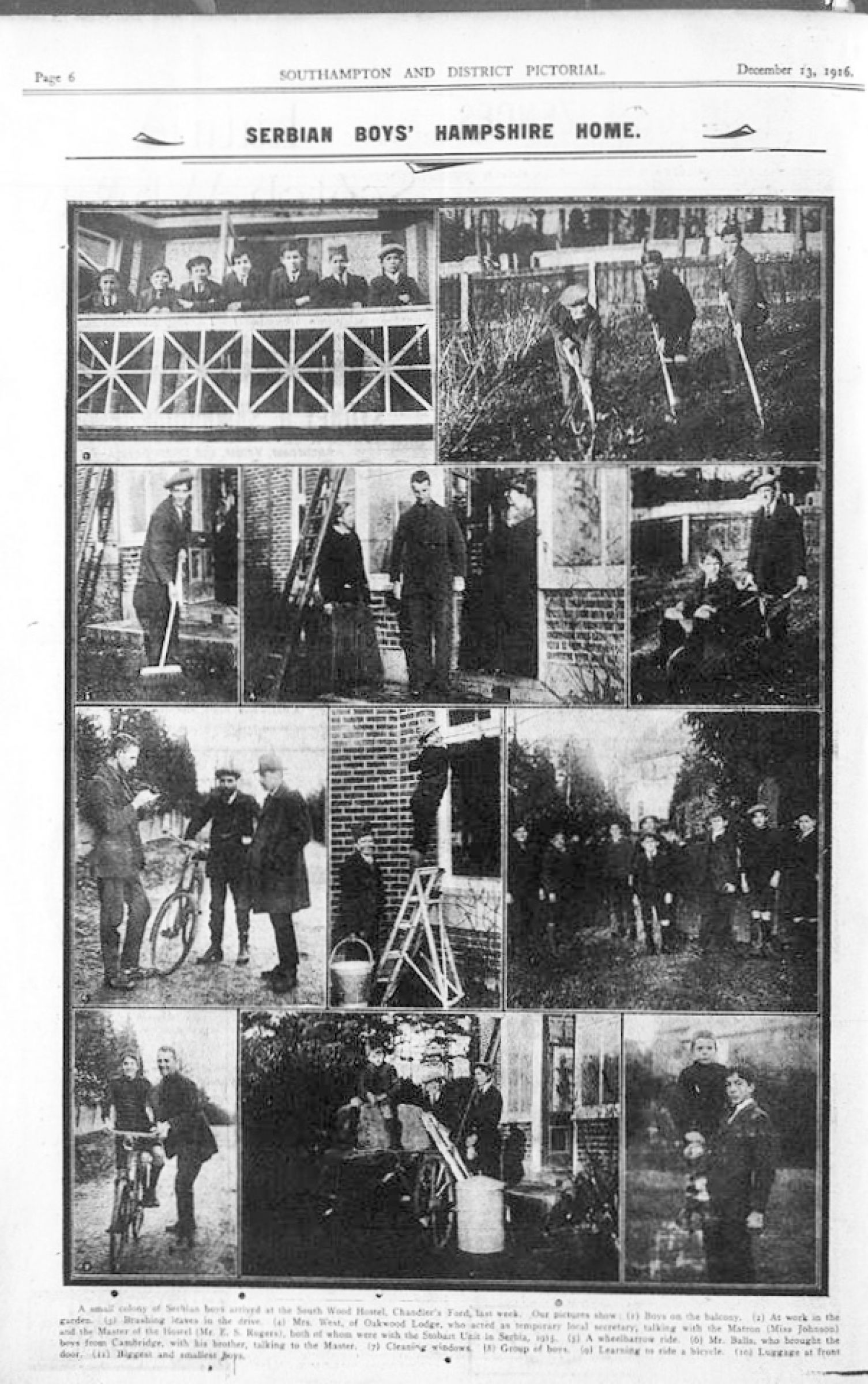 Images of Serbian refugees from the Southampton and District Pictoral, 3 May 1916 and 13 December 1916

The Herioter, December 1916 and March 1917 – School journal from Edinburgh on the experiences of and responses to these refugees

Tony Kushner and Katharine Knox (1999), Refugees in an Age of Genocide

An image of Serbian refugees on the move

Despite the fact that the number of Serbian refugees brought to Britain was relatively small and those who were brought here returned home, for the refugees themselves, temporary relocation was very important in helping them to rebuild their lives. For those helping the Serbian children it was an important part of their wider humanitarian efforts. Many ordinary children in Britain came into contact with these children and it brought home to them the reality of war on the continent. With all of this in mind, answer the following: