Migrating home: 'mixed' children and the return of the nabobs of India 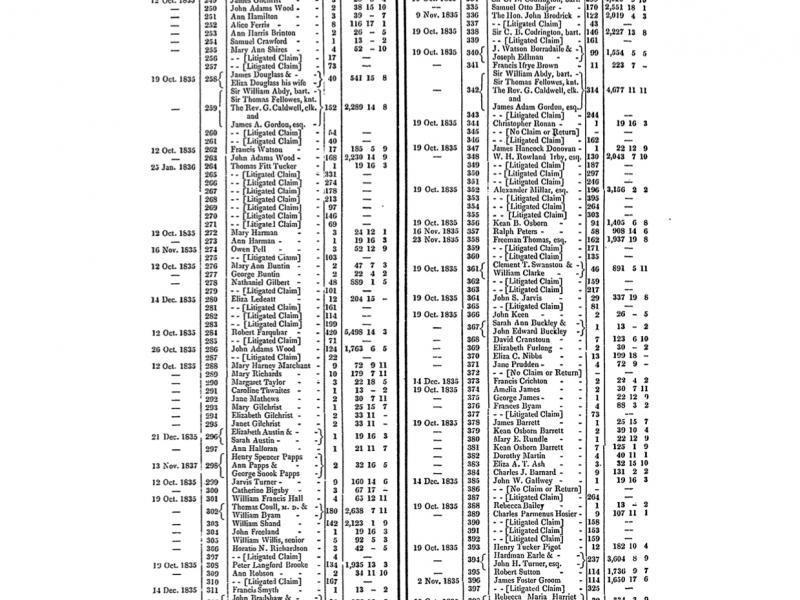 Britain's transatlantic colonies: the forced migration of Africans as slaves

The movement of people of African descent to Britain extends throughout history, but the patterns of such movement in the periods 1750–1900 and 1900–present can only be understood by reference to the history of the enslavement of Africans in Britain’s Caribbean colonies and the creation of an African diaspora in the Caribbean in the era of slavery. Britain's slave-trade in the 17th and 18th centuries involved the forced transfer of millions of captive Africans across the Atlantic to British colonies in the Caribbean – to Jamaica and Barbados, to the Leeward islands such as St Kitts, Antigua and Nevis, and to the Windward islands such as Grenada and St Vincent. These transfers created a new African-Caribbean population within the British Empire that later furnished many new migrants to Britain, especially after the Second World War, when  Britain turned to its former colonies for new workers in its manufacturing and transport industries. It is not possible to understand modern Britain, its population and communities without grappling with the era of slavery and its aftermath.

After periodic participation in the slave-trade in the 16th century, supplying the transatlantic colonies of other European powers with captive Africans from the west coast of the African continent, Britain began to establish its own transatlantic colonies with the foundation of Jamestown in what is now Virginia in the USA in 1607 and with the seizure and settlement of St Kitts, Nevis, Antigua and Barbados in the 1620s, and of Jamaica in 1655. In a second wave of expansion, in 1763, Britain seized St Vincent, Grenada, Tobago and Dominica from the French, and in a third and final wave it added Demerara, Essequibo and Berbice (which later together became British Guiana, now Guyana), Trinidad, St Lucia and in the Indian Ocean the Cape of Good Hope and Mauritius, all of which it took from Revolutionary and Napoleonic France and her Spanish and Dutch allies in the period between 1795 and 1815. In all these colonies Britain established or continued the building of slave societies, in which enslaved Africans constituted the bulk of the population ruled over by a small number of British elites. The main crops were tobacco in North America and sugar and rum, coffee, indigo (for dye) and mahogany in the Caribbean.

Freedom, war and migrations to Britain

From this enforced African diaspora in the Caribbean came at first hundreds of enslaved men, women and children in the company of their ‘owners’ as well as hundreds of formerly enslaved Africans who had been freed or purchased their own freedom. Some estimates indicate 20,000 people of African descent were in Britain by the middle of the 18th century, of whom more than half were probably in London. Then, after Britain's American colonies had rebelled against the British crown and broken away from Britain at the end of the American War of Independence of 1776-1783, several thousand more formerly enslaved people who had fought alongside the British came to Britain, many via Nova Scotia, where the defeated British had first carried these freed African-American loyalists. A number of formerly enslaved people such as Olaudah Equiano were active in the struggle against the slave-trade as writers and speakers in the 1780s and 1790s.

After 1772, enslaved men and women brought to Britain by their owners were free and could not be forced back to the Caribbean against their will, but if they did return there voluntarily they were re-enslaved. After campaigns from the late 1780s, Britain ended its own role in the slave-trade in 1807, but the institution of colonial slavery was left untouched. Only in 1833 did Parliament begin to free the 800,000 enslaved men, women and children in the British colonies.

After full Emancipation in 1838, there was continued smaller-scale movement for another 100 years from colonies across the British Caribbean to Britain, some by people who settled in Britain but much by those who stayed for a period and then returned to the Caribbean, typically seaman or students. In the late 19th and early 20th centuries many of the most academically able students, for whom there was no university in the British Caribbean, came to British universities and to other institutions that provided professional training in law and medicine.

When Britain abolished slavery in its colonies in the 1830s, it paid the slave-owners financial compensation. The enslaved people themselves received nothing. The document displayed above is part of a report to the House of Commons by the Commissioners appointed by the government to distribute £20 million [£17 billion today] which the Commissioners were asked to provide in 1838, to show where the money had gone. It shows some of the financial awards made in Antigua, and is one of about 300 pages in the report covering 19 separate colonies. The document provides the date, a unique claim number, name of the person to whom the compensation was awarded (who could be the owner or a creditor who had lent money and secured it on the enslaved people), the number of enslaved people covered by the award and the amount of money paid. The source also shows that some awardees were large-scale slave-owners, and some small; most were men but many were women. Some claims (‘Litigated Claims’) involved two or more people arguing about who should receive the money, for example an owner and a lender; a few claims (‘Remains for Adjudication’) were held up by lack of documentation.

This page and the others like it enable historians, for the first time, to find out who exactly owned enslaved people, and it has been possible to trace many of them. Altogether there were some 46,000 slave-owners; about 3,500 lived in Britain, a minority who nevertheless owned half the enslaved people and received half the compensation paid. Sometimes these slave-owners in Britain had living with them either children of mixed heritage (the children of slave-owners and either enslaved women or free women of colour in the Caribbean) or people of African descent who had come to Britain as domestic servants. The source gives us a better opportunity of finding such migrants, as well as identifying the slave-owners.

If you would like to find out more about the compensation British slave-owners received, the Legacies of British Slave-ownership database  includes all the records from the Slave Compensation Commission. It captures the slave-owners, not the enslaved people in the Caribbean and, under ‘Legacies’, sets out many individual physical, commercial and cultural legacies of slave-ownership in modern Britain.

The database highlights the coerced nature of some centrally important movements as well as the voluntary push and pull factors in migration. It reflects the nexus of state and private interests in the construction of a system of coercion, and the role of the state in designing a specific process to end or at least to modify that system. It raises questions about the limits to freedom, and the importance of economics in building and destroying the slave-system.

From the Register to life: Mary ‘Molly’ Prince

Slave Registers were censuses of the enslaved people taken every three years, to try to control the illegal movement of captive Africans after the end of the slave-trade in 1807. 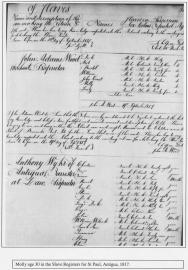 Image of Slave Register, Antigua, 1817. Courtesy of The National Archives (ref: T71/244 p. 314)
Owners had to register the enslaved by name and account for new people in their possession.  The register here is from Antigua in 1817.  The name ‘Molly’, shown next to 'John Adams Wood', is believed to refer to Mary Prince, a formerly enslaved woman who shared her personal experience of Caribbean slavery with the world in her memoir, The History of Mary Prince ('Molly' was the name she herself used: 'Mary Prince' was the name given to her by the London abolitionists). Mary Prince’s narrative is one of the only accounts of British colonial slavery by an enslaved woman. It was recorded from conversations with her and published in 1831 in London by abolitionist activists to assist the effort to abolish slavery.

John Adams Wood appears in the Legacies of Slave-ownership database (Claims nos. 246, 250, 263, 286 and 315). He brought Mary Prince to Britain. Mary Prince’s story tells of her life and hardships as she was moved across the Atlantic world of slavery, and of her time (1828-1830) in London, where she left the house of John Adams Wood in light of the mistreatment she experienced. She wanted to return to Antigua where she had a husband, but she would have been re-enslaved had she gone. Her situation became a celebrated case in London, polarising the abolitionist and anti-abolitionist camps. John Adams Wood refused to agree to release her so that she could return as a free woman to Antigua. After her appearance in two libel trials in 1832 connected to the publication of her story, Mary disappears from the records: her subsequent life remains unknown.

Mary Prince (1831), The History of Mary Prince: A West Indian Slave Related by Herself with a Supplement by the Editor to Which Is Added the Narrative of Asa-Asa, a Captured African – available as an ebook

Written by Dr Nicholas Draper, Director of the Centre for the Study of the Legacies of British Slave-ownership, University College London

Using the Legacies of British Slave-ownership database, you can search for people by name and by place to find out whether there were any people involved in the slave trade who lived near your school or your home.

The database allows us to understand the nature of the slave-system at the very moment it was extinguished and to look both backwards to the two centuries of slavery and forward to 20th century migrations. The source also allows you to explore the local dimension of the system of slavery, to discover in many cases its immediacy and in others its absence, and to debate its significance and long-term impact locally and nationally.