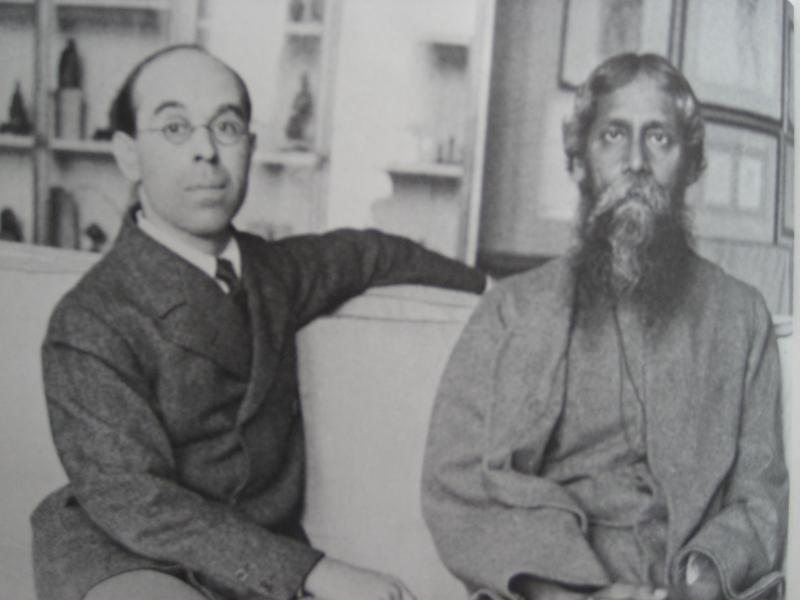 This photograph, and the moment it documents, came about as a result of the Jewish art critic and portraitist William Rothenstein’s (1872–1945) travel to India for artistic purposes in 1910. Rothenstein sits here posed next to the Bengali poet and Nobel Prize winner Rabindranath Tagore (1861–1941). In the photograph, we immediately notice the modern floor-to-ceiling shelving behind the men, displaying a tasteful arrangement of small sculptures and other art objects, some with a Buddha-like aspect. We also see how Tagore, the visitor, looks the more comfortably settled against the back of the sofa than his host. From other photographs taken on the same occasion, we know that Rothenstein changed places with his children, while Tagore, the honoured guest and primary subject, was allowed to keep the same position. At the time the photograph was taken Tagore was about to embark on one of the most successful and concentrated publicity campaigns in modern literary history, piloted by the man on his right.

The Bengali poet Rabindranath Tagore first came to Britain as a student in 1878 and attended lectures in law at University College, London. He then spent many years travelling between colonial India and metropolitan Britain, and so provided an important example of successful East/West cultural crossing in the late nineteenth/early twentieth century. Tagore was a much-feted poet and artist in England; in particular, the Jewish art critic and portraitist William Rothenstein befriended him and promoted his work, as did the leading modernist poets William Butler Yeats and Ezra Pound. In 1912, his book Gitanjali  (‘Song-Offerings’), featuring an introduction by Yeats, was published by the India Society of London (after having been translated by Tagore himself from Bengali to English). The following year he received the Nobel Prize for Literature, the first time this honour was bestowed on an Asian writer – indeed, Tagore was the first non-white person to receive the prize. After this, Tagore toured the world and became an international literary celebrity. With his cross-cultural appeal, he became an inspiring figure to many in this early period of  Indian migration to the West.

The India Society in London

The artist and critic William Rothenstein first met Tagore in Calcutta and made a famous set of portrait drawings of him, commenting: ‘I discerned an inner charm as well as great physical beauty, which I tried to set down with my pencil’. Earlier that year, Rothenstein, in collaboration with various Britons and Indians in the art world, had established the India Society with the aim of widening public understanding of Indian painting, sculpture and music. The Society was keen to reject claims by Sir George Birdwood, then exhibitions organiser for the India Office, that Indian religious objects could not be regarded as fine art. Though the Society was designed to be non-political, at a time of rising nationalism in India, it nonetheless opened within London a significant arena for intercultural Indian/British contact, where discussions about Indian culture might be held on more equal terms than had existed before.

Rothenstein, perhaps due to his Jewish background, was more welcoming and understanding of Tagore’s work than many other figures in Britain at the time (including Yeats and Pound, who eventually distanced themselves from what they called Tagore’s ‘traditionalism’). Indeed, the photograph above was taken in Rothenstein’s Hampstead home. In early July 1912, Rothenstein had invited Tagore as the honoured guest in a large gathering of friends and acquaintances. The occasion was marked by several photographs taken by John Trevor in Rothenstein’s drawing room, all of which are marked by an unusual and therefore inspiring closeness and trust.

The photograph above captures in microcosm the dynamic and friendly relations that formed between certain British and Indian artists in London in the late Victorian and Edwardian periods – relations that would be important for the many other Indian teachers, politicians, activists, seers and students who also travelled to and lived in London at this time, as part of the early period of Indian migration to Britain. Alongside the British/Indian poetic collaborations of Manmohan Ghose and Lawrence Binyon, and Indian-English writers Sarojini Naidu and Cornelia Sorabji (see: 'Student migrants'), it helps us to recognise not only the presence of Indian travellers and migrants in Britain in this pre-war period but also their cultural contributions to British life.

Indian migration to Britain is typically discussed in terms of post-1945 history. However, the photograph in the main source demonstrates the cross-cultural interactions of an earlier period, standing in contrast to the racial tensions often associated with much of the postwar era.