Jewish immigration and the Aliens Act 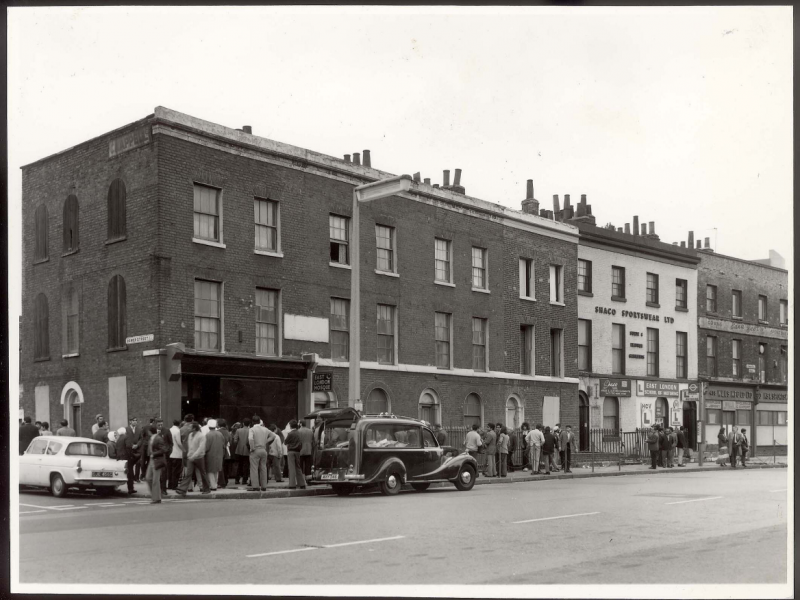 This is a photograph of the three houses bought by the London Mosque Fund in 1941 at a cost of £2,800 and converted into a mosque. The buildings also housed a mortuary to accommodate the needs of the growing local Muslim community. As the presence of a hearse together with the crowd outside the mosque suggests, a funeral was about to take place. The hearse appears to be a 1950s model while the car could be from the 1960s. Those gathered for the funeral are all men and most of them would have been of South Asian heritage. No Muslim women are to be seen as traditionally they would not have participated in public funerary rituals.

What this source reveals is that the first mainstream mosque in London was not ‘purpose-built’; nor was it situated in the heart of the British Empire's thriving capital city. Instead it was located in a grim-looking working-class neighbourhood in London’s East End. While not showing any outward signs of decay, the building was considered sufficiently run-down by the Greater London Council (GLC) for it to acquire the building in 1969 through a compulsory purchase order for demolition and re-development for social housing. In 1975, the mosque was moved from Commercial Road to a pre-fabricated structure in Fieldgate Street.

For historians, this picture raises a number of interesting questions. Why – after decades of effort to build a mosque ‘worthy of the capital of the British Empire’ – was the decision made to establish a mosque in the East End of London and not elsewhere? Rather than constructing a proper mosque why was it only possible to acquire a dilapidated building?

The East London Mosque was established in premises in Commercial Road (London Borough of Tower Hamlets) in August 1941 – right in the middle of the Second World War. The campaign to secure funding for a mosque in London had begun decades before, in 1910, when the London Mosque Fund (LMF) was inaugurated by leading Indian Muslims, including member of the Privy Council, Syed Ameer Ali, and the Aga Khan at a public meeting held at the Ritz Hotel. The fund received donations of £1,000 each from the Ottoman Sultan and the Shah of Persia and, although the LMF had grown to a sizeable amount by 1926, it was still not nearly enough for the construction of a mosque seen as fitting in the eyes of its funders.

During the 1930s, as the community of more permanently settled Muslims grew in the East End of London, the need for a local religious space was brought into increasingly sharper focus. The minds of the trustees of the LMF were further concentrated by the demand of the newly founded Jamiat-ul-Muslim, a local community organisation, for the building of a mosque. The LMF funders first agreed to support the costs of ‘a Muslim Preacher and Prayer Room’ in rented premises and then released sufficient money to purchase suitable property. It was, however, only in the 1940s, when a significant population of Muslim migrants, in particular from South Asia, were arriving and settling in this part of London, that a mosque was finally set up. These wartime migrants from South Asia and other parts of the British Empire were pioneers for the later, larger movements and settlement of Muslims in the East End that took place from the early 1960s onwards. 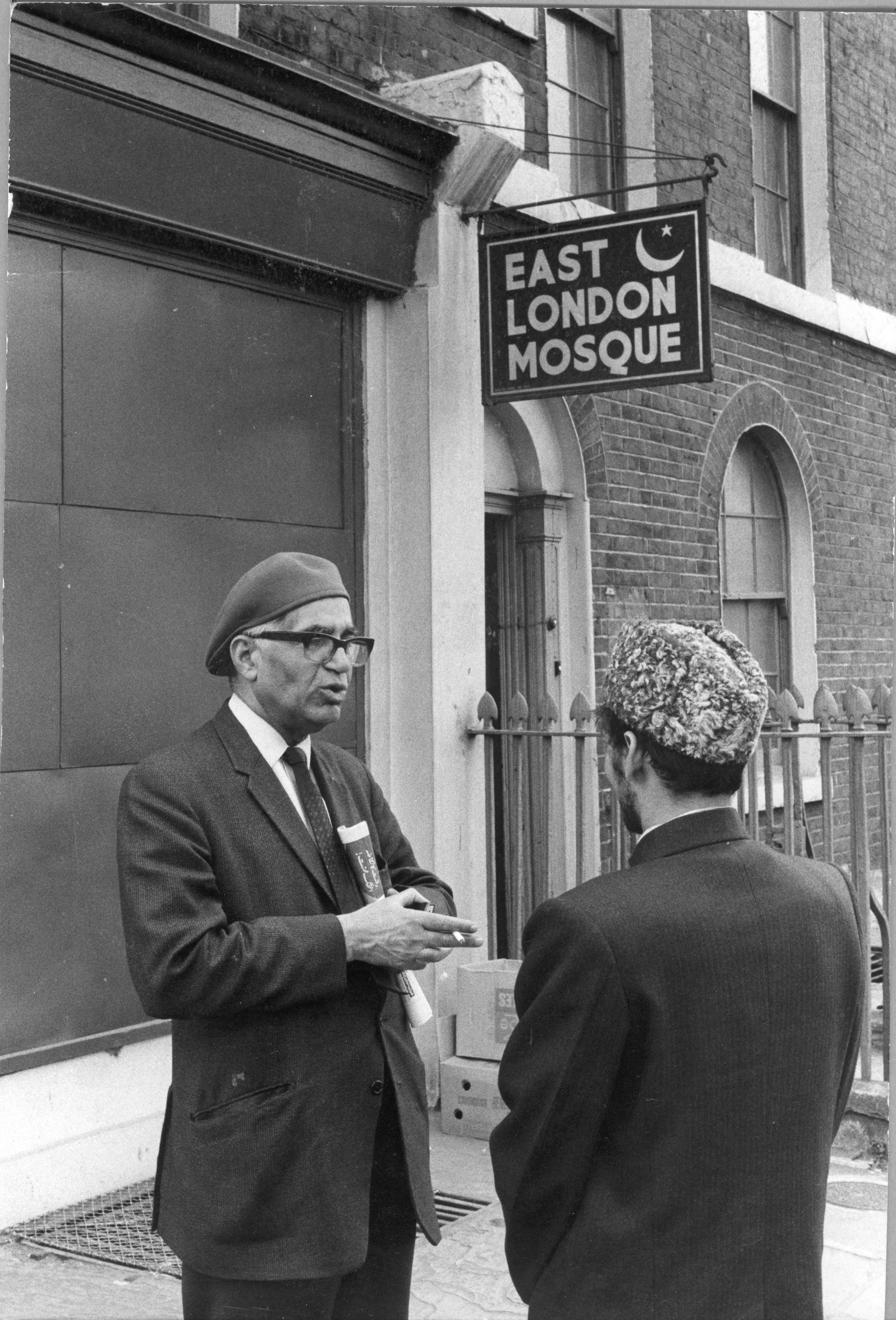 From Pakistan and Bangladesh to London's East End

As the British economy picked up after the Great Depression in the early 1930s, the lure of London as one of the world’s most important port cities became stronger, and 'jumping ship' by sailors, including many from different parts of the British Empire, increased steadily (see: 'The lascars'). After the Second World War, after many years of this activity, a sizeable Muslim community existed in Britain. In the years between Indian independence in 1947 and the 1950s, the Muslim community in London’s East End expanded further. The vast majority of Muslims who arrived in the capital came from East Pakistan (which would change its name to ‘Bangladesh’ after its independence from Pakistan in 1971). They tended to settle in the East End of London having moved to Britain to escape the suffering caused by the Indian independence process – in particular the decision, called 'Partition', to divide British India into two states, India and Pakistan, in 1947.

A combination of push and pull factors in the 1950s and 1960s – including the deteriorating political situation in Pakistan, the threat of tougher British immigration controls, and the continuing availability of economic opportunities in the UK  – meant that substantial numbers of migrants from Pakistan began to arrive and settle in Britain. They were soon joined by their families and friends, and community organisations emerged to meet these migrants' social, cultural and religious needs. These organisations included the Pakistan Caterers' Association, formed in 1960, whose leaders owned restaurants, cafes, corner shops and funeral parlours. Many of these caterers were also active in local religious and welfare organisations, such as the Jamiat-ul-Muslimin, the Indigent Muslim Burial Fund, and the East London Mosque.

When bloody civil war finally broke out in East Pakistan in 1971 and created Bangladesh, it produced further political uncertainty and economic turmoil.  Consequently, the volume of migrants to Britain from this region, both educated and illiterate/semi-literate, rose sharply, as did the associated flow of their dependents.

Racism in East London and the local Muslim response

As these new Londoners put down local roots, they faced resentment, hostility and racial discrimination from the wider white society and its institutions. The scale of migration from Bangladesh from 1971 led to considerable demands being made on East End schools, health and welfare services. In the process, a gulf developed between white residents and Bangladeshis over housing, education and employment. Bangladeshis became concentrated in the local garment industry, catering trade, and small shop-keeping sector and their lifestyles contrasted sharply with those of other residents. Often viewed as a threat, people of South Asian origins in Tower Hamlets found themselves increasingly targeted by aggressive young white men, and anti-immigration marches through the East End periodically turned into violent assaults.

The East London Mosque became, arguably, one of the most visible symbols of the presence of these migrants and was periodically vandalised by local racist groups. The police's indifferent response, their apparent lack of sympathy for the plight of local Muslims, and their inability to deal effectively with racial crime, created frustration and resentment. What caused deterioration in relations between these communities and local and national institutions was these institutions' apparent lack of willingness to treat Muslim residents' concerns in ways that would generate trust between the different people living in the East End.

As attacks on migrants now living in this part of London increased, community leaders struggled to develop an effective strategy to address local concerns. While they continued to work with representatives of the police, the Church and other relevant institutions, little improvement occurred so that eventually, independent community action began. Street patrols were formed, which supported the Anti-Nazi League in organising their self-defence. They also organised protest rallies and demonstrations, demanding action from the government.

Given the perception within the East End Pakistani/Bangladeshi Muslim community that its members could not depend on wider institutions to fairly respond to their concerns, they decided to form community organisations that would represent them more robustly and effectively. In this process, a number of policy developments at the governmental level proved helpful. In order to regenerate the East End’s declining economy and to improve the environmental and housing conditions, and in recognition of its unique needs, Bangladeshi pressure groups were now allocated resources. Government-funded centres helped Bangladeshis in respect of housing, education, employment, health, women's rights, recreation and community.  Consequently, the number of Bangladeshi voluntary groups expanded quickly in the 1970s and 1980s. 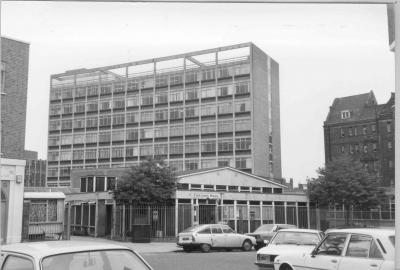 From the 1980s onwards, as families settled in the UK on a more permanent basis, Muslim communities became more anxious about the long-term fate of their cultures, traditions and values. More specifically, they wanted to create the best possible conditions for practising their faith as they understood it; they also wanted to ensure that it would survive by being effectively passed on to future generations. With further growth and consolidation of the Bangladeshi migrant community, bodies with a distinct Muslim identity (including, Jamiat-ul-Muslimin, Pakistan Welfare Association; Pakistan Caterers’ Association; Islamic Foundation; Bangladesh Welfare Association; Kobi Nazrul Centre) were able to gather substantial resources through contributions from individuals and groups which, in turn, enabled them to grow and become firmly established.

While the Mosque was able to negotiate compensation of around £200,000 from the GLC and to accumulate some £700,000–£800,000 through individual donations from local congregants, it was the generous donations from the Middle East, wealthy Muslims and, in particular, £1.1 million from King Fahad of Saudi Arabia, which enabled the achievement of the required funding of £2 million for the completion of the new building. A new purpose-built East London Mosque, inaugurated on 4 July 1985, thus emerged in this changing context as one of the more influential institutions associated with this community. Initially it could accommodate about 2,000 congregants. With expansion its capacity has increased to around 7,000. 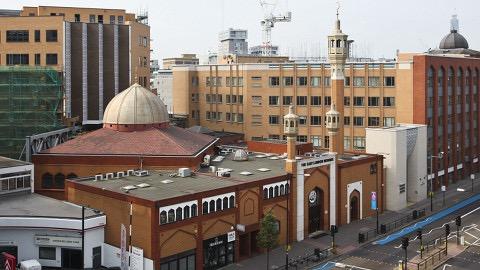 As seen in the picture, this mosque was of a more traditional shape than its predecessor and built on a far larger scale. In the many years since its establishment, this new mosque, located on Whitechapel Road, has emerged as one of the more influential institutions in the community. The struggles to establish a mosque of its size were many, and the building now stands as evidence of that effort and as a symbol of the many years of presence of Muslim Britons in the East End.