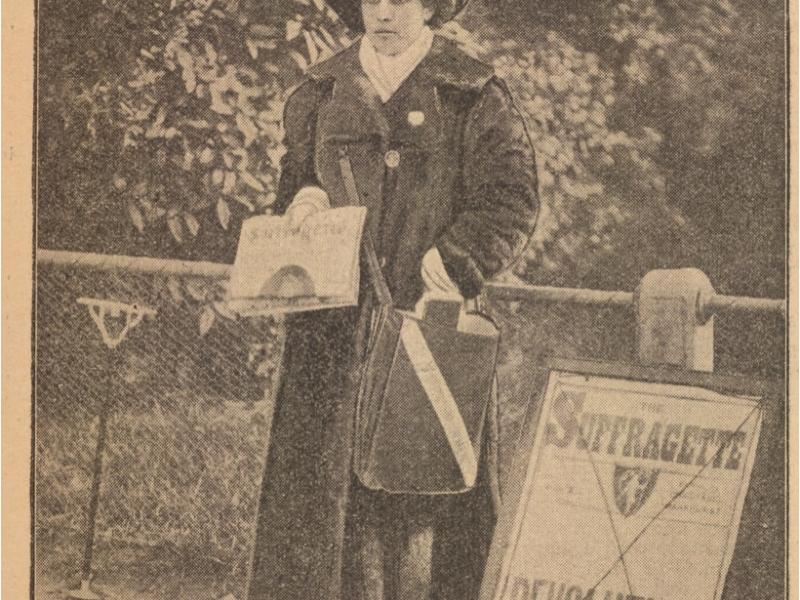 This image of Queen Victoria’s god-daughter, Sophia Duleep Singh comes from the British Library’s archive collections, and dates back to 1913. In it, Sophia is distributing copies of The Suffragette, the newspaper of the early twentieth-century suffragette movement for the rights of women of Britain.

The photo belongs to the Indian Office Records, a vast collection of documents that relate to the British administration of India, 1600 to 1947. These types of collections, and the documents they contain, are evidence of the way historical individuals and organisations thought and behaved. This archival material, therefore, preserves history, yet also reveals hidden details, perspectives and paradoxes of the past. Archives can be surprising and enlightening, taking a number of forms, including letters, maps, and, as shown here, images.

This particular image of Sophia Duleep Singh gives us some insight into and invites some questions about an often forgotten group of wealthy migrants from India who settled in Britain during Queen Victoria’s reign.

South Asians have been migrating to Britain for four centuries. This is due to a number of factors. They include push and pull elements such as trade, commerce and education. Around the mid-nineteenth century, after Queen Victoria's 1858 Proclamation, more South Asians began to travel to Britain and settle. Victoria’s proclamation was a milestone as it declared for the first time that the British Monarch would govern India. Following this, links between India and Britain were further cemented; so too were the migration routes between the two places.

A range of different classes and groups migrated to Britain through these years. They included ayahs, lascars, students, writer-travellers, politicians and intellectuals, as well as those who had royal or aristocratic links (See also: 'The lascars', 'The first Indian MP', 'Student migrants', 'A home for the ayahs' and 'The Arts across continents'). These migrants travelled from all over British India. British India was a large, expansive place then, different from what we know India to be today. It once encompassed the modern nations of Bangladesh, Pakistan, Sri Lanka, Nepal, as well as India, and was united until its partition in 1947, which created a number of modern South Asian nations.

The family of Duleep Singh

Sophia Duleep Singh (1876-1948) was the daughter of Duleep Singh, Maharaja of Punjab until 1849. In 1849, aged 10, he was removed from the Punjab, with his title and power devolved. Despite this, Duleep Singh was famously a friend of Queen Victoria. In her diary she wrote of him:

‘He has been carefully brought up, chiefly in the hills, and was baptised last year, so that he is a Christian. He is extremely handsome and speaks English perfectly, and has a pretty, graceful and dignified manner. He was beautifully dressed and covered with diamonds. The Koh-i-Noor [diamond] belonged to him and was once worn by him. I always feel so much for these poor deposed Indian princes.’

Converting to Christianity in 1853, The Maharaja eventually settled in the UK in 1854 and became a naturalised British citizen. In 1864 Duleep Singh married Sophia’s mother, Bamba Müller – a woman of German and Egyptian descent – in Cairo, eventually settling his family at Elveden Hall in Suffolk. Duleep Singh transformed Elveden Hall by refashioning part of it into something of an Indian palace reminiscent of his childhood. He also presented himself as an English socialite, he and his wife hosting regular parties and receptions together. Singh and Müller would go on to have eight children, including Sophia who was born in Britain in 1876.

Sophia was god-daughter to Queen Victoria and one of her favourites. She was raised according to her birth as an aristocrat, albeit an English aristocrat with a mixed-heritage background. Indeed, Queen Victoria presented her at court and provided Sophia with grace and favour lodgings at Hampton Court Palace. The Princess was often also featured in society pages wearing the latest fashions.

Anita Anand’s book Sophia: Princess, Suffragette, Revolutionary paints a lively picture of Sophia’s life. According to Anand, Sophia travelled to India in secret as a young woman and this experience changed her. She returned to England as a radical, beginning a life-long battle to bring about social justice and equality in her country. Sophia not only became involved in battles for women's rights, but also fought tirelessly for Indian independence, supported the cause of destitute lascars, and provided funds and clothing for Indian soldiers during the First World War. As someone with royal connections, Sophia was not exceptional, as other migrants like her existed, but at this time there were far more migrants from more humble origins.

In the picture above, Sophia is shown selling The Suffragette outside her lodgings at Hampton Court Palace. The suffragette movement, in the late-nineteenth and early-twentieth century, was a landmark UK protest calling for the political rights – including the right to vote – of women. Sophia was a high-profile suffragette activist, joining the Women's Social and Political Union and becoming an energetic campaigner. She took part in ‘Black Friday’ (18 November 1910), with Emmeline Pankhurst, Elizabeth Garrett Anderson and others, and also joined the Tax Resistance League.

Sophia, being of noble birth, and god-daughter to Queen Victoria, enjoyed many privileges. However, there is evidence to suggest that her activism was not well-received by the authorities of her time. A letter in the Indian Office Records shows how British government officials sought ways to ‘stop her’. In the letter, it is discussed how an eviction may be possible, to remove Sophia from ‘the lodging she now enjoys in Hampton Court by his Majesty’s favour’.

As a mixed-heritage, migrant woman of aristocratic upbringing, Sophia was politically and socially active in Britain. She worked tirelessly for justice and reform, in particular for women, but also for fellow migrants. Her high-profile activism had great impact during her time; and it continues to resonate in the rights and equalities we enjoy today in Britain.

The story of Sophia exposes the forgotten history of how Indians have influenced and contributed to Britain. It reminds us of the interwoven histories of India and Britain, and the long presence of Indians, from all backgrounds, in the British Isles.

The source represented here is from research undertaken at The Open University by the 'Making Britain' project. The project produced an online database of information about South Asians in Britain from 1870 to 1950, the organisations they were involved in, their British connections, and the major events in which they participated. It contains its own entry on Sophia Duleep Singh.

The British Library has also produced'Asians in Britain' a digital learning resource.

Germanophobia and World War I