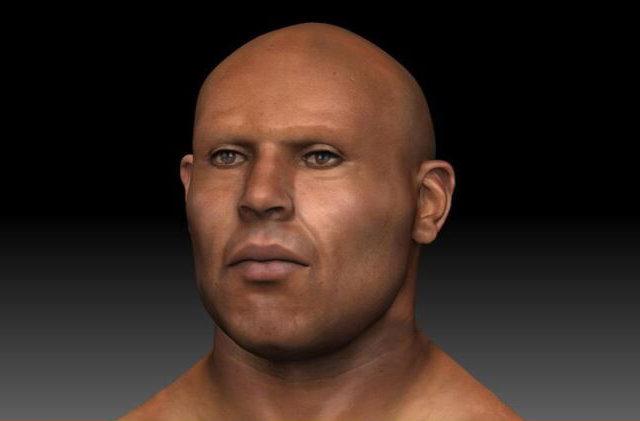 A facial reconstruction of 'The Ipswich Man', created by Professor Wilkinson's team at the Liverpool School of Art and Design
Show source description

This image is a facial reconstruction of the bones of an African man, dubbed 'The Ipswich Man', found in Suffolk.

The reconstruction was created by the team of Professor Caroline Wilkinson at Liverpool School of Art and Design from skeletal investigations by Dame Professor Sue Black at Dundee University for the first episode of the BBC programme History Cold Case.

Although we have reason to believe his face-shape is correct, we do not know the Ipswich Man's skin pigmentation – he could have been much darker – or much lighter-skinned than this.

The ‘Ipswich Man’ is the name given to the skeleton of a man found in Ipswich, Suffolk and made the subject of a BBC documentary called History Cold Case. This skeleton was discovered during a series of archeological digs carried out from 1993-2006 within the cemetery of the Greyfriars monastery in Ipswich, Suffolk. The Ipswich Man had been buried there between 1258 and 1300 and through forensic investigation by Professor Sue Black at the University of Dundee, he was found to have direct African ancestry. This finding challenges the popular idea that the first people of African descent arrived in Britain in the mid-twentieth century.

How do we know the Ipswich Man was from Africa?

Dame Professor Sue Black Sue Black is one of the leading forensic anthropologists in her field and her research team at the Centre for Anatomy and Human Identification (CAHID) work with organizations such as the United Nations, the police and the intelligence services. They have conducted forensic research all over the world including in many African countries and have studied local differences in chromosomes and the effects that climate and diet have on teeth, bone density and bone structure.

Why was the Ipswich Man in England?

It is likely that the Ipswich Man came from modern-day Tunis in North Africa. This is for a number of reasons. Firstly, the Greyfriars monastery where the Ipswich man was buried was built by Robert Tiptoft. Tiptoft was a colleague of Richard de Clare and both men went on a Crusade together in 1270. Payments for their activities during the Crusades are recorded in the Pipe Rolls (papers written in Latin recording expenditure). And in the Flores Historiarum, a medieval history, it states De Clare brought ‘four captive Saracens’ with him to England from Tunis in 1272. It may be that the Ipswich Man was one of those four because of De Clare and Tiptoft’s relationship.

From scientific investigations of the Ipswich Man’s bones we can conclude that he died from a spinal abscess that by the latter end of his life would have seriously incapacitated his movement. It is likely during those last years that he was cared for at the Greyfriars monastery. The Ipswich Man was buried in the grounds of the friary in a single grave. Historical research tells us that a poor man or slave was unlikely to have been buried in this way, and, due to his grave’s location inside the cemetery, it is probable that the Ipswich Man was a Christian at the time of his death, and even connected to the friary. This is because Pope Innocent IV had stated that only ‘friars and those of their families’, could be buried in cemeteries organised by the Greyfriars.

The story of the Ipswich Man shows how forensic science and history can work together to reveal the past.  Using scientific methods and medieval documents, we have been able to reconstruct a narrative that explains the Ipswich Man’s migration to England. However there are still some things that we do not know. Was the Ipswich Man at first a captive who later converted to Christianity, and altered his status?  Did he start a family in England or did he bring family members here from where he was from? Notwithstanding these unanswered questions, the Ipswich Man gives students an opportunity to visit the place where he was buried in Suffolk and consider a few questions:

Students might also watch the BBC programme History Cold Case on the Ipswich man and answer another question:

Poems of protest: Meir ben Elijah and the Jewish people of early Britain