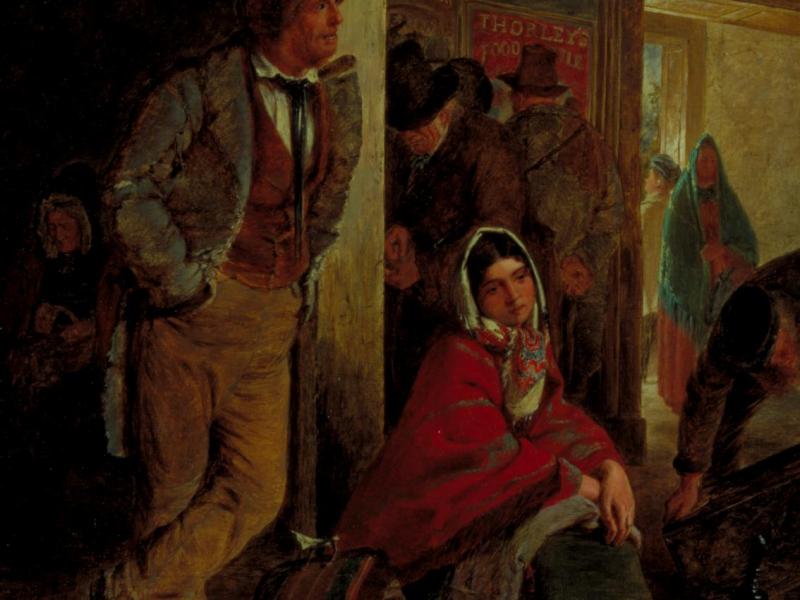 'The Emigrants' by Erskine Nicol, 1864 (Courtesy of The Tate)
Show source description

This picture shows Irish emigrants at Ballinasloe station on their way to Galway to board boats to America. This is one of a number of paintings on the very topical subject of emigration which appeared at public exhibitions around this time. They were intended to draw attention to the plight of the poor, and also to provoke a charitable response in the spectator. Erskine Nicol was born in Scotland but established his reputation painting Irish subjects.

(Source information: the image is provided courtesy of The Tate under Creative Commons licence and can be found here)

Many of the concerns we hear voiced about immigration today were also aired against Irish immigrants in early industrial Britain. Fears of swamping, religious antipathy, negative political impacts, job competition, and vague ideas of cultural degeneration were evidenced in the way increasingly large waves of Irish immigrants were viewed in the ‘Condition of England’ crisis of the 1830s and 1840s.

As in modern times, numbers were seen as a major source of fear. In 1861, in the generation after the Great Famine (1845–52), the Irish-born in England and Wales reached a then high point as hunger, disease, deprivation and diminishing opportunities at home contrasted with the employment prospects available in Britain. At this point, in 1861, there were over 800,000 Irish-born in Britain; more than twice that number if we count children. Immigration also heaped into regional and national clusters. The proportion of Irish-born people in Scotland was always higher than in England and Wales. In the latter, the percentage figure never reached higher than three per cent; in Scotland, the figure never dropped that low, regularly standing at two or three times the rate for England and Wales. Such rates of migration are explained partly by distance (only 13 miles separated Northern Ireland and Scotland at the closest point); but population flow also was clearly encouraged by the concentrations of mining and heavy industry in the parts of western Scotland closest to Irish ports. Moreover, high rates of out-migration from Scotland (one of Europe’s principal sending nations) created further opportunities for Irish labour.

In the mid twentieth century, the absolute numbers of Irish in England and Wales became larger than they had been for a century. However, the marginal and often poverty-stricken nature of the nineteenth-century Irish communities made them more commented upon than was later the case. In this sense, perception was perhaps more important than reality.

At the turn of the nineteenth century migration patterns long established between Irish and British ports were beginning to solidify as growing industrial towns attracted increasing waves of Irish. One of the earliest permanent industrial settlements began to emerge in this period in western and central Scotland within the growing textile industries. Most of these early settlers were Protestant weavers from Ulster.

In other industries, such as coal and iron, an Irish presence was also building up, though there is some debate, and little clarity, about the position that the Irish achieved in the labour hierarchy of the coalmines. The coal industry, despite its characteristics of hard and dangerous labour, did not offer a universal or regular experience for the incoming migrants. In the north-east of England, where complicated employer/worker relations lasted until the mid-nineteenth century, and where workers struggled to control access to pit-work, Irish labour struggled to achieve a foothold in better-paid face work.

The pre-Famine Irish generally demonstrated more subtle variations of skill and enterprise. There were far more skilled workers among them than has been acknowledged in history writing focused on the poverty and wretchedness of the poor Irish. According to Samuel Holme, a prominent local builder in Liverpool, one-fifth of the Irish laboured in the poorest trades, while one-tenth of them were mechanics, a craft occupation noted for high skill and wages and strong worker organisation. Even in Liverpool – home of the archetypal Irish slums – the ethnic workforce was varied. Irish labour in Manchester dominated the poorer aspects of the building trades, though migrants were also well represented as bricklayers and masons, as was common elsewhere. Once the Irish were established in these trades, moreover, they, like Durham miners or Clydeside shipwrights, fought to exclude all but their own kind from entry. While employers viewed Irish labour favourably, they also noted the tendency of the Irish to down tools in order to gain redress.

So, prior to the Great Famine, the Irish in Britain were found in hard work, dirty types of labour, and in general unskilled work, such as building, canal cutting, and outwork in textiles (carding wool, etc). There also were noticeable clusters of skilled Irish: carpenters, joiners, engineers, mechanics, etc. Some were small traders and street hawkers, others were master craftsmen. Before the Famine, their work profile was more varied than it would be after the Famine.

George Cornewall Lewis’s survey of the Irish community, published in 1836, offered a detailed response to the dominant perceptions of the Irish in Britain. Lewis’s report presented the findings of his whistle-stop tour of the hotspots of Irish settlement. The report was a sub-element of Archbishop Whateley’s huge investigation of poverty in Ireland. Forming an appendix to the report of the Commission of Investigation into Irish Poverty, Lewis’s work was an important element, addressing the effects of Irish workers in Britain.

The Commission of Investigation for Irish Poverty was put in place by the government of the day to check the need for an Irish Poor Law to match that which had been introduced in England (the Poor Law Amendment Act, 1838). This was to be a system of indoor poor relief, massive poor-house building programmes and minimization of casualised outdoor relief. It was a false hope both for a modern society like Britain and a country of deep-rooted, generalised poverty, such as Ireland. An Irish Poor Law Act was passed in 1838, but not on the basis of Whateley or Lewis’ work. The government wished to speed up the process of investigating and reporting and so replaced the Commission with a hasty investigation and report by Sir George Nicholls.

Lewis’s report received wide press coverage in England, but his uncertainty about the usefulness of an Irish Poor Law in stopping the flow of Irish migration, was not realised. The Commission to which he reported had been by-passed; the politicians whom he may have sought to influence were presented with a different report on which the Irish Poor Law was based. Lewis is, however, vital to historians. Lewis’s report on Irish life in the industrial north of Britain came as close to an even-handed treatment of the Irish as anyone had done, though even here the appendices are loaded with the prejudice and antipathy of petty provincial office-holders and employers, which Lewis tried to reduce. Lewis's report is the most comprehensive study of its kind, and the first. It is a great piece of investigative sociology.

Lewis’s report drew upon a large body of conflicting evidence regarding the effects of Irish settlement. Parish beadles and social commentators poured scorn on the morals of the Irish and denounced their economic impact upon native labour. Employers and Catholic priests offered a feeble corrective by stressing the willingness of the Irish to do work that other groups refused. British labourers, seldom heard but whose actions could often be felt, concerned themselves less with moral questions than with economic arguments.  Fears that the Irish might undercut wages led to physical violence and prejudiced work practices. Despite perceptions, however, there is very little evidence of the Irish reducing wages; instead, it is more likely they operated in specific parts of an ethnically segmented workforce. 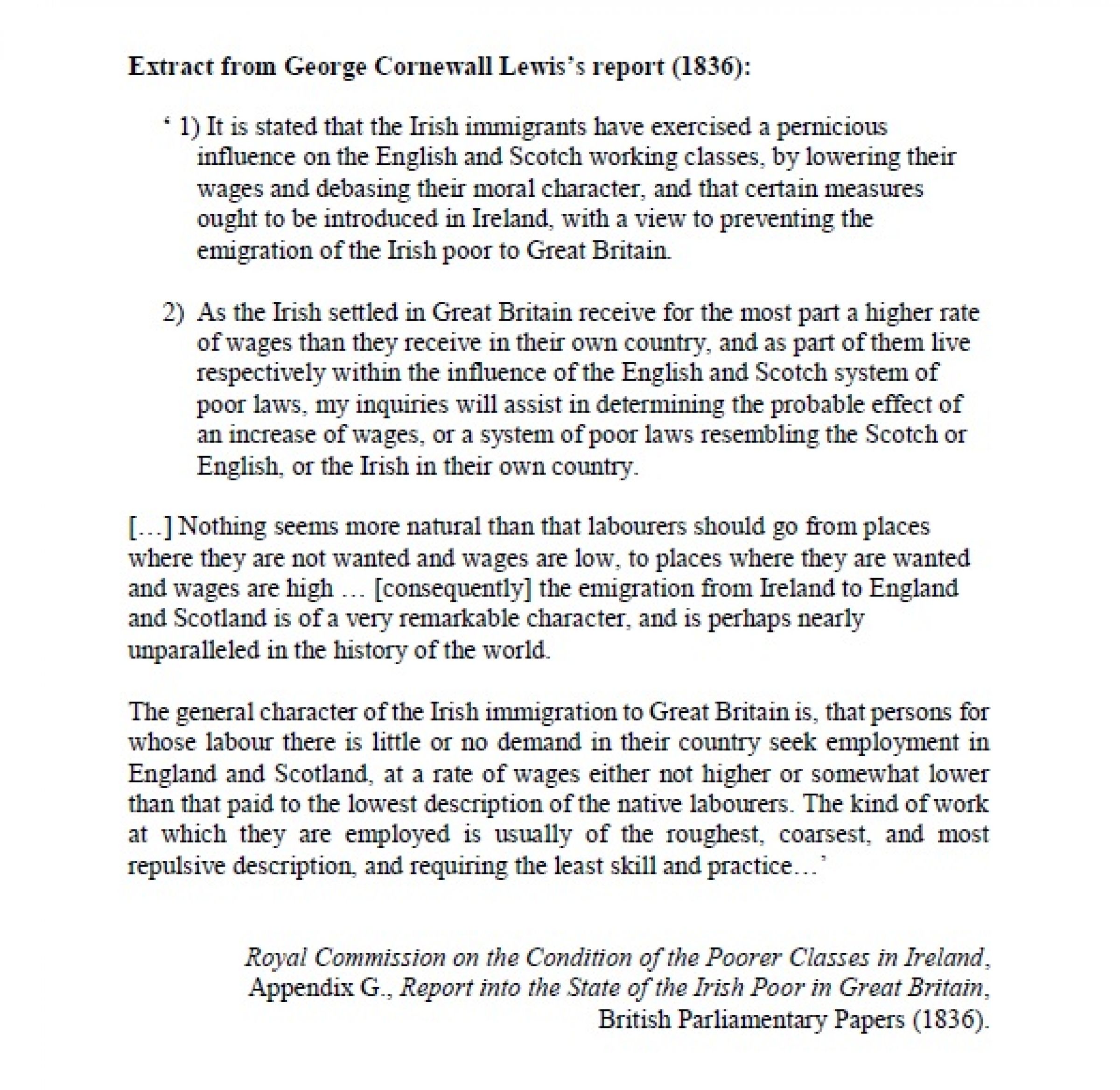 On the other hand, Lewis’s report contains quite a bit from employers who liked Irish labour, and who characterised the Irish as cheap, flexible, and quick to learn. For every employer who said negative things about Irish labour (for example, that they were ring-leaders in trade unions, lazy, primitive) there was one employer who said positive things, for example, that the Irish took up work the British didn’t want, and so were useful. Their overall effect was marginal to labour costs and pay, despite native workers claiming otherwise. The extract below is a good example from Lewis's report of a more positive employer response to Irish labour: 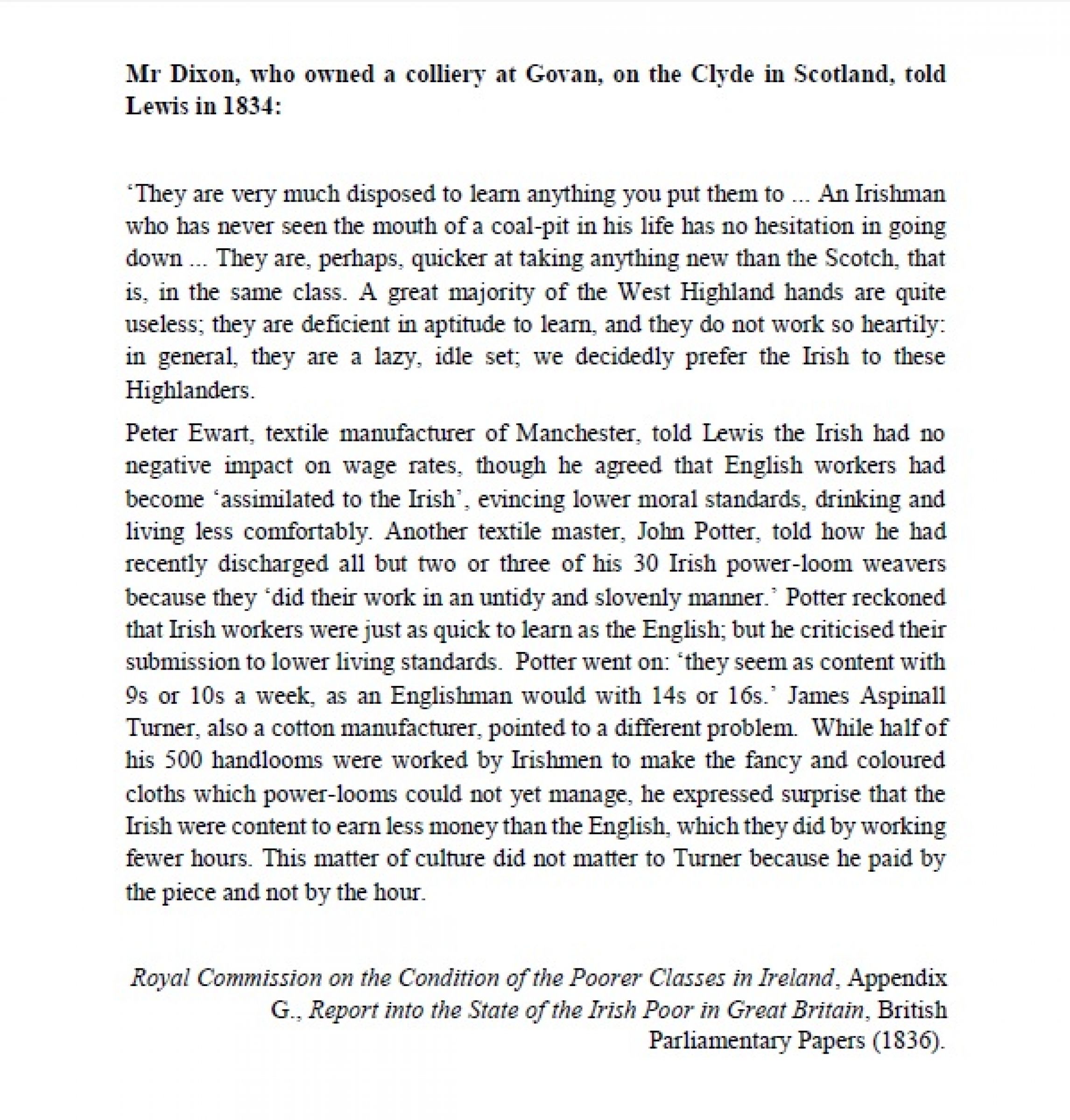 PDF of Mr Dixon's comments from George Cornewall Lewis's 'Report into the State of the Irish Poor in Britain' (1836).

The original version of Lewis's full report can be found here.

Demonstrably harsher views about the Irish community in Britain were expressed in the 1830s and 1840s by writers such as Friedrich Engels, who portrayed the Irish as a hard-pressed population of unskilled workers, undercutting wages, harming British morality and languishing in an urban decay.

Engels, the life-long collaborator of Karl Marx, was the wealthy son of a German manufacturer. His father had a factory in Manchester. Engels's book The Condition of the Working Class in England was first published in German in 1845. It had limited impact in England as a social commentary but it was part of a wider assessment of the socio-economic and political condition of the working classes in an age of unrest, with Chartism potentially threatening the status quo. The Irish were considered in Engels's writing as a divisive element that reduced the potentials of the English working class: 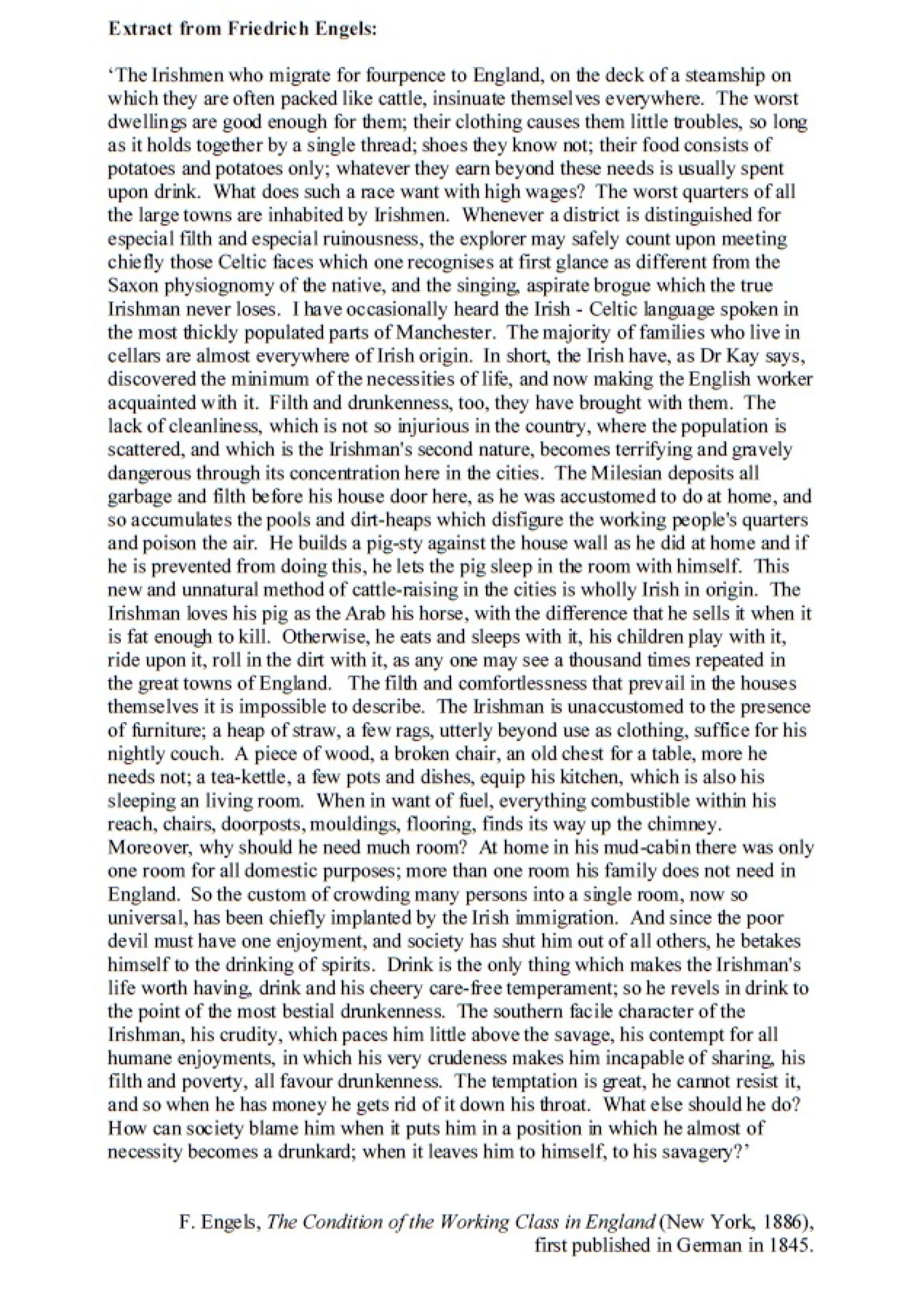 The Irish in Britain: a diverse migrant population

In reality, the Irish were a far more varied and diverse migrant population than the classic texts like Engels’s account (above) would have us believe. They did come to occupy jobs in well-paid occupations and were not simply restricted to the worst sorts of labouring works on docks, in tanneries, chemicals works, or in construction—although such jobs were important for the unskilled element that was most numerous among them.

Irish migration was fundamentally a reflection of the expected patterns of movement between poorer and wealthier countries, regions and sectors. It has been argued that Britain was simply the outlet for the poorest migrants, those who could not afford to go to the United States. Irish people tended to prefer the US option, it's true; and the American flow outstripped that to Britain in the 1850s and the pattern remained that way till the 1920s. But it is only partially true to say that the Irish in Britain were the poorest and least able from Ireland, for many of those who settled in Britain improved their prospects by staying, and included industrial workers who had no need of an American journey. What is clearly convincing is that some of the Irish consciously treated Britain as a stage in their step-wise, wave-like motion to other destinations. Yet the Irish were driven by the basic idea that, come what may, conditions in Britain would somehow be better than in Ireland. Quantities of Irish left for Britain regardless of the economic climate they found there. Indeed, the Famine generation provide a case in point: for they arrived en masse at a time of depression in Britain.

Liz Curtis (1984), Nothing but the Same Old Story: Roots of Anti-Irish Racism – Illustrated and very accessible

It is perhaps strange to think of the Irish as a distrusted migrant group, but the community has had that status through much of Britain’s history. Drawing on the article above and your independent reading, answer the following: