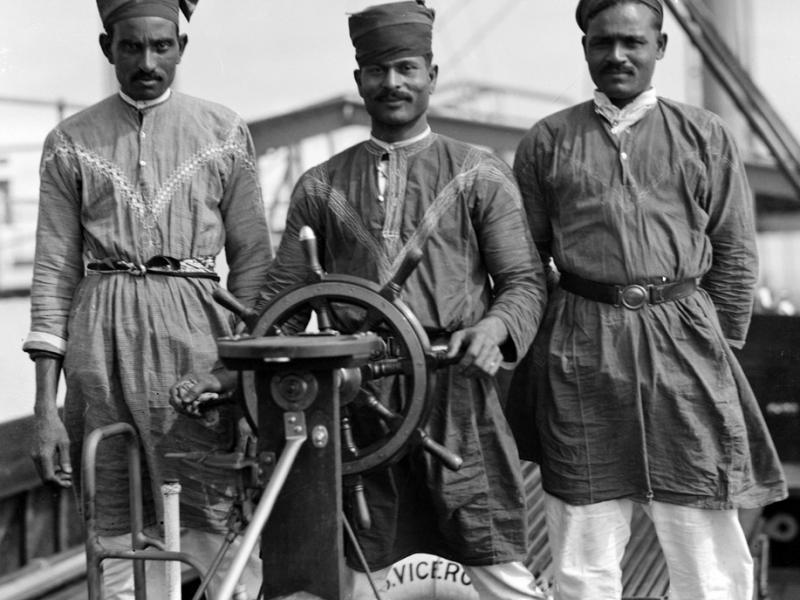 Three lascars of the ‘Viceroy of India’ (1929), standing behind the wheel of one of the ship's tenders. Courtesy of the Waterline Collection, National Maritime Museum, London
Show source description

This photograph shows three lascar sailors at work. They are well dressed and at least two of the three appear to be enjoying their work. The men are wearing an embroidered, knee-length, cotton tunic called a ‘lalchi’, and white pantaloons and a topi. The left-hand seaman is wearing a red ‘rhumal’ or folded cloth worn around the waist and knotted in front.

Lascars had manned P&O (‘Peninsular and Oriental’) vessels since the 1840s, working in groups as engine crews, deck hands, cabin stewards and waiters. P&O officers were expected to know basic Hindustani, the official language of the British Indian Empire, to help with communication.

What were the lives of these lascars like? Who were they? What was their connection to Britain and the British Empire? Did they migrate?

Lascars, or Indian sailors, first began to be employed in small numbers from the seventeenth century by the East India Company, which was set up by private merchants in 1600 by Royal Charter to establish trade links with India (see: 'Migrating home'). Lascars were engaged to fill the manpower gap on ships returning from India, as some British sailors deserted their ships in India and others died. When British sailors were needed for the Royal Navy during wartime, merchant ships had to rely on the labour of lascars. Because of this, during the Napoleonic Wars  of 1803-1815, the numbers of lascars employed on British ships shot up from 224 in 1803 to 1,336 in 1813. Lascars worked as able seamen, as deckhands and as cooks, and later, with the advent of steam-powered liners, in engine rooms as firemen and trimmers to stoke furnaces.

The term ‘lascar’ eventually became a descriptive term for almost all non-European sailors. Shipping companies recruited men of many backgrounds, including Arab, Cypriot, Chinese and East African (see: 'Britain's merchant shipping'). The vast majority though were recruited from the Indian subcontinent, mainly from maritime areas of Gujarat and Malabar on the west coast of India and the east coast from the area now known as Bangladesh. As demand for lascars increased, many were also recruited from agricultural lands in the Punjab and the North West Frontier Province, lured by the possibility of a regular income.

By the twentieth century, as trade expanded, many merchant ships began employing lascars and their numbers increased. By 1914, lascars made up 17.5 per cent of the total number of mariners manning British registered ships – some 51,000 men. Employed on ‘Asiatic Articles’ as opposed to ‘European Articles’, which defined their conditions of employment, lascars were paid less than European sailors by the shipping industry, which could make large savings by using lascars to increase their profits. At times, whole crews consisted of lascars. And, across many fleets, their treatment on board ships was harsh. 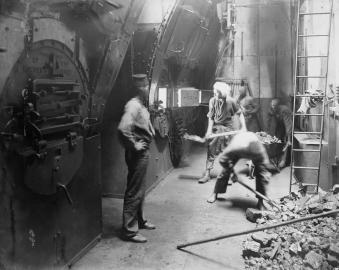 'Boiler Room', Lascar (Indian or south-east Asian) stokers in the hold of a P&O steamer shovelling coal to keep the fires burning. (Courtesy of Reinhold Thiele/Getty Images)
With the opening of the Suez Canal in 1869 and the introduction of steam navigation in the nineteenth century, demand for lascar labour became extremely high. European sailors shunned engine-room work as it was hot and uncomfortable. But the lascars were considered to be better suited to it as shipping magnates thought, incorrectly, that they were better able to withstand the heat of the engine room. Lascar crews, like any other crews involved in this difficult labour, would be overcome by exhaustion and there were instances of lascars in desperation jumping overboard to escape the heat.

Lascars were paid less than their European counterparts. According to a 1910 Parliamentary Report, they received only 8-9 shillings per week. They were often described as ‘docile’ and ‘manageable’ and unlike white sailors they were not unionised, so considered ‘trouble free’. Placed on the lowest rung of the imperial hierarchy of sailors, lascars were discriminated against, paid less, treated poorly on board ships and worked in difficult roles on steam-powered liners.

Once in Britain lascars had to wait in idleness, often for months at a time during winter, before they could get a return ship back to India. Shipping companies did not provide proper accommodation while they waited, and in the nineteenth century, it was not uncommon to see distressed lascars wandering in the streets. The term ‘the black poor’ came to be first applied to describe destitute Indian sailors waiting to go home.

Christian missionary societies became concerned about the plight of lascars. This led to the establishment of the Strangers’ Home for Asiatics, Africans and South Sea Islanders in West India Dock Road in the East End of London in 1856, which housed diverse groups of sailors.

Low pay and ill treatment on board British ships also led some lascars to desert or jump ship in Britain. For instance, Joseph Salter in The Asiatic in England (1873) records a harrowing tale of Muslim sailors deserting on arrival in London as they had been ‘hung up with weights tied to their feet, flogged with rope and forced to eat pork’. Many deserters settled in Britain and hoped to continue seafaring on European Articles, which doubled or trebled their wages.

A small population of lascars started to grow up in London, Liverpool, Cardiff and Glasgow and formed the earliest Indian working-class communities in Britain. These port cities became multiracial settlements with sailors from diverse countries mixing relatively freely with the local population, some marrying and starting families with English and Irish working-class women. Lascars in Britain earned their living by various means: as sailors, if they could, on European Articles; as crossing-sweepers; as peripatetic singers and musicians; as sellers of Indian articles like curry powder or perfume which they concocted themselves; as lodging-house keepers and café and curry-house owners who largely served their fellow sailors. Some were helped by their English and Irish wives, women who were generally looked down upon and called names like ‘Calcutta Louise’ or ‘Lascar Sally’ because of their mixed-race relationships.

However, with time and more than a little effort, inhabiting the same community spaces enabled lascars to merge at last with their local working-class populations. Lascar labour was indispensable to British industry. Without their labour the British Merchant Fleet could not have functioned. They were responsible for transporting raw materials and manufactured goods, as well as passengers, across the world within Britain’s imperial economy, and Britain’s wealth and prosperity could be said to have been built on the backs of these poorly paid sailors.