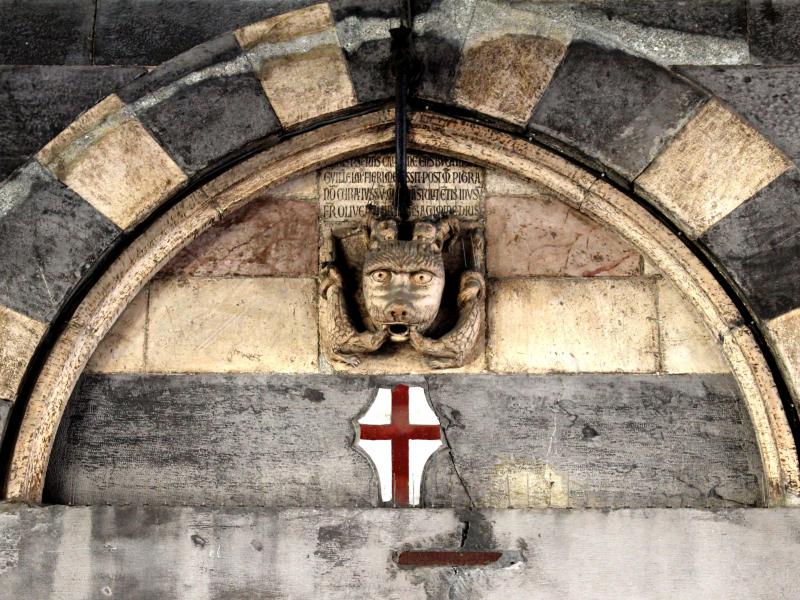 This photo depicts the remnants of stone fountain that today can be found above the main portal within the Palace of Saint George in Genoa. The carving is the work of an unknown Byzantine sculptor. According to written sources, the fountain came from Constantinople in 1262 as a war trophy. It was probably in 1262 that the lion's head was transported to Genoa and mounted over the main portal as a testament to victory over Venice. Note the red and white flag of Saint George underneath.

By birth a Cappadocian

From Armenia to Nubia to Rome, early Christians honored Saint George. The legend of Saint George emerged out of early Christian tales of persecution and martyrdom at the hands of the Roman Emperors, the dragon entering the story much later, at a time when the peaceful and pious martyr had transformed into the warrior-saint of crusading Europe.

The earliest known depictions of Saint George killing the dragon come from Cappadocia (see map, below), a region of what is now known as Turkey, in the eleventh century. 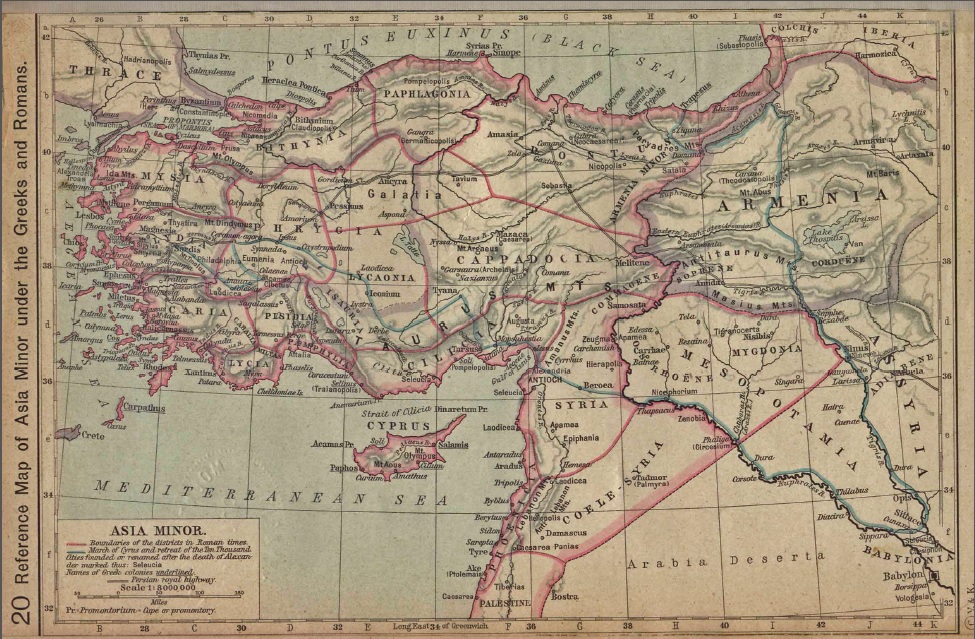 (Map from Historical Atlas by William Shepherd, 1923–26. Courtesy of University of Texas at Austin)

The legend of St George exists in Christian tales in a number of languages, including Syriac, Arabic, Coptic, Nubian, Ethiopian, Armenian, Latin, and Greek. The Coptic version, among the earliest of the legends, probably dating back to the fifth or sixth century, recounts George’s encounter with a Persian king or governor of Bithynia:

Now there was a young man whose name was George, the sun of truth and the glorious star between heaven and earth; he was a tribune in the imperial army, and came from Cappadocia. And when he had served his time as tribune and acquired much wealth, he came to the governor Dadianus and wished to be made a count by him. When Saint George came to the city and saw the frenzied idolatry of the governors and that they had forsaken God, he immediately decided to give up his rank of tribune, saying, 'I will become a soldier of my Lord Jesus Christ the King of heaven.' And when he had distributed all his wealth and given what he had to the poor, he rushed into the presence of the governors and cried out, saying, 'Cease your frenzy, O governors, and proclaim not to be gods the things which are not gods… As for me, I will worship one God, the Father of our Lord Jesus Christ and the Holy Spirit.'

The dragon looked at him, and said, 'Every person who has gone forth from the benevolent guidance of the gods perishes, and as for us, we worship things which are beneath (the heavens), for the gods Fire and Sun appear to us as mighty beings; know now that you have not only insulted us, but you have also insulted the righteous gods. Offer sacrifice then to the gods and to Apollo who is the saviour of the whole world, and be convinced that the gods whom you insult know those who honour and obey them, and know how to punish those who disobey them. And now, tell me where you come from? What is your name? And for what purpose have you come here?'

Saint George answered, and said, 'The chief name which I bear is Christian. I am by birth a Cappadocian. I was a soldier in a famous company, and I served with honour in Palestine. Who are the gods whom you would force me to worship, O king?' The governor said to him, 'I desire that you worship Apollo who hung out the heavens, and Poseidon who made fast the earth.' Saint George answered and said, 'Neither for your sake, O evil dragon, nor for that of the governors your companions will I speak about the righteous ones and your dead god, but for the sake of the multitudes here present. Whom would you compel me to worship, O king? Peter the chosen one of the Apostles, or Apollo who corrupts the whole world?'

The governor of Bithynia, Dadianus, had George tortured for his defiance, and the story is full of grisly detail. As the story goes, George was torn to pieces, cast into a cauldron of boiling water and his head was beaten with a heavy hammer until his brains, “white as milk” according to one manuscript, oozed from his nose and mouth. The stories claim that George survived all these trials, and was finally executed. 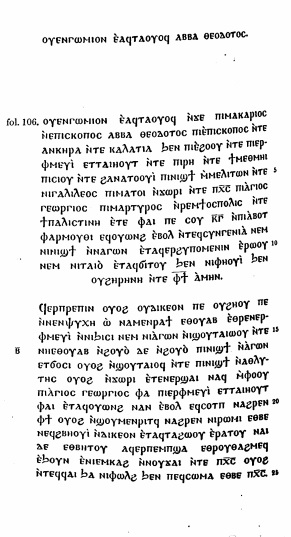 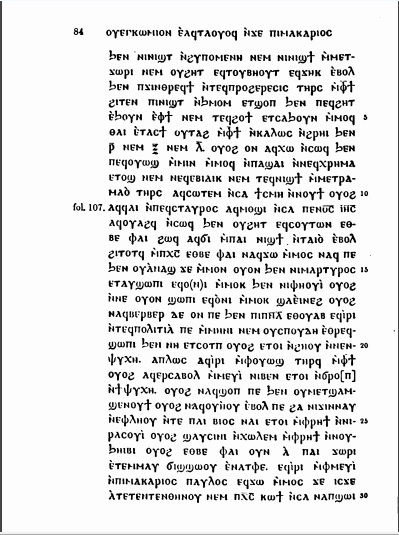 This is the legend – yet no contemporary source exists for George's life or martyrdom, and nothing is known for certain about him. Most accounts put his birthplace in Cappadocia, but others say that his father was from Cappadocia and his mother was from Palestine. Some later accounts replace Dadianus with Roman Emperor Diocletian, who was known for his persecutions of Christians, and make George a Roman soldier. In AD 494, a council of bishops in Rome attempted to separate authentic from apocryphal texts, and rejected this legend of George's martyrdom as clearly false.

Nevertheless, these stories continued being told for centuries, and George became one of the most popular saints in Western Europe. Gregory of Tours spoke of his relics and dedicated a church to him. In the eleventh century in the reign of Canute, there was a monastery of Saint George at Thetford. Ælfric, archbishop of York from 1023 to 1051, began his Passion of Saint George with these lines:

‘Heretics have written falsehoods in their books

about the holy man who is called George.

Now will we tell you that what is true about him

that error may not secretly harm anyone.

The holy George was in heathenish days

a rich ealdorman under the fierce Caesar Datianus

in the shire of Cappadocia.’

Saint George: ‘the patron of crusaders’

The popularity of George the soldier-saint in later medieval times was a result of the Crusades. There were reports that in 1063 in a battle in Sicily between Normans and Fatimid Muslims, a vision of Saint George was seen in shining armour with a white banner. In Constantinople the crusaders saw the splendid church of Saint George and when they reached Antioch (see map) and Jerusalem, visions of George were reported.  A church at Fordington in Dorset has a bas-relief over its doorway depicting George’s appearance at Antioch, and paintings of him dated to the twelfth century exist in Westmeston and Hardham in Sussex. It has been said that Richard the Lion-Heart saw a vision of George in Palestine, placed his army under the saint’s protection, and promoted the cross of Saint George as a national emblem, but these were all legends that originated in Tudor times.

The flag of Saint George: a Genoese creation

Indeed, the flag of Saint George, red on a white cross, came to England well after Richard’s reign. In the thirteenth century, the Genoese Jacobus de Voragine compiled a collection of the lives of saints, the Golden Legend (Legenda Aurea), which became one of the most popular books in medieval Western Europe. It was Jacobus who transformed the white cross into a red one, and the popularity of the Genoese legend ensured that the Genoese red cross was widely picked up all over western Europe. The popularity of the Golden Legend book likewise widely spread the tale of George killing a dragon. 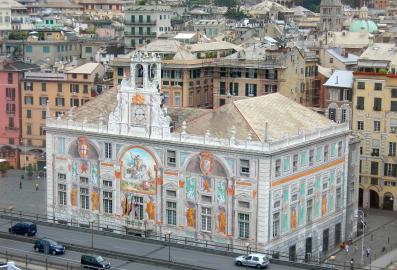 Palazzo San Giorgio: The Palazzo San Giorgio or the Palace of Saint George was begun in 1260 as the seat of the Genoese municipal government, and was then known as Palazzo del Mare or Palace of the Sea. The façade of frescoes dates from the nineteenth century

From Genoa to England: a symbol of political power

At the time of the crusades, Genoa and the northern Italian city-states were at the forefront of European culture and finance. Manuscripts of the Golden Legend circulated throughout Europe and soon reached England. In the centuries following it is still too early to speak of Saint George as a national patron, but he had become a potent symbol of political power. English kings of the fourteenth and fifteenth centuries venerated Saint George to demonstrate their worthiness and right to rule, and opponents of these kings also used Saint George to criticise their sovereignty.

It was not only the flag of Saint George that travelled between Genoa and England. The Genoese innovated in navigation and commerce, and their increasingly sophisticated organisation of public debt is the foundation of modern finance, centuries before the Bank of England and the East India Company. The bill of exchange, third-party insurance, and public finance either originated in Genoa or else spread from there to the other Italian city-states and later to northwest Europe. 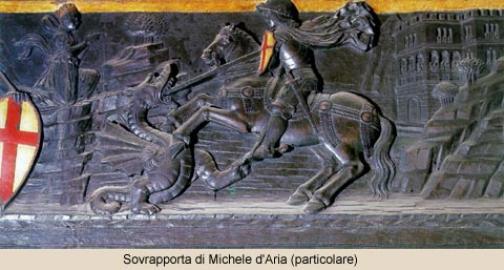 Michele d'Aria, late fifteenth century. It is important to remember that medieval Europeans believed dragons to be real. They were featured in bestiaries and encyclopedias alongside camels and elephants.

There were other warrior-saints with similar origins, notably Saint Demetrius of Thessaloniki, but the Crusaders returning from the Middle East brought back the veneration of Saint George, ensuring his place throughout Europe and England. George's legend changed dramatically over the centuries, from that of a pious martyr to a warrior-saint to a potent symbol of kingship to a national icon.

Though the Middle Eastern origins of Saint George have largely been forgotten, this origin is perhaps not surprising when we remember that Christianity itself began in the Middle East.

It is also important to note that England and Great Britain are not alone in their veneration of Saint George – Portugal, Romania, and Georgia count him as a patron saint, as do the island of Malta and the city of Genoa.

E. A. Wallis Budge (2011), The Martyrdom and Miracles of Saint George of Cappadocia

Jonathan Good (2009), The Cult of Saint George in Medieval England

The Flag Institute (The UK’s National Flag Charity), The Many Crosses of St. George