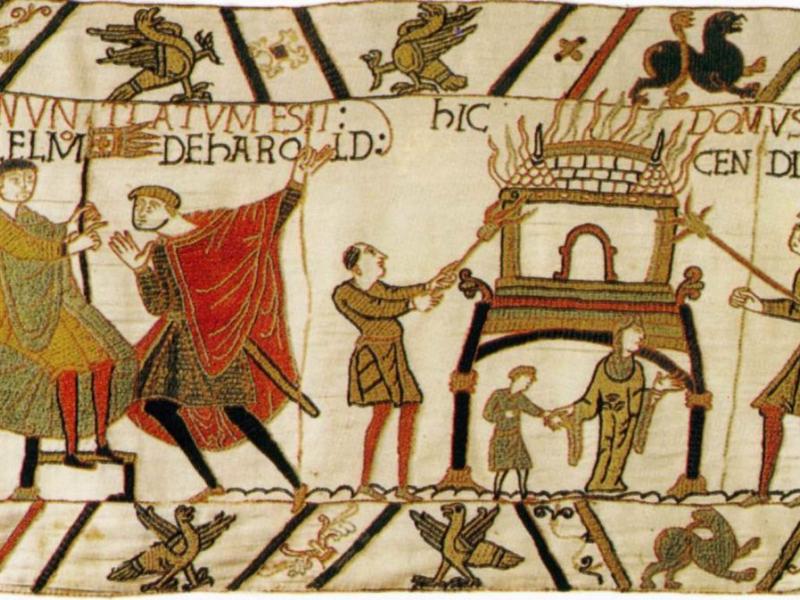 The image depicted in the source, of a woman and child in front of a burning castle in England, stands out as an illustration of the vulnerability of English women at the hands of Norman invaders.

The Bayeux Tapestry, a famous embroidery dating to c. 1080, named after the Norman cathedral at Bayeux that housed it,  tells the narrative of the Norman conquest from a Norman perspective. In one of its scenes it shows an English woman and child fleeing from a burning house on a hill set alight by Norman soldiers.  We may note that the woman and child are alone and that there is no father or husband in sight. The subtext is that her protector(s) had been killed by the invaders.

The Norman conquest and French immigration

The story of French immigration into England as a result of the Norman conquest in 1066 is best told in two parts. First there was the military invasion and conquest, accompanied by violence and warfare, which resulted in the forceful occupation of England by a small aristocratic military elite. This initial phase was then followed by a period of approximately three generations, or 100 years, during which  increasingly more people, of various social statuses, from western France settled in England, and ultimately became absorbed into the English population.

Norman-French migration to England was never a mass immigration of destitute people fleeing their lands in search of work and a new life. This was a migration caused by a military event and political takeover of England by an ambitious French warlord with a band of military followers. Although William the Conqueror (1027-1087) claimed the English throne on the grounds of consanguinity there is no doubt that he was attracted by the wealth of England. The kingdom was rich in mineral resources and the most centrally administered country in western Europe. Its wealth in taxes and income from land created direct income for the king, who in turn used it to reward his followers.

Phase one: the elite military takeover of England

The first phase began in January 1066 when the childless King Edward the Confessor of England died. His brother-in-law Harold was elected king, an election contested by Edward’s Norman cousin William, Duke of Normandy, better known as ‘the Conqueror’, who laid claim to the English throne. Backed by Pope Alexander II in Rome William began recruiting troops and ships in order to launch an invasion in late September 1066. After a victorious battle near Hastings in which King Harold, alongside most of the male aristocracy of England, was killed, the Normans claimed success and the English submitted to their conqueror. On Christmas Day 1066 William was crowned king of England at Westminster Abbey.

Thus, the Norman Conquest of England in 1066 was a military takeover of England by William, Duke of Normandy. He had arrived uninvited with a large invasion fleet and army consisting of Norman, Breton, Flemish and other French soldiers. Numbers are hard to come by but a conservative estimate is that the Conqueror’s army comprised approximately 5,000 to 8,000 men, of whom twelve became the richest landholders in England. This is a relatively small number given that the estimates of the English population suggest a number between 1.5 and 2 million indigenous people.

In the wake of victory, those who were married brought their wives and children to England from France. But many soldiers were unmarried and were not easy to control as a social group. Indigenous English women became a vulnerable group as a consequence.

Invasion and the impact on women: violence and refuge

There is no doubt that William the Conqueror anticipated the potential of his soldiers’ physical violence against women. According to William of Poitiers, the Conqueror’s biographer, who wrote c. 1077, the Conqueror had warned his fighters to restrain themselves towards their victims, including women, because they were all fellow Christians and they should not be provoked into rebellions. The writing of chroniclers of the period also suggests that English women had more to fear from lower-born French soldiers than from high-ranking French nobles.

An important clue about the vulnerability of English women after the Norman conquest of England in 1066 comes from a letter written by Archbishop Lanfranc of Canterbury (1070-1089), the right hand man of William the Conqueror, to an unidentified Bishop G. The letter was probably written in the late 1070s, about one decade after the successful invasion. In it Lanfranc replies to a query about nuns who had entered monastic life not for love of God but for more prosaic reasons. Lanfranc writes:

'As to those [nuns] who, as you tell me, fled to a monastery not for love of the religious life but out of fear of the French, if they can prove that this was so by the unambiguous witness of nuns better than they, let them be granted unrestricted leave to depart. This is the king’s policy and our own.'

The clue lies in the phrase ‘for fear of the French’. What might this mean?

Two broad explanations present themselves: either fear of sexual violence by the foreign conquerors, or fear of coercion to become part of a forced marriage.  Either way, English women who could afford to seek refuge in a monastic environment could stay out of reach of French men. Some women sought refuge with monks. The Domesday Book provided us with the number of women linked to monks’ communities in Canterbury – four women were attached to St Augustine’s and five in Evesham.

The Domesday Book is the most important source for historians interested in the permanent settlement of Norman-French immigrants to England in this period. The book is a large medieval manuscript compiled at the orders of William the Conqueror in 1086. It records the names of all owners of land at the time of King Edward’s death in January 1066, at the time of King Harold’s death in October 1066, and at the time of its compilation in 1086.  A comparison of landowners' names across the three dates shows, beyond any doubt, that English landholders were wiped out across this period and that by 1086 most of the land was in the hands of French immigrants.

The Domesday Book, written in 1086 (Courtesy of The National Archives. Catalogue reference: E 31/2)

Arguing that English landholders had been traitors alongside King Harold, William confiscated their lands and handed them to his own French followers. The newcomers received land from Cornwall to Northumberland. The largest concentrations of French people could be found along the eastern coast of England – in Lincolnshire, Norfolk,  Essex,  Kent and Sussex.  Most English landholders – from nobles to peasants – lost their possessions and became the tenants of the French. It is in this context that we have to understand the incidence of intermarriage.

Intermarriage: a tool of peace negotiation

Women who had inherited family land because their husbands or fathers had been killed at Hastings in 1066, were only allowed to keep their family land if they married a Norman or Frenchman. In a sense such marriages were alliances, established to further the post-conquest social order and peace in England.

Within a decade of the conquest William the Conqueror himself did not refrain from using women in his own family as tools of peace negotiations. He betrothed his daughter Adeliza to the English Earl Edwin, though he was killed in 1070 before the marriage could take place. He married his niece Judith to Earl Waltheof (d. 1075) also an Englishman. These were high-status examples of exogamy.

Although most intermarriage took place at the highest aristocratic level, to broker peace deals, there were several instances of intermarriage at middling noble level. At lower social, but still noble, level we find mostly foreign men marrying English women. For example, Wigot of Wallingford, the English guardian of an important crossing of the Thames near Oxford, agreed to have his daughter Ealdgyth marry Robert d’Ouilly, one of King William’s henchmen and later Castellan of Oxford. The Domesday Book also tells us that an anonymous soldier, in the following of the Breton Knight Winehoc, had fallen in love with an anonymous woman, who was the owner of some land in Pickenham in Norfolk. This is, incidentally, the only explicit reference to love in the whole of the Domesday Book.

‘...but now with the English and the Normans living side by side and intermarrying, the two nations are so mixed that  today one can scarcely distinguish who is English and who is Norman – among free persons, that is’.

How do we explain this?

Gradual acculturation between French immigrants and English people is the most likely answer. Modern scholars argue that the period between 1140 and 1150, about 80 years after the Norman Conquest, was the moment when the descendants of the original Norman-French immigrants considered themselves to be English, rather than French.

This relatively small group of immigrants introduced the elite language of French to England. French remained the language of the Royal Court into the fourteenth century, and of the Courts of Justice into the sixteenth century. This small group of migrants was gradually absorbed into the settled English population. The evidence for this process of acculturation is provided by the fact that the English language was never replaced. The English language, albeit with an enlarged vocabulary of French-derived words, survives until our own time.