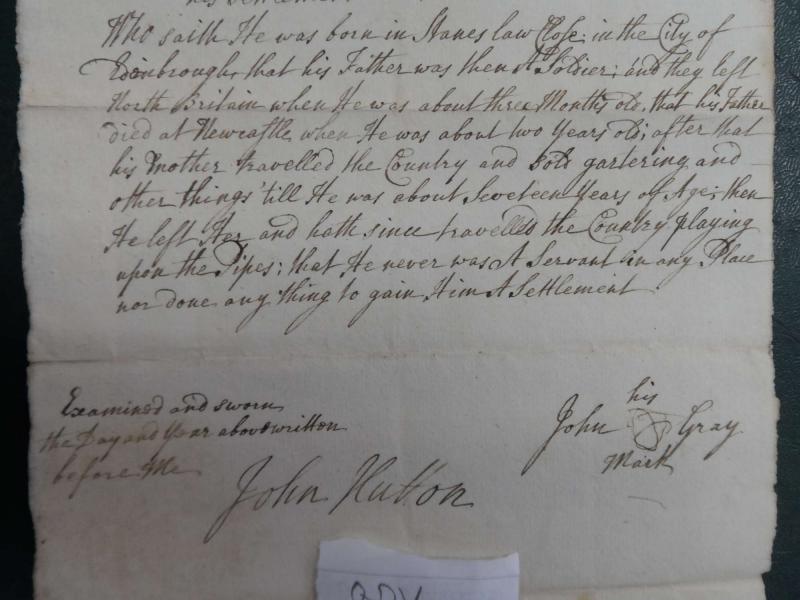 Who saith He was born in Staneslaw Close in the City of Edinbrough, that his Father was then A Soldier; and they left North Britain when He was about three Months old, that his Father died at Newcastle when He was about two Years old; after that his Mother travelled the Country and sold gartering and other things ‘till He was about Seventeen Years of Age; then He left Her and hath since travelled the Country playing upon the Pipes; that He never was A Servant in any Place nor done any thing to gain Him A Settlement.

The above source, recording the interrogation of a suspected vagrant in North Riding, Yorkshire, relates to the migration into England of people from Scotland.  Scots from all walks of life moved to England in the early modern period, as indeed they had been doing throughout the Middle Ages and would continue to do in more recent times.

Wealthier or better-educated Scots – aristocrats, merchants or doctors, for example – tended to be attracted by the chance of making money, gaining political influence or forging high-powered careers, and these kinds of people often ended up in big cities, especially London. These were the kinds of individuals who, before the union of the crown in 1603 (when Scotland and England started sharing the same king), would have made their living in and around the royal court in Edinburgh, or, if they did wish to leave Scotland, probably would have gone to seek their fortunes in European countries like France or Italy. Often there was a religious element to this elite movement, especially during the seventeenth century, when clergymen belonging to groups persecuted in Scotland, usually either Episcopalians or Presbyterians, could flee across the border in search of a safe haven. Poorer Scots, on the other hand, usually came to England in search of jobs or to escape hardship at home. These people might have ended up in London, but often they settled in other parts of England, like Newcastle, where they found work in the coal industry, or Bristol, where they could work on the slave ships sailing to Africa and America.

Richer Scottish migrants tended to have a much easier time in England than poorer ones, not just because they had money, but also because they had useful skills that could help them find work, as well as, in many cases, family members or friends already in England who could help them out.  Consequently, they were often able to blend easily into English society, with many of them ending up fully assimilated and widely respected in their fields. Indeed, their success, particularly in areas like medicine, was sometimes great enough to attract a good deal of jealousy. The poor, however, who did not have the funds or connections of their richer countrymen, faced being scorned as a dangerous drain on English resources. They often attracted intense fear and criticism, and if caught begging, unemployed or otherwise in need of charity, were likely to be sent back to Scotland.

We do not know exactly how many Scottish migrants came to England, but some estimates suggest there might have something like 250,000 of them in the seventeenth and early eighteenth centuries.  Whatever the figure, it was almost certainly a lot higher than the number of English people who moved to Scotland – England was larger, wealthier and more highly developed, and so unless they had good reasons for going northwards (maybe family connections or a particular set of skills), English emigrants were probably more likely to go to Ireland, Europe or North America in search of new opportunities.

'Vagrancy examinations' and the case of John Gray

The above source about John Gray is an example of a ‘vagrancy examination’. In this period, anybody who moved around England without a job, or who was caught begging, ran the risk of being labelled a ‘vagrant’, which was a criminal offence. Such people would be called before local justices of the peace and ‘examined for settlement’, meaning they would be asked where their legal place of residence was. Once this was discovered, they would be issued with a ‘pass’, a document ordering them to return to their place of settlement. In John Gray’s case, his examination reveals that his place of settlement was Edinburgh, the capital of Scotland, to which he was sent back. These kinds of sources are very useful for historians wishing to trace the movement of poorer people around the country, and they can also be valuable because they might give us detailed summaries of an individual migrant’s past movements. This source, for example, tells us that John Gray moved from Edinburgh to Newcastle, then spent several years travelling around England before ending up in Yorkshire.

John Gray was one of at least 60 Scottish vagrants caught in Yorkshire during the first half of the eighteenth century, and there were probably many in the seventeenth century as well. Many of these vagrants, like John Gray, were young, unemployed men, but some, like 54-year-old James Ogilvie, apprehended in 1745, were older, while others, such as Mary MacDonald and Rose Cameron, caught together in 1744, were women. We know that Scottish vagrants turned up in many other parts of England – surviving sources suggest that at least a few of them were caught in places as widespread as Cumberland, County Durham, Bedfordshire, Norfolk, Wiltshire, Cornwall, Sussex and, of course, London. Some of these people were already vagrants when they came to England, and this sort of migration was especially common during times of hardship in Scotland, for example during the 1690s, when there was a major famine. Others, however, moved to England to work, and only became vagrants later on after losing their jobs.

John seems to have migrated because his father’s work as a soldier brought him to England, which is an example of the sort of ‘pull’ factor that might cause people to move. That John ended up being apprehended and examined as a vagrant, before being sent back to Scotland, reflects the negative view of the state towards poor migrants and its desire to get rid of them. The source also tells us some interesting things about how a Scottish migrant’s life might develop once they arrived in England.  John and his mother clearly relied on his father’s work to survive.  They therefore faced difficulties in making a living after he died, but they were able to respond by travelling around the country, as a wandering musician (in John’s case) or selling haberdashery (in his mother’s case), whatever the risks of being considered 'vagrants', tried in a court of law, and then being forced to leave.

Written by Professor Keith Brown, Vice-President and Dean of the Faculty of Humanities, University of Manchester

The source is tied to some important GSCE assessment objectives. In particular, it can help us to develop an understanding of causation and consequence, since it gives us clear evidence about how a series of life-events, including movement from Edinburgh to Newcastle and the death of his father, influenced the course of John Gray’s life. It can also raise questions about some other key concepts, including continuity and change, similarity and difference.