An American princess in London 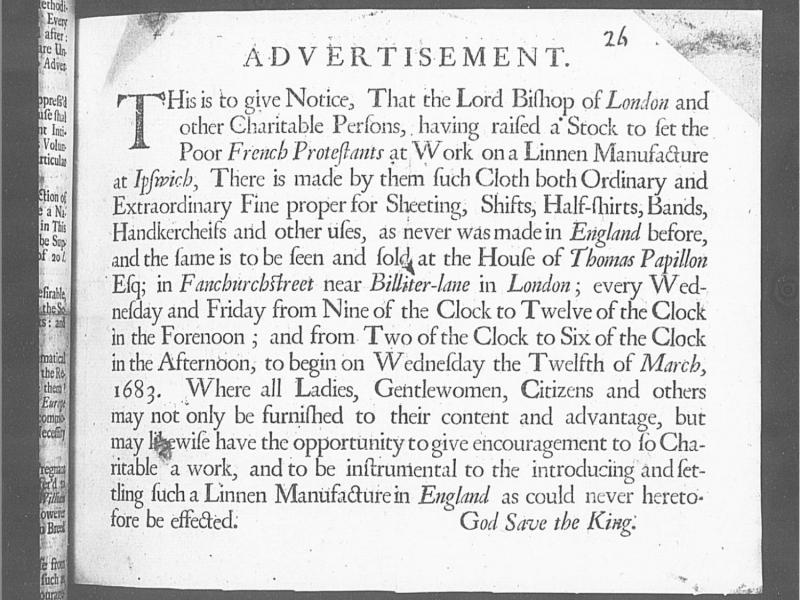 This ‘Advertisement’, reproduced above, was printed in 1683. It would have been circulated around London and attached to noticeboards in prominent places. It records the significance of a recognisable ‘poor’ community of French Huguenot refugees who were distinct from richer Huguenot merchants who were already established in England, like the Advertisement’s sponsor Thomas Papillon (1623-1702). The source offers an interesting and important insight into how earlier (in this case much smaller) communities of migrants would assist later arrivals.

Huguenot refugees: The revocation of the Edict of Nantes

Thomas Papillon’s Advertisement (reproduced above) and King William the III's Declaration (as seen below) relate to the arrival in England, in the wider British Isles, and elsewhere in Europe, of the French Protestant refugees known as Huguenots, during the 1680s and 1690s, on either side of the revocation of the Edict of Nantes in October 1685. The Edict had given protection to French Protestants within France for over a century. Its revocation ended that protection and compelled a massive forced movement of French Protestants around Europe in diaspora.

In all, about 200,000 Huguenot refugees left France during the reign of Louis XIV and about a fifth of those came to England. The rest went to the Netherlands, Germany, Scandinavia, and the Americas (where, in most cases, they were warmly received). Across the parts of Europe where they settled, the Huguenots received an especially warm welcome where they brought new skills – in silk production and metalworking. But where they proposed to integrate with the existing labour forces of well-established industries like paper and glass manufacturing, they sometimes experienced intolerance. Large communities of Huguenots settled in London – especially in Spitalfields – and in Canterbury, Exeter, Plymouth, Norwich, Rochester, and Southampton, as well as in many other towns around the country.

Across England, the Huguenot immigrants distinguished themselves as artists, engravers, print-sellers, paper-makers, booksellers, bookbinders, furniture-makers, wood carvers, sculptors, gun-makers, gold- and silversmiths, jewellers, clock- and watchmakers, painters, glassmakers, ceramicists, ivory turners, silk and textile workers, doctors, scientists, writers, merchants and bankers. The variety of their impacts underscores the extent to which their migration was both gain to England and a loss to France.

As King William III’s Declaration makes clear, a distinguishing feature of this migration was the explicit state support it received. 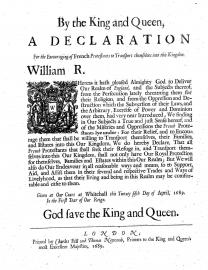 King William III's Declaration. Courtesy of The British Library
The Declaration was printed in London in April 1689, six months after William of Orange had landed to take the throne of England. William had long supported the plight of the Huguenots. His support was not altruistic because he understood the assistance this powerful group of refugees could offer him in his war with the French King who had persecuted the Huguenots – Louis XIV. The Declaration offers the historian a useful insight into the official government approach to the Huguenot arrival. The Declaration clearly shows how William expected the English to welcome Huguenot refugees because of a presumed empathy with them born of the shadow of state persecution extended by William’s predecessor, James II.

Along with official support, appeals to a transnational notion of shared Protestant identity also proved helpful for the Huguenots. Arguably, no other refugee group of this period made a broader impact than they did: they revolutionised the textiles industries, the arts and journalism, and provided much of the hard cash for the financial revolution that took place in London in the 1690s and allowed the English state to defeat Louis XIV.

This ‘Advertisement’ in the source above was printed in 1683 – a couple of years before the revocation of the Edict of Nantes. It would have been circulated around London and attached to noticeboards in prominent places. It records the significance of a recognisable ‘poor’ community of French Huguenot refugees who were distinct from the richer Huguenot merchants like the Advertisement’s sponsor, Thomas Papillon (1623-1702). Papillon descended from a Huguenot family, but was born and educated in England. He became one of the leading overseas merchants of the City of London, holding high office in the East India Company (a trading company that developed England’s commerce with Asia). Around the time this Advertisement was published, Papillon, already elected a sheriff of London, had his candidacy questioned because of his foreign background. The source shows how, prior to official state invitation of Huguenots, merchants of shared ancestry raised money to form charitable corporations that would provide employment for poor refugees. It offers an interesting and important insight into how earlier (in this case much smaller) communities of migrants would assist the later waves. It records how merchants used the skills of these forced migrants to promote the refugee presence in the country and how corporations often fused philanthropic and commercial agendas.

Written by Dr William A. Pettigrew, Reader, School of History, University of Kent

As a persecuted religious minority, the Huguenots were forced out of France. Both sources imply a need to convince the English population of the merits of the newly arrived Huguenots.

In the Advertisement, a case is made for welcoming them that notes their economic skills. In William’s Declaration, the official state support for their arrival was perhaps as much a warning to those Englishmen and women who might have wished to resent their arrival as it was encouragement for the Huguenots themselves.

Papillon’s Advertisement suggests an early appreciation of what became a key effect of the Huguenots' arrival in England: a marked and durable impact on the quality of textile manufacturing. It also shows how earlier migrants – in this case Papillon – helped welcome and organise newer arrivals into structured groupings.