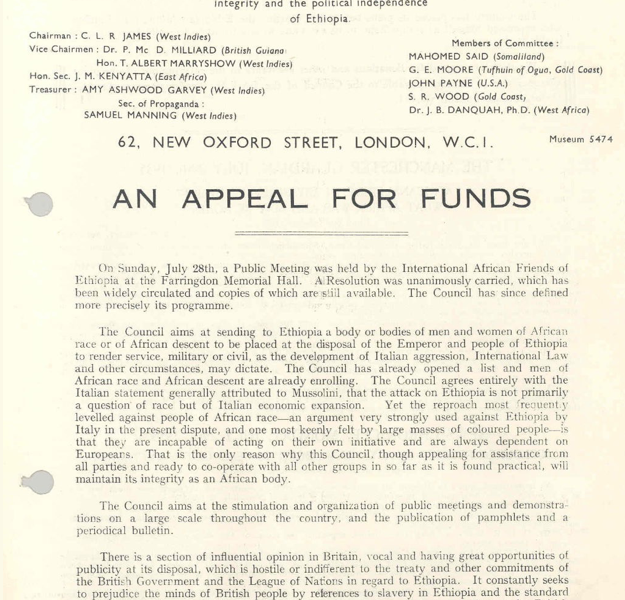 An appeal for funding support from the International African Friends of Ethiopia, 1935 (Courtesy of the Modern Records Centre, University of Warwick)
Show source description

This appeal from the newly formed International African Friends of Ethiopia (IAFE) gives an insight into both the feelings and motivations of the activists who formed the group, as well as their activities and plans.

(Source information: the document is included in a file on 'Abyssinia: Italian dispute', in the records of the Trades Union Congress. Document reference: MSS.292/963/2. Courtesy of The Modern Records Centre, University of Warwick)

In early 1935, the murderous intentions of the dictator of fascist Italy, Benito Mussolini, to conquer the East African state of Ethiopia (then called ‘Abyssinia’) were declared. Together with Liberia, Ethiopia was one of the last areas of Africa free from European control, its armies having defeated Italy at the battle of Adowa in 1896. However, since 1932 Mussolini had been preparing Italian troops for their role in what he called the glorious resurrection of the ‘Roman Empire’. In order to justify this nineteenth-century style of empire-building, the fascist government claimed that its invasion was ‘humanitarian’ and promises were made to free the enslaved of Ethiopia, then about two million strong. In the style of colonising powers before and since, this invasion and occupation of a sovereign nation was declared to be, as Mussolini himself put it, ‘a war of civilization and liberation’. 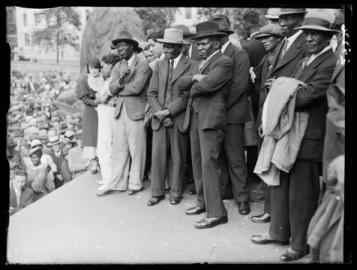 Meeting of the International African Friends of Ethiopia, London, 1935, A photograph of people on the platform at a meeting of the International African Friends of Ethiopia in Trafalgar Square, taken by Tomlin (Courtesy of Daily Herald Archive/SSPL/Getty Images)
For Africans, and for the several thousand people of African descent in Britain during the inter-war period, the spectre of Mussolini’s army, known as ‘blackshirts’, attacking an independent African nation in order to ‘civilise’ it, filled them with both horror and rage. In July 1935, the Trinidadian writer and socialist activist C.L.R. James joined with others including the Jamaican Amy Ashwood Garvey and the Kenyan nationalist Jomo Kenyatta, to form what became the International African Friends of Ethiopia (IAFE) in London.

These men and women were leading figures in the African diaspora in Britain at the time. C.L.R. James (pictured in a programme for ‘C.L.R. James Week’ in Hackney in 1985) was the author of works such as the classic history of the Haitian Revolution, The Black Jacobins, and the pioneering West Indian novel Minty Alley (1936), one of the first books published in Britain by a black writer from the Caribbean.  He was also one of the first black professional sports reporters in Britain and the first black playwright to have a play performed by black professional actors on the British stage (Toussaint Louverture, 1936, a play about the leader of the Haitian Revolution which starred the famous African-American actor Paul Robeson in the title role). Amy Ashwood Garvey, alongside her husband Marcus Garvey,  was a vocal activist in support of black communities in Britain, the United States and the Caribbean. And Jomo Kenyatta would go on to become the first president of an independent Kenya. 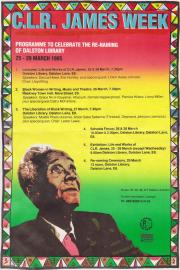 The goal of  the IAFE was to rally solidarity with the people of Ethiopia in the face of Mussolini’s war plans. The IAFE was a militant organisation with Pan-Africanist principles. Like other ‘Pan-African’ organisations before and since, they believed in the need for unity between all peoples of African descent. During the 1930s, the IAFE showed a new level of politicisation and radicalism among the small black community in Britain (then only about 10,000 strong).

The appeal from the newly formed IAFE (see main source), gives an insight into both the feelings and motivations of the activists who formed the group, as well as their activities and plans. The Council of the IAFE aimed to send ‘men and women of African race or of African descent’ to offer military or civil aid following the invasion of Abyssinia (Ethiopia) by Mussolini's Italy. IAFE members were eventually persuaded by Dr. Martin, the Ethiopian Minister in London, that their efforts on behalf of Ethiopia would be better directed from Britain; in addition, the British Foreign Enlistment Act of 1870 forbade British subjects from joining the forces of countries – in this case Italy and Ethiopia – that maintained friendly relations with Britain.

In October 1935, the Italian-Ethiopian war began, and despite the best efforts of Pan-Africanists internationally and the continuing resistance from the poorly equipped Ethiopian forces, by 1936 Mussolini's forces had occupied the country. The key activists involved in the International African Friends of Ethiopia – which now also included figures like the Trinidadian journalist and writer George Padmore and I. T. A. Wallace-Johnson from Sierra Leone – reformed themselves in 1937 into a broader Pan-Africanist organisation to challenge European colonialism and racism across the African diaspora, the International African Service Bureau (IASB). The IASB – and its later manifestation as the Pan-African Federation in the 1940s – was the organising centre for the historic Fifth Pan-African Congress which took place in Manchester in October 1945. The Congress was attended by delegates from across Africa, America and the Caribbean and included, among others, the future leader of Ghana, Kwame Nkrumah, and helped to arm activists with ideas, strategies and tactics for the liberation struggles that lay ahead.

Colin Chambers (2011),  Black and Asian Theatre in Britain: A History

C.L.R James (2013), Toussaint Louverture: The Story of the Only Successful Slave Revolt in History; A Play in Three Acts

Minkah Makalani (2011), In the Cause of Freedom: Radical Black Internationalism from Harlem to London, 1917–1939

Marc Matera (2015), Black London: The Imperial Metropolis and Decolonization in the Twentieth Century

This source reveals that Pan-Africanists in London were at the heart of the international opposition to Mussolini’s fascist and colonialist war in Ethiopia. Many of the people associated with the IAFE would have never visited Africa themselves, having been born in the Caribbean, or Britain, or the United States.

In light of that, and the information above, consider the following questions: