Global Britons at war: from service to settlement 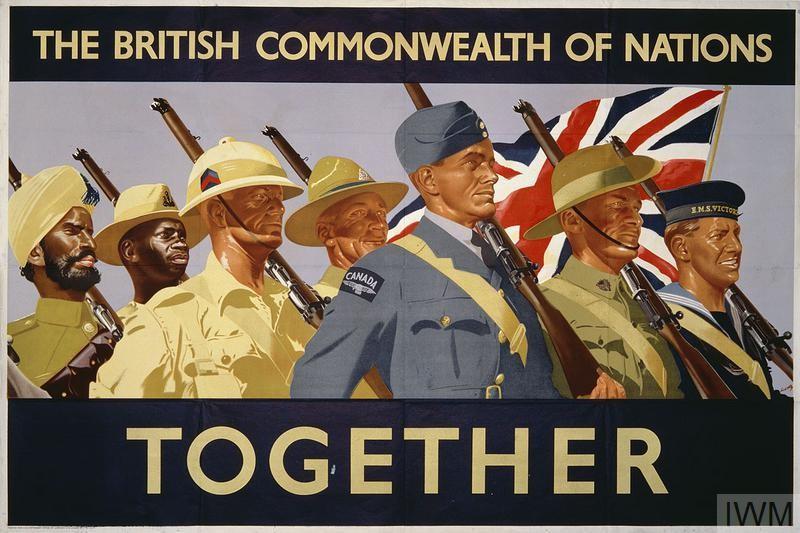 The poster 'The British Commonwealth of Nations - Together' depicts seven representatives of Commonwealth Armed Forces marching toward the right. A Union Jack flies in the background.

The British Empire and the Dominions of Australia, Canada, Newfoundland, New Zealand and South Africa made a considerable contribution to the Second World War in terms of people, raw materials, food, interest-free loans and monies which were raised for tanks, airplanes and other war material.

Over 370,000 Africans also fought for Britain. They were drawn from West and East Africa and served in several theatres during the Second World War. Large numbers of troops from both East and West Africa served as part of the South East Asia Command (SEAC) fighting the Japanese.

In addition, there were over two and a half million Indian citizens in uniform during the war. Indian servicemen served in all the theatres of war and India was also used as a base for military operations against the Japanese in places such as Burma (Myanmar).

As historian Stephen Bourne notes in his book The Motherland Calls (2012), it is impossible to determine the exact number of black servicemen and women from Britain, the Caribbean and Africa who served in the war. There was no standard way of collecting statistics and other information that would give historians today the exact totals. However, it is no exaggeration to state that citizens of Britain’s colonies and Dominions played a significant role in the war effort.

Discrimination in the British armed forces

In her work on West Indian workers and service personnel in Britain, historian Marika Sherwood has written about the colour bar in the British armed forces. Under an Army Order of 1938, entry into the British Army was restricted to men of pure European descent. The same rules applied to the RAF and Royal Navy. There were, however, some anomalies within these laws. The RAF could recruit ‘aliens’ (the official terminology), but not at the rank of officer. In the Royal Navy, ‘Maltese and Men of Colour who are the sons of British-born subjects’ were allowed to work in service roles, such as cooks, but only in places that were a long way from Britain such as South-East Asia.

During the course of the Second World War the colour bar was ‘relaxed’. Sherwood suggests that this relaxation was largely to benefit the reputation of the British government. During the war, Britain was engaged in fighting regimes which practised the worst kind of racism. The British government wanted to ensure that it did not come under any criticism from enemies or allies about the state of race relations in the British Empire.

Contributions from the Caribbean: war service and settlement

Several thousand people from the Caribbean contributed to the Allied effort in the Second World War. The majority served in the RAF, in both ground and flight crew roles. Some men had trained with the Royal Canadian Airforce (RCAF) before coming to Britain. Of the men serving in the RAF and the RCAF, 103 were decorated.

Although the colour bar in the Army was relaxed during the war, the number of West Indians recruited for the Army never matched those for the Air Force. Men from the Caribbean were more likely to serve in the RAF than the Army or the Royal Navy.

Thousands more Caribbean people served in the Merchant Navy bringing supplies to Britain from across the world. In 1940, 1,800 of these men had responded to an appeal from the Colonial Office to serve as crew for the cargo ships of the Merchant Navy. This work was dangerous, as the ships were subject to attack from enemy ships, submarines, aircraft and mines.

Men and women from the Caribbean also worked in civilian war industries in Great Britain during the Second World War. Seven hundred men came from British Honduras to work as lumberjacks in the forests of Scotland. Others worked in munitions production and as skilled tradesmen in essential manufacturing industries.

In the years immediately after the Second World War and beyond, many men and women from across the Caribbean migrated to Great Britain. The reasons were varied and the experiences also. For many it was the wartime experience that shaped their decision to move to the United Kingdom. Most of the passengers on the SS Empire Windrush, which docked in Tilbury in June 1948, were ex-servicemen seeking work.

Unemployment was an important factor which led the Governor of British Honduras to respond to the British government's request for 500 foresters to work in Britain with ‘no problem’. British Honduras was suffering from high unemployment and the authorities saw the Colonial Office's request as one way of dealing with the issue. In August 1941, 541 men left Belize, heading for Scotland.

In 1984, Amos Ford, one of the 150 foresters from Belize who worked in Britain during the Second World War, published Telling The Truth: The Life and Times of The British Honduran Forestry Unit In Scotland. Ford wrote that the British Honduran foresters had to endure difficult working conditions. They had to cope with inadequate clothing, threadbare mittens, huts poorly built to withstand the Scottish winter, uncovered trucks for transport, and lack of pay when they did not work because of bad weather.

Sam Martinez, who volunteered to join the British Honduras Forestry Unit in the Second World War, recalls a different experience:

'So long as we were keeping well that was the main thing. What's the use of moaning? Make yourself comfortable. Put on your warm suit and your warm boots. I am an all-weather person. I made my mind up that if I'm helping, then that's what's important. If I am helping I can handle anything in life.'

Sam volunteered because he saw himself as a ‘Britisher’ and felt a strong connection to Britain:

'…The government asked for volunteers, we weren’t what you called conscripted, we volunteered to come because this is the Mother Country…we were all "Britishers”.'

Sam remained in Britain after the war, living in Glasgow, and worked as a chef among other jobs, once preparing lunch for the Prime Minister Harold Macmillan. When asked later in life if he missed home Sam said,

When war broke out in September 1939 the colonies rallied to support the war effort. There were several reasons for this: loyalty to Great Britain, the mother country; adventure; to help the cause of independence or decolonisation.

For Sam King from Jamaica, motivation to serve was driven by the notion that the British Empire, despite its faults, was better than Nazi Germany, and, by his mother’s advice:

‘My son, the mother country is at war. Go. And if you survive you will not regret it.’

Sam was the eldest son in a farming family. Aged 18 he was accepted into the Royal Air Force (RAF) and trained as an aircraft fitter. Jamaicans who had served overseas during the war were made to return home and Sam returned to Jamaica in 1947 after being demobbed from the RAF. On his return to Jamaica he decided that he would not raise a family in a place where people did not have control of their education, health and welfare, and so he returned to Britain in 1948.

“I have been here during the war fighting Nazi Germany and I came back to help build Britain.”

Sam was one of 492 migrants from Jamaica who arrived at Tilbury Dock on 22 June 1948 on board SS Empire Windrush. The arrival of the Windrush is viewed as a seminal moment in post-war migration by men and women from the Caribbean.

Despite having served in the war and returning to help 'build Britain', Sam faced difficulties when trying to buy a house in Camberwell in South London, including hostility from the host nation and accommodation shortages. To help overcome these difficulties, Sam created a partnership-based house-buying scheme to assist those who would otherwise be subject to the whims of landlords. Sam eventually moved into local politics and went on to become the first black mayor of the London Borough of Southwark. 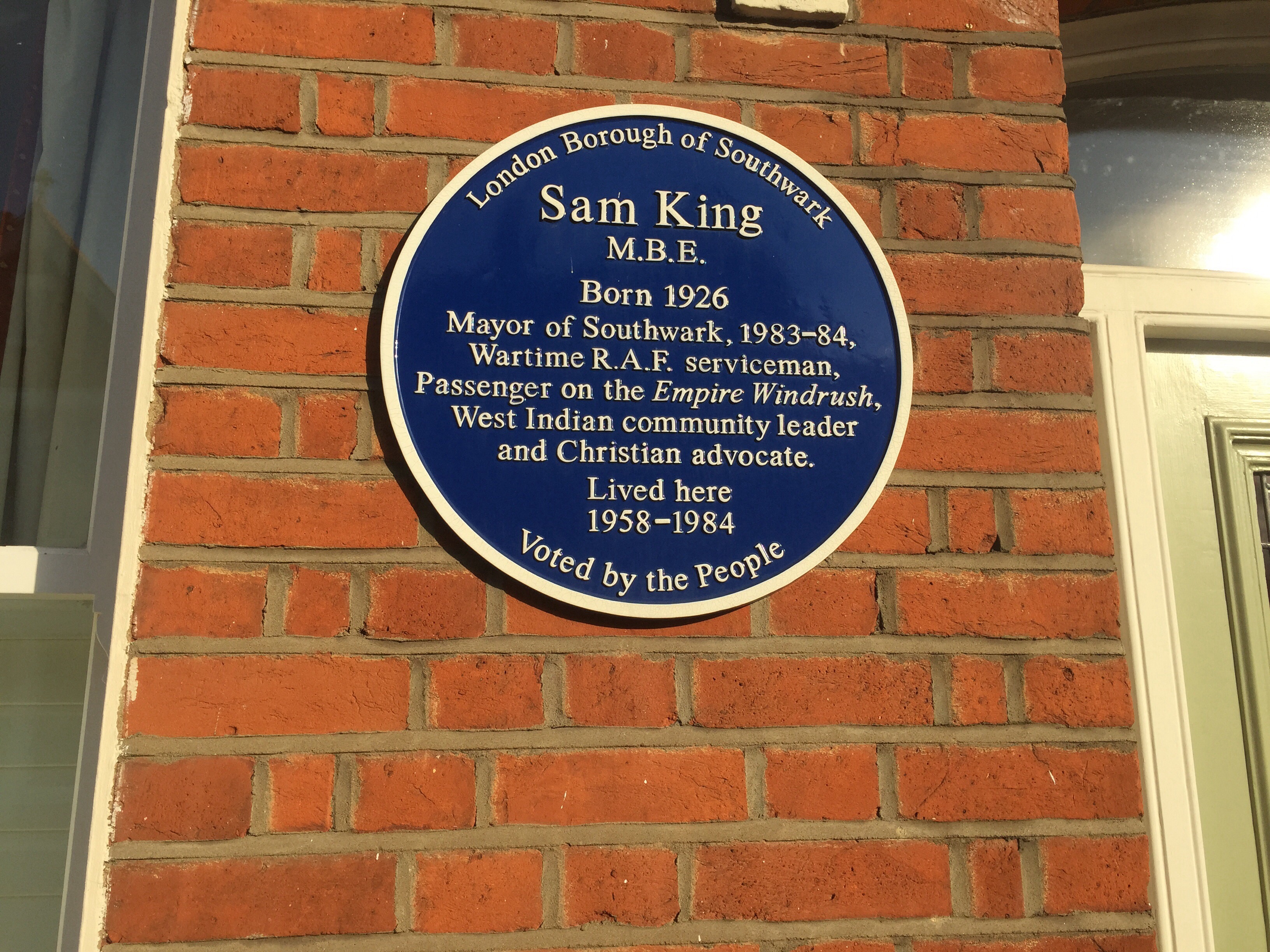 (In 2009, this blue plaque was installed at King's former home, 2 Warmington Road, Herne Hill, in the London Borough of Southwark)

Amos Ford (1985), Telling The Truth: The Life And Times Of The British Honduran Forestry Unit In Scotland

Sam King (1998), Climbing up the Rough Side of the Mountain

Angelina Osborne and Arthur Torrington (2005), We Served: the Untold Story of the West Indian Contribution to World War II

How did people share their cultures and traditions during the First World War?

The Empire Called to Arms

How Italy Was Defeated In East Africa In 1941

Canada at War – Facts and Information

The National Archives of Australia – Conflicts