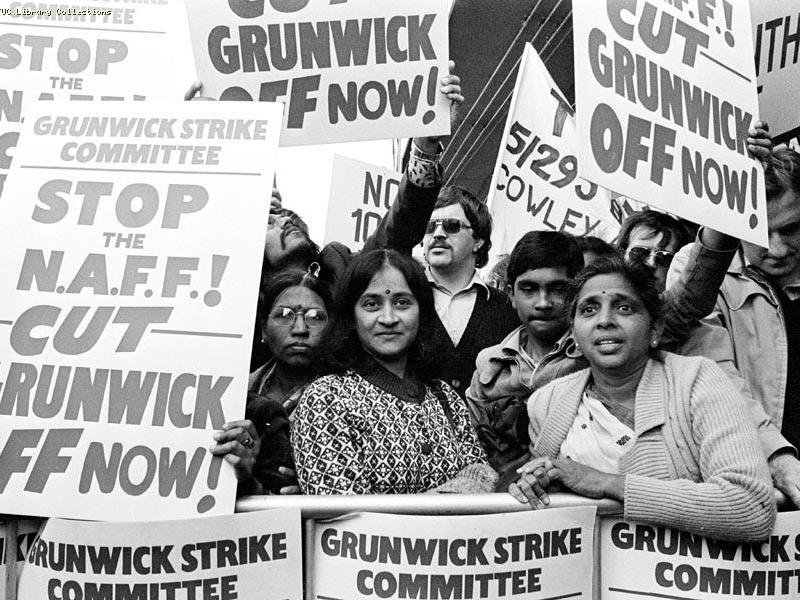 In August 1976, workers at the Grunwick Film Processing factories in Willesden, North West London took strike action against pay and conditions in the plant. This photograph shows the strikers at the TUC Congress in Blackpool in 1977 with Jayaben Desai, one of the strike leaders, front right.

Jayaben Desai was born in April 1933 in Gujarat, a province in India. Upon her marriage to Tanzania-based Suryakant Desai, she migrated to Tanzania. There she joined a prolific community of British subjects of Indian origin, who had long been settled in the East African countries of Uganda, Kenya and Tanzania.

South Asians historically migrated to East Africa for a number of reasons. There was some pre-colonial mercantile travel from South Asia to East Africa. Traders and adventurers from South Asia travelled to East Africa before British intervention and some of these people stayed, whilst some went back and forth. British colonisation brought a more sustained, larger, community of Asians to East Africa. Recruited by the British from Northwest India, indentured labourers were brought to East Africa to build the region's railways (1890s-1900). A small minority of these labourers decided to stay. These settlers were joined by later flows of voluntary migrants from present-day Gujarat and, to a lesser extent, Punjab and Goa, and included diverse castes and religions (Hindus, Muslims, Sikhs and Parsees).

Under British rule, the South Asian diaspora in East Africa lived in a divided society. South Asians came to occupy a middle position in the colonial hierarchy, with the British colonial rulers at the top and the African majority at the bottom. Most South Asians took up commerce, middle-level administrative roles in the colonial bureaucracy and petty trade, while Africans were restricted to agricultural labour. Because of this, South Asians led relatively comfortable lives in East Africa.

Things changed with post-World War II African independence. In the 1960s, many newly-independent countries in East Africa introduced ‘Africanisation’ policies, to ensure that the native African majority population acquired greater control over key areas of the economy and the government. In countries such as Kenya, Tanzania, Zambia and Malawi these policies aimed to counteract the economic dominance of South Asians and to return control of resources and wealth to Africans.  Legislation was passed which restricted residence, trade and employment opportunities for non-citizens. Many South Asians in East Africa continued to hold British passports, rather than passports of the newly independent countries. As a consequence they were negatively impacted by these policy developments. Perhaps the worst and the most life-threatening of these ‘Africanisation’ measures was Ugandan dictator Idi Amin’s 1972 decision to announce the expulsion of local South Asians.

Independence-era life in Africa was unsettled for many. There was political and economic uncertainty, with citizenship, business and social legislation constantly changing. Worried about their future, and faced with declining economic opportunities and security, by the end of the 1960s many East African Asians chose to migrate. These migrants sought refuge in a number of countries, including their colonial ‘motherland’, Britain. Although they held British passports, these migrants were not always welcome in Britain and faced discrimination in matters of housing and employment.

Jayaben Desai was one of these migrants. Her route carried her initially from Tanzania back to India in 1964; later she joined her husband in the UK in 1967.

Idi Amin’s 1972 expulsion order forced thousands of Asians to leave Uganda, abandoning their wealth and property. Each of the leavers were only permitted to take £55 in cash with them each. About 27,000 Ugandan Asians sought refuge in the UK, while smaller numbers went to Canada, India and Kenya.

The British Government responded to pressure from anti-immigration groups by creating the Uganda Resettlement Board, which divided Britain into red and green zones. The zones were designed to steer Ugandan Asians away from existing areas of minority ethnic settlement such as London, Leicester and Yorkshire. Leicester City Council even posted an advert in the Ugandan Argus newspaper telling Ugandan Asians not to come to the city. It is widely believed that the advert had the opposite effect, instead serving as a signpost to potential migrants that Leicester was a desirable destination. New migrants sought out places with established communities of Gujarati East Africans, which drew them to cities like London and Leicester. In Leicester, the textile industry also provided employment for many of the new arrivals.

Though the new Race Relations Act 1968 had come into force in Britain, making it illegal to refuse housing, employment or public services to people because of their ethnic background, these twice-migrants faced racism and prejudice, which made it difficult for them to find accommodation and certain kinds of jobs. It was in 1968 that the Conservative Party MP Enoch Powell made his infamous ‘Rivers of Blood’ speech predicting that unchecked levels of immigration would lead to violence in Britain’s cities.

Life in Britain for these migrants was difficult, not least because they no longer enjoyed an elevated social status. Although they were fluent in English and came from middle-class backgrounds, they initially had to accept work in low-paid jobs and struggled to gain better pay and rights. Migrants from Uganda, in particular, could only bring with them a small amount of money and wealth, as the expulsion order prevented them from travelling with their full assets. This meant that for many, life had to be rebuilt from scratch on arrival.

Jayaben Desai took up low-paid factory work in Britain and rose to fame for her activism whilst working at the photographic film-processing factory Grunwick in North London. On Friday 20 August 1976, when Desai was confronted with a last-minute demand for overtime, she responded:

'What you are running here is not a factory, it is a zoo. There are many types of animals in a zoo. Some are monkeys who dance to your tune, others are lions who can bite your head off. We are those lions, Mr Manager. I have had enough – I want my freedom!' 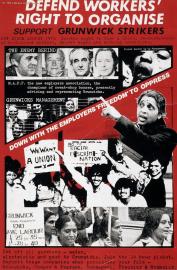 Grunwick Strike poster, 1977 (TUC Library at London Metropolitan University)
A group of workers led by Desai, walked out in protest against their treatment by their managers, and to defend their dignity and rights. The workers were protesting the lack of respect and the indignities they experienced at the hands of the management, as well as poor working conditions. This included heavy pressure to maintain a high level of production, managerial control (the women workers had to seek permission to go to the toilets), the threat of sacking and summary dismissals, and compulsory overtime, which was often demanded at short notice. For women, overtime at short notice was a particular problem, as they were often told only in the evening of a given day that they had to stay on to work longer hours. Most women had to do a ‘second shift’ of work at home – cooking and cleaning – and this created many difficulties for them. Low pay was also an issue, but their treatment by the managers – the lack of dignity and respect – was a more immediate matter that triggered the strike.

These workers realised that having a trade union at their workplace would help them fight for better rights, and thus they joined one: APEX (Association of Professional, Executive, Clerical and Computer Staff). They demanded that Grunwick recognise workers’ right to join trade unions.

Unions should have helped address issues regarding work conditions and management but, in those days, trade unions were not always willing to fight for equal rights for all workers. Unions were largely led by white men, so female and non-white workers often found it difficult to win support and representation. It was common for non-white workers to receive different pay or bonus entitlements depending on their race and gender. Many migrant workers felt that their unions were racist and supported factory management in suppressing the wages of women and non-white workers. But something special happened at Grunwick.

Support for the strikers

After Jayaben and her co-workers spent a few months picketing outside the Grunwick factory, the cause of the Grunwick strikers was taken up by the wider trade union movement of the day. The support for the workers from their trade union and from the Brent Trades Council was very important. The workers, led by Jayaben, travelled across the country and addressed workers in other factories and workplaces about their fight, and this managed to persuade trade unionists from far and wide to come to their aid. As support for the strikers grew, the size of the mass pickets increased from a few hundred to several thousands. 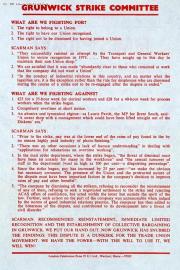 This leaflet was issued by the Strike Committee to organise a mass picket of the factory on 17 October 1977 which attracted 5,000 supporters (courtesy of TUC Library at London Metropolitan University)
By June 1977 there were marches in support of the Grunwick strikers, and on some days more than 20,000 people packed themselves into the narrow lanes near Dollis Hill tube station. The strike began in 1976 and continued for two long years until 1978. This was possible, as the strikers received strike pay from the trade unions, which was comparable to the low pay they received at Grunwick.

As the size of the pickets grew, the then Labour government put pressure on the trade union leadership to rein back the strike. Meanwhile the owner of Grunwick was supported by right-wing organisations and refused to accept mediation or the recommendations of a government inquiry, which found in favour of the workers. It was in this context that the trade union withdrew its support for the Grunwick strikers. But Jayaben Desai and the strikers were undeterred. They mounted a hunger strike outside the Trades Union Congress headquarters on a cold day in November 1977. But even this action could not change the unions' mind, and so they had to call off the strike.

Impact of activism at Grunwick

Although the lengthy Grunwick dispute did not end in success for the strikers, Desai remained optimistic about their sustained efforts. Aware of the long-term impact of the activism, she said:

‘Because of us, the people who stayed in Grunwick got a much better deal. When the factory moved, the van used to come to their home and pick them up because it was difficult for them to get to the new place. Can you imagine that? And they get a pension today! And we get nothing. That was because of us, because of our struggle.’

Despite the defeat, Grunwick is remembered for the way in which thousands of workers, black and white, men and women, united to defend the rights of migrant women workers. Grunwick also challenged the stereotype of South Asian women as passive. In recognition of her contribution to the struggle for workers’ rights, Jayaben Desai was awarded with a gold medal by the GMB trade union in 2007. She died in December 2010, aged 77.

University of Leeds - a timeline of the Grunwick strike

Jayaben Desai’s story tells us about the response to East African Asian migrants in the 1960s and 1970s. They were both unwelcome, yet simultaneously in demand as cheap labour, and exploited in these positions.