Germanophobia and World War I 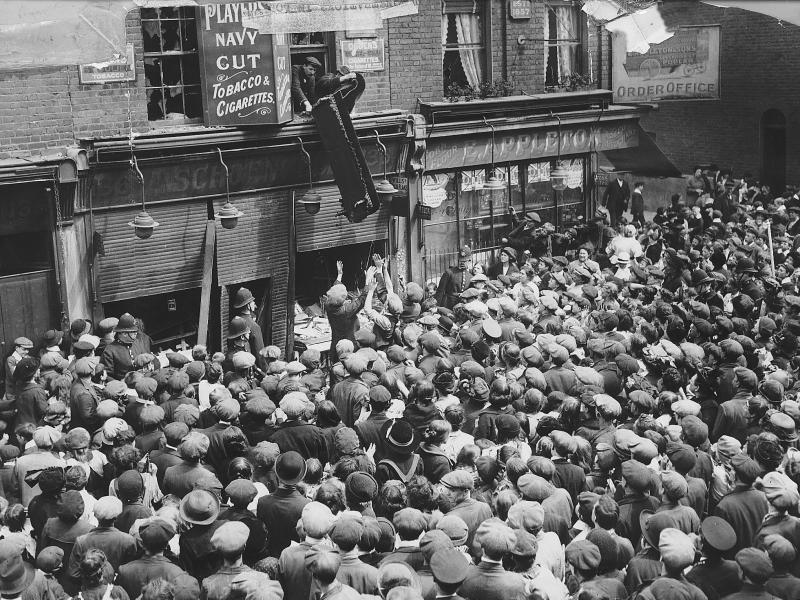 This photograph source details an anti-German riot in full flow in Chrisp Street in Poplar in the East End of London on 12 May 1915. It is unclear who took the picture but the photographer appears to be standing in a building opposite the shop where the attack is taking place.

Germans in Britain before World War I

During the course of the nineteenth and early twentieth centuries tens of thousands of Germans made their way to Britain. The factors that pushed them out of their country of birth included a rising population and the relative intolerance of Germany compared with the more liberal Britain at the time. Throughout the nineteenth and early-twentieth centuries migration from Germany to the British Isles worked on the basis of networks, whereby those who moved had a connection with a group already within Britain, either as a result of the region of the migrants’ origin (especially Hanover and Württemberg) or because of occupational networks, including, for example, networks of teachers, bakers and waiters. Germans from these regions or professions who were already in Britain made it easier for their compatriots to migrate.

Germans settled in locations throughout the country but concentrated especially on London, where about half of them lived. By 1900 most were concentrated in the East and West End of the capital. According to the 1911 census 53,324 German immigrants resided in Britain. They found themselves in a wide variety of social positions by the beginning of the twentieth century – from those relying on German charities to merchant bankers and industrialists. In between came a variety of occupational groups.

Although the poorly paid and physically demanding occupation of sugar boiling employed many East End Germans in the nineteenth century, by the beginning of the twentieth century Germans increasingly became involved in ‘service industries’ especially as governesses and school masters. Germans became particularly important as waiters by 1911, making up 10 per cent of this occupational group in London. They also started to open up small businesses, especially as barbers, bakers and butchers throughout the whole of Great Britain. These German-owned enterprises usually employed other Germans, some of whom would eventually establish their own shops.

By the outbreak of the First World War the Germans had become an integrated minority. They had, however, maintained their distinct identities, evidenced by the establishment of German clubs, which catered to a variety of occupational groups, and German newspapers and churches, the latter of which existed throughout the country. Although the German migrants usually married other Germans, either before their arrival or once settled in Britain, relationships with Britons had become normal by the middle of the nineteenth century. Hostility towards the Germans certainly existed, although it remained relatively mild and fairly dormant. The rise of German power from the end of the nineteenth century, however, led to the birth of the idea of Germans in Britain as spies in the service of their ‘Fatherland’.

Impact of the First World War on German communities in Britain

Nothing could have prepared the Germans for the level of hostility that they would face in Britain during the First World War. A combination of government measures and public opinion destroyed the communities that had emerged by 1914.

Immediately after the outbreak of War, the Aliens Restriction Act meant that Germans could not move more than five miles and had to register with the police. The Act also eliminated all German newspapers and clubs. A series of measures also closed down all of the German-owned businesses in Britain and confiscated property and assets without compensation for the owners. Most dramatically, the government introduced a policy of wholesale internment of males of military age (17–55) which meant the destruction of the German family in Britain.

Camps emerged throughout the country with the largest, Knockaloe, situated on the Isle of Man and holding over 23,000 men at its peak. The government deported German women, children and the elderly throughout the War and also sent away males upon release from internment, meaning just 22,254 Germans remained in Britain by 1919. Such actions received wholesale support from public opinion. Newspapers became littered with stories about German spies and constantly demanded an intensification of internment. By 1918 ideas circulated about a German ‘hidden hand’ that controlled Britain and prevented military victory. Individuals with any connections with Germany faced vilification. The Royal Family, of German origin, did not remain immune and changed its name from Saxe-Coburg to Windsor in 1917.

Anti-German strikes also took place to eliminate German workers. Anti-German organisations came into existence, most notably the British Empire Union which called for the ‘Extirpation – Root and Branch and Seed – of German Control and Influence from the British Empire’.

The most serious manifestation of Germanophobia consisted of anti-German riots which broke out on several occasions, above all following the sinking of the passenger liner Lusitania by a German submarine off the coast of Ireland on 7 May 1915 resulting in 1,198 deaths. Most national and local newspapers made a direct connection between those Germans living in Britain, many of whom had resided in the country for decades and had become an integrated part of society, and the actions of the German army. This construction of a universal enemy by the Press played a central role in the violence which followed. The riots began in the home port of the Lusitania, Liverpool, but spread like wildfire to the rest of the country meaning that virtually every German-owned shop in the country had its windows smashed. London became especially affected so that 1,950 properties came under attack.

The striking things about the pictures and video footage of the riots include the number of people involved and the consequent powerlessness of the police to prevent looting as they were overwhelmed by the scale of violence that took place in the capital and the country as a whole. The precise targeting is especially notable because while the property of A. Schoenfeld  in the picture above faces complete destruction, that of his English neighbour, E. Appleton, remains untouched. Used together with other sources such as the supplementary account from The Times, this picture provides a clear documentation of the level of hatred which faced an integrated migrant group during the First World War.

Panikos Panayi (1991), The Enemy in Our Midst: Germans in Britain During the First World War