Somali seafarer Ibrahim Ismaa’il: from Cardiff to the Cotswolds 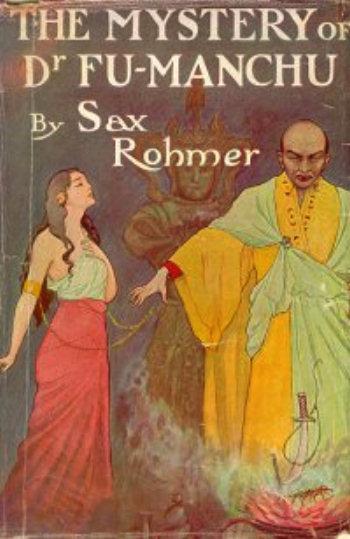 The picture above is the cover of a British book published in the early twentieth-century, The Mystery of Dr Fu-Manchu by Sax Rohmer. The novel, published in the era of 'Yellow Peril', featured stereotypical depictions of Chinese people in Britain and abroad.

Rohmer's way of understanding and writing about Chinese people in Britain is countered in the work of a Chinese-born author from the same era, Lao She, and also clashed with the facts of Chinese people's lives in London's docklands at this time.

British expansion in China and Chinese people in Britain

The years leading up to the Boxer Uprising in 1899–1901 had seen a period of concerted British expansion in China. As soldiers, missionaries and merchants set sail from Limehouse Reach to defend and extend Britain’s Chinese interests, a small Chinatown developed along the capital’s dockside streets and also in the port cities of Liverpool, around Pitt Street, and Cardiff’s Tiger Bay area. Some Chinese sailors jumped ship and settled, opening lodging houses, provisions stores, cafes, association halls, and laundries to cater to the transient seamen and indentured labourers that could be signed on by British merchant shipping companies in China’s treaty ports for less than half the wage of a British seaman.

By 1890 there were two distinct, if very small, Chinese communities living in East London’s dockside neighbourhoods. Chinese men from Shanghai stayed around Pennyfields, Amoy Place and Ming Street and those from Guangzhou (Canton) and Southern China lived on the other side of the West India Dock Road on Limehouse Causeway. The lack of fluency in the English language of many Chinese migrants added to the hostility they received from British seamen and led to cultural segregation. Gradually the streets of Pennyfields and the Chinese Causeway, as it became known, began to be transformed by colourful shops and cafes serving Chinese food, their interiors an exotic contrast to the generally drab surroundings of Limehouse. One more positive press story, from the Gentleman's Magazine reported that ‘the Chinese shops are the quaintest places imaginable. Their walls decorated with red and orange papers, covered with Chinese writing indicating the "chop" or style of the firm, or some such announcement. There is also sure to be a map of China and a hanging Tung shing Chinese Almanac.’

As with other migrant communities in Britain, as Chinese settlement continued, local feelings towards in-coming migrants grew worse. In 1901 when the first Chinese laundry opened in Pennyfields it was immediately stoned by a hostile crowd. In 1908, in opposition to cheap Chinese labour, crowds of angry British seamen prevented Chinese seamen from signing on as ships' crew. In this instance Chinese people had to return to their boarding houses under police escort to avoid being attacked.

In response to the general increase in anti-Chinese aggression from around 1900–1910, Chinese Mutual Aid associations were set up in London and Liverpool. In 1911 in Cardiff, every one of the city's 30 Chinese laundries was attacked by local mobs. During this time, the first report on the Chinese in Britain was commissioned by Liverpool City Council amidst concern over Chinese men marrying English women, and worries about gambling and opium-smoking. Despite the negative feeling amongst local men, the city’s Chief Constable said he felt the resident Chinese were ‘quiet, inoffensive and industrious people’.

Chinese seamen were well liked by local women as they were seen to be hard working, did not often drink alcohol and took care of their families' welfare. By 1918, the number of Chinese people living in Pennyfields totalled 182; all were men and nine of them had English wives.

As more Chinese seamen began to settle in the ports of London and Liverpool, a powerful set of myths began to develop about them and ‘Chinatown’. Throughout the 1910s, politicians manipulated local fears about cheap Chinese labour and writers of popular fiction began to exploit the dramatic potential of Chinese Limehouse in London as a locus of drug-trafficking, gambling and the sexual ensnarement of young white women. The 1913 publication of the first Sax Rohmer tales about the evil Dr Fu-Manchu started a near-hysterical interest in London's Limehouse, where it was said that sinister ‘Chinamen’ lured innocent white women into their opium dens. This exotic underworld was featured in countless novels, films and songs, and the stereotype of the Chinese as mysterious criminals became firmly engrained in Western popular culture. 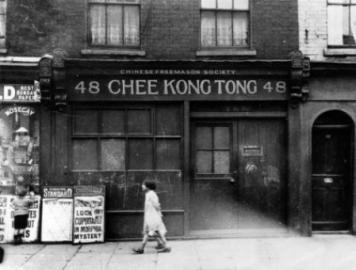 These stereotypes, linked to anxieties and paranoia about the way East Asia might compete with or threaten ‘Western civilisation’ are often referred to today as ‘Yellow Peril’ myths. ‘Yellow Peril’ stories and ideas can be found in American and continental European newspapers, novels and even laws (the U.S. had a Chinese Exclusion Act in 1882 that suspended Chinese immigration for ten years). In Britain, ‘Yellow Peril’ ideas date back to the eighteenth century but were intensified after Britain won the Opium Wars against China in 1839–42 and 1856–60. It was believed that the Chinese who came to settle in Britain’s port cities in the nineteenth century might be plotting revenge against their war losses and could not be trusted.

Such was the notoriety of Chinese Limehouse that by the mid-Twenties the travel agents Thomas Cook laid on excursion bus trips for tourists (who were generally disappointed by their journeys until Thomas Cook began hiring people to stage hatchet fights) and it was commonplace for West End revellers, after a couple of champagne cocktails, to go slumming ‘down Chinatown way’.

Yet even at its height during the 1930s, London’s Chinatown consisted of only about 300 residents. While the Chinese presence loomed large in the British imagination, and despite considerable British incursion into China, there were relatively few Chinese immigrants in Britain. Official scrutiny together with ‘Yellow Peril’ sensationalism had established an overall climate of exclusion from British society. British labour unions were vigilant against the employment of Chinese seamen, while the effect of the wartime Defence of the Realm Act (1914) and its ban on opium use had been to criminalise a significant number of Chinese, giving the authorities the ability to organise deportations.

Lao She in London

Between 1924 and 1929 Lao She, one of China’s most renowned novelists, was a young man making his way in London. He spent his days teaching Chinese at the School of Oriental Studies, in those days located at Finsbury Circus in the east of the city; and during his spare time he devoured works of English literature in the school’s library, especially the works of Charles Dickens. In the evenings Lao She dined on the invariably bland food provided by a series of landladies with the occasional trip to Limehouse for Chinese cuisine when he felt homesick. 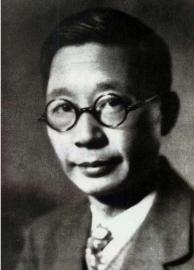 During the years he spent in London, Lao She wrote three novels, including Mr Ma and Son, the tragicomic story of a father and son whose attempts to settle in London are met with suspicion. Within the pages of Mr Ma and Son, Lao She expressed his resentment of imperialist bigotry and Christian hypocrisy, as well as his fascination with and admiration for aspects of English culture and his self-disgust for China’s failure to stand up for itself in the world. It was the first Chinese novel to directly confront British racism towards China.

The studious, glasses-wearing Lao She was the opposite of the cartoon image of a ‘Yellow Peril’ ‘Chinaman’, which was popular during the age of British Empire. Like many migrants, he had a complicated relationship with Britain. As a student in Peking he had participated in China’s growing movement for cultural reform which drew on Western science and philosophy to modernise China. But Lao She’s father had been killed while fighting Allied soldiers during their invasion of Peking during the Boxer Uprising of 1901. Lao She was just a baby when Allied soldiers ransacked his home and narrowly escaped being killed himself as he was hidden beneath an upturned trunk. Lao She resented the Western empire and its cruelties but was also appalled by China’s corrupt warlords who, after the collapse of the Qing dynasty in 1912, were blocking the creation of a functioning republic. He also studied English and converted to Christianity, taking classes run by the London Missionary Society who organised his teaching post in London. His novel, Mr Ma and Son, not only represents the experiences of Chinese residents of Limehouse, it also shows Lao She’s ambivalence towards a country that he admired in many respects but which had caused hardship for his family and the Chinese people.

The decline of Limehouse's Chinatown

The existence of a Chinese community in London’s Docklands was short-lived. As early as the 1920s, slum clearance in Limehouse hastened the decline of Chinatown. Many of the houses occupied by the Chinese were described as very old and in some cases they were in extreme external ill-repair. Internally, however, most were clean, uncrowded, vermin-free and less susceptible to infectious disease than their English neighbours.

Census figures indicate that the movement of the Chinese to the West End and the suburbs was accelerating by 1931. In 1934 Limehouse Causeway was widened and a maze of alleys and side streets, including several occupied by Chinese businesses and lodging-houses, were demolished. But the primary causes of the long-term decline of the Chinese community in the area were to do with the port. In 1895 an article in the Gentleman’s Magazine stated that Chinatown in Limehouse was no more than a single street of shops and boarding-houses: ‘It exists by and for the Chinese firemen, seamen, stewards, cooks, and carpenters who serve on board the steamers plying between China and the port of London.’

It was this maritime dependence which generated the rapid growth of Chinese businesses in Limehouse during the First World War. And it was this dependence which hastened the decline of Chinatown in the 1930s. Chung Chu, who kept a café on Limehouse Causeway, said in 1931 that the loss of shipping entering the London docks was killing the Chinese population. There were now about a hundred families living in the area but they were moving away as there seemed to be no future for Anglo-Chinese children there: ‘the boys find work hard to get, and the girls drift about the streets ostracised by white girls of their own age’.

Much of the area was damaged by aerial bombing during the Blitz in the Second World War, although a number of elderly Chinese still chose to remain. After the war, the growing popularity of Chinese food led to an increasing number of Chinese restaurants being opened in the West End to service late-night theatre- and club-goers. In the 1960s an influx of immigrants from the British territory of Hong Kong led to the establishment of the present-day Chinatown in Gerrard Street, off Shaftesbury Avenue. By the 1970s, Soho’s Chinatown was truly established as a centre for London’s Chinese community – now numbering in the tens of thousands.