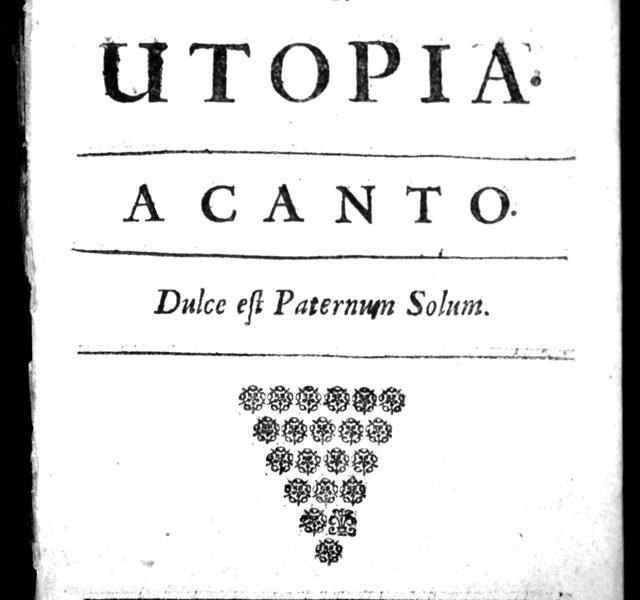 Published in 1709 by the Booksellers of London and Westminster and sold for 2d, ‘Canary-birds naturaliz’d in Utopia. A canto’ was intended to manipulate public opinion against the Bill for the Naturalization of Foreign Protestants, which was going through Parliament that year. The title was inspired by the canaries that the Huguenot silk weavers of Spitalfields kept in bird cages besides their looms to entertain them while they worked.

From 1681 Huguenot refugees to Britain could obtain a patent of denization, which brought with it the right to own property. Naturalisation, which brought additional rights of inheritance, was possible by private Act of Parliament, but it was expensive. A private bill could cost £50 or £60. Despite strong native opposition, an Act of General Naturalisation was passed in 1709, but was soon repealed.

Huguenot refugees sat at the centre of the London silk industry. Most of the Huguenots in Britain involved in the silk trades had been merchants, master weavers or journeymen in various textile industries in their former lives in France. They came mainly from Northern France, Bas Poitou or Nimes and brought capital and business sense with them to England. Some came to London via Amsterdam or settled first in Canterbury, while others joined relatives already established in the city. They were accepted by the Weavers’ Guild and made Black, Plain, Fancy and Flowered silks.

Some of the most celebrated designers of silks were Huguenots and five of the seven identified designers working for the Spitalfields silk industry in the first half of the eighteenth century were of Huguenot origin. From Spitalfields, silk weaving skills spread to Macclesfield, as well as Sudbury, in Suffolk, where silk weaving is still practised.

In 1753 the Lyons Chamber of Commerce reported that ‘the epoch of 1685 [when Huguenots came to Britain] was fatal for our industry because it occasioned new establishments in England and Holland’. In 1914 there were still 46 silk weaving workshops in the Bethnal Green and Spitalfields areas of East London.

One Huguenot silk weaver was James Leman, a second-generation Huguenot émigré who unusually combined his skills as a designer with his role as a master weaver. 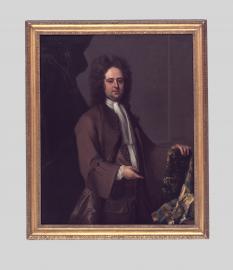 This portrait of James and many of his designs for silks can be found in London’s Victoria and Albert Museum. The portrait was given to the V&A by Paul Minet who was also of Huguenot descent (Courtesy of Victoria and Albert Museum, London)
Leman was born in 1688 into a weaving family of Huguenot descent. In 1702 he was apprenticed to his father, Peter, and lived with his family in Stewart Street, Spitalfields in London. He became a famous figure in the textile community rising to second in command of the Weavers’ Company, the ancient guild that controlled the craft in the City of London.

A constant supply of fashionable new designs from which to create new silk lines was required, so patternmakers and master weavers like James Leman supplied a wide range of designs for different weavers. The Victoria and Albert Museum in London holds an album with designs for woven silk by James Leman, known as the Leman Album. This album contains more than 90 designs for woven silks and includes some of Leman’s work from the period 1706-1716, as well as five designs from the 1730s. The earliest patterns in the album date from when James was eighteen and are the earliest known collection of designs for silks in the world. Many are signed ‘made by me, James Leman, for my father’. They feature bold colours and natural and invented flowers, geometric patterns and architectural elements. On the back are explanations of how to translate the design into the woven cloth. They used metal threads which came alive by candlelight. A plain gold thread was called ‘pail red’; orange indicated ‘frost gold’ and blue indicated ‘frost silver’. The design featured below is for fine woven silk cloth and is dated 15 July 1709. Leman's inscription on the design states that it was made for his father Peter Leman, showing that he drew it while still an apprentice.

Although Huguenots were central figures in the development of the London silk industry, responses to their arrival and to the prospect of their naturalisation in Britain were mixed. The main source Canary-birds Naturaliz’d in Utopia: A Canto, provides an example of different responses to the prospect of French Huguenots being naturalised in Britain.

The canto introduces native birds led by honest Robin, followed by chirping Sparrow, charming Linnet, soaring Lark, peerless Nightingale, and Turtle Dove, who set out the arguments against naturalising foreign Protestants.  To pass the naturalisation bill, these native birds argue, would undermine the native perception of liberty ‘making Magna Charta An useless Jest of Magna Farta’. The 50,000 Huguenot refugees who made Britain their new home between 1685 and 1725 were perceived as 'filling … our feather’d Nation’. The text reads, ‘Here they grew fat, and liv’d at Ease/ And bigger look’d than Refugees;/ Kindly protected from the Stroke/ Of swift pursuing Gallick Hawk’. ( 'Gallick Hawk' refers to the French reaction to the exodus of Protestants from France – the endeavour to prevent escape and force conversion to Catholicism. A hawk is a bird of prey and Gallick is another word for French, derived from 'Gaul' the Latin name for France).

The native Robin is afraid of losing his property given ‘such interlopers come, And turn me out of House and Home’; Sparrow anticipates the threat of starvation ‘Perhaps in Time they’ll take, forsooth, The Bread out of our Natives Mouth’... to ‘natralize 'em is a Jest; Let’s not defile our own dear Nest’. Linnet complains that intermarriage with these immigrants will dilute the integrity of his identity that ‘they’ll[?] make our State That’s noble now, degenerate, And mixing their unge’rous Blood, Like Cucko’s, bring a spurious Brood’. Lark complains that the immigrants are not able to work the land; he affirms that the Canaries will ‘neither graze, nor plow nor sow’ as their skills lay in manufacturing‘. In good Mechanicks their Trades follow, And let your fruitful Fields lie fallow’. Nightingale fears that the immigrants would not be trustworthy and warns that canaries would betray the natives to the Gauls (French) and recommends ‘With Caution then let’s give our Votes,/ Gainst cutting our own Subjects Throats’. Turtle-Dove is concerned that he may have to marry ‘a Canary-wife’ or lead a ‘widow’d Life’.

On the other hand, native birds like the bullfinch, magpies, great bustards, redstarts and marine birds all speak in favour of the Bill (these are all marine birds, who were used to crossing the seas between Britain and Europe and would therefore understand the importance of migration). Bullfinch maintains that the canaries came ‘for Refuge in Peace not War’ and that they ‘bring us Dainties’ which best please ‘the Lady’s flaunsing Air’; they are the source of the finest ribbons, gloves, wigs and polished gems, shoes, perfumes and silk stockings. They introduce a standard of education which breeds 'the finest Gentleman’. The bullfinch further recommends ‘Let them as Master-workmen live; And to their Arts Precedence give; Then to inferior Labours turn ye:  Let poorer Natives but Work Journey (by the day or journée) or to these Refugees abandon Your shops and Tools, or Ground you stand on’. The great bustards assured the assembly that ‘Canaries are industrious People, We ought not them again back repel, But make ‘em all here freest Denizens; With our own Birth-rights juster Benisons’; The Redstarts demonstrate that the canaries had helped to defend the nation and will 'breed and will recruit our Armies’; the marine birds maintain that the canaries would advance our foreign traffic and ‘increase our Commerce to the Indies';  the argument was ultimately resolved by the Eagle, king of the birds -‘Ye need not start a lasting Fever, Canaries here can’t live for ever’.

Real-life Canary Birds won the day and the vote to pass the Naturalisation Bill was carried.

Robin Gwynn (1985), Huguenot Heritage: The History and Contribution of the Huguenots in Britain

Natalie Rothstein (1990), Silk Designs of the Eighteenth Century In the Collection of the Victoria and Albert Museum, London, with a Complete Catalogue

Victoria and Albert Museum – the museum recently acquired a length of unfaded silk, woven to one of James Leman’s designs, which demonstrates the spectacular brightness and richness of Leman’s work. It is published for the first time in V&A Magazine Issue number 40, Summer 2016 (Sherman and Turner, ‘Research by design’)

For more on how silk weaving skills spread from Spitalfields to Macclesfield, and Sudbury in Suffolk where silk weaving is still practised, see Sudbury Museum Trust, Humphries Weaving and Macclesfield's Silk Museum.

Leman’s designs for silks were acquired by the museum in 1991 with the support of the Art Fund and the National Heritage Memorial Fund. Have a look at his designs on the V&A website and consider: